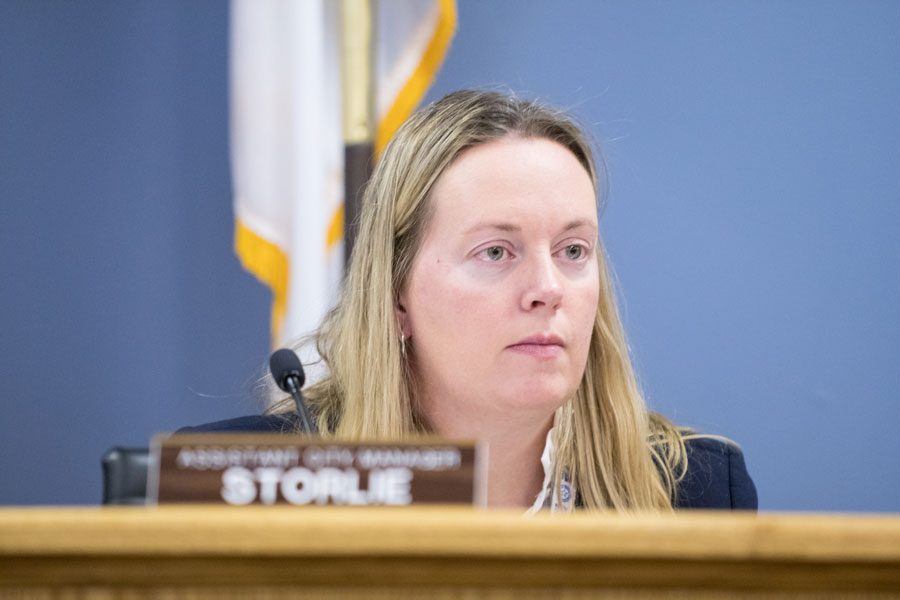 Interim city manager Erika Storlie at a council meeting. The Rules Committee voted Monday to hire a firm to conduct the search for a new city manager.

The Rules Committee voted 5-2 on Monday to recommend City Council hire GovHR USA to conduct the search for city manager, voting against having the council interview multiple firms.

The firm will find a replacement for Wally Bobkiewicz, who moved to Issaquah, Wash.after spending 10 years as Evanston city manager. Currently, interim city manager Erika Storlie will serve in the role until the search concludes.

All three firms are within a similar price range, though GovHR is the only one located in Illinois, according to city documents. The city has also used Gov HR in the past when hiring the chief of police, the parks and recreation director and the business diversity compliance officer.

Considering the additional cost of hiring an out of state firm, Ald. Peter Braithwaite (2nd) recommended to the committee they scrap the interviews and move forward with hiring GovHR.

However, during the Sept. 24 meeting both Ald. Cicely Fleming (9th) and Ald. Robin Rue Simmons (5th) — who was not present at the Rules Committee — had discussed their issues with the firm due to a lack of diversity among the firm’s associates.

“This is a very important job,” Fleming said. “We should not just go with somebody because they are close or we have used them before.”

However, Braithwaite said that of the three employees GovHR hired for Evanston, two have been black and one a member of the LGBTQ community.

Ald. Ann Rainey (8th) also praised GovHR, saying the firm’s work in the past for the city has been “tremendous.” Rainey also said that the concerns over their diversity within leadership were not the only thing to consider when hiring them.

In the vote, Fleming and Ald. Tom Suffredin (6th) were the only two aldermen to vote against hiring GovHR.

During the Sept. 24 council meeting, Mayor Steve Hagerty stressed the importance of this search, stating that the selection may be the most important responsibility of the council.

“We have several great firms here, but time is of the essence.” Hagerty said during the Rules Committee. “We talk about using firms that are in this area, this firm has worked for us before, there is an immaterial difference in price and I think we should get going.”