Men’s Soccer: Northwestern gets blown out on the road against Michigan 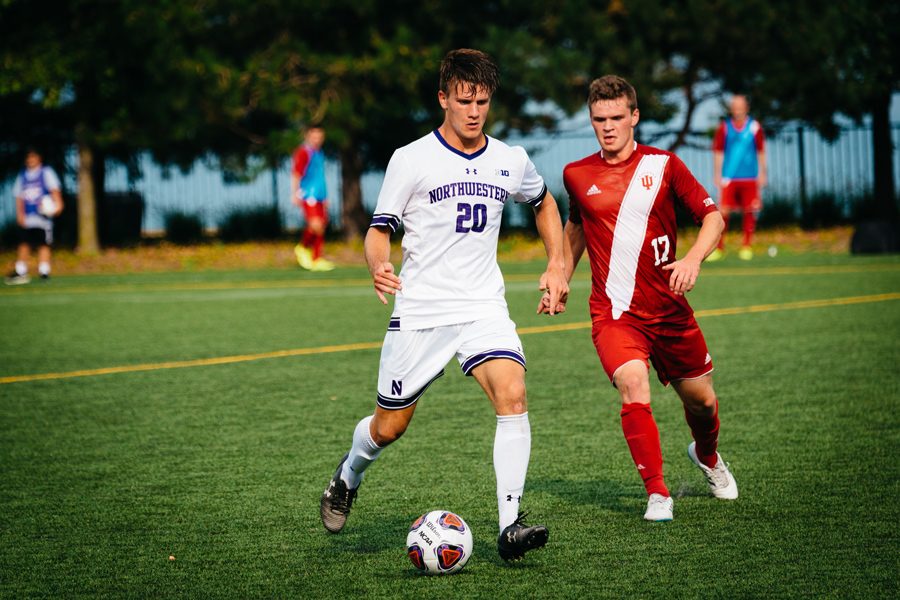 Ty Seager dribbles the ball. The senior forward led the team with three shots on Sunday.

Lenahan had Northwestern play three across the middle in an attempt to slow Michigan’s offense and flank the two forwards in the first half. However, after the Wolverines’ offense fired six shots and two corner kicks in 45 minutes, Lenahan switched the Wildcats back to their regular formation, so NU could attack and break a 0-0 tie.

“The better team won today,” Lenahan said. “We got outplayed on both sides of the ball. We did okay at first, absorbed some pressure. (But) it was a tough matchup with their athleticism and attack. We had trouble with their press and their lowballs.”

NU’s offense fired on all cylinders at the start of the game, highlighted by freshman Ugo Achara Jr. attempting a bicycle kick within the first minute. Senior forward Ty Seager almost scored in the 21st minute, stopped by Michigan goalie Andrew Verdi, who made a diving save.

For the rest of the half, the Wolverines went on the offensive. Michigan defender Jackson Ragen fired a shot in the 23rd that Miha Miskovic saved with his shin, graduate forward Nebojsa Popovic had his header bounce off the crossbar in the 24th and Derick Broche’s turnaround shot in the 36th faked out the Cats defense and rolled short of the goal.

Lenahan said NU prided themselves on their strong defense, but due to Michigan’s attack, the coach decided to experiment with different tactics and player combinations.

The Wolverines continued to flow in the second half despite the changes, with NU countering by constantly clearing the ball.

However, in the 53rd minute, the Wolverines finally scored.

Hallahan, during a corner kick, sent the ball high and found Regan, who headed the ball to midfielder Carlos Tellez. The junior fired the ball off his right foot past the shoulder of Cats goalie Miha Miskovic. Michigan added a second goal less than four minutes later.

Despite starting Achara Jr., the Cats couldn’t get anything going on the attack, finishing the half with four shots, to the Wolverines’ 11. Additionally, it didn’t help that point leader and sophomore midfielder Bardia Kimiavi didn’t play on Sunday.

Michigan sealed the game with an impressive goal in the 78th, as Farouk Osman “megged” Miskovic, shooting the ball directly between his legs.

Lenahan said the hardest games are behind NU because the squad already played three of the best teams in the Big Ten. However, he said the Cats need to have the fortitude to know what it takes to defeat a Big Ten opponent, especially on the road.

As the team prepares to face Loyola at Martin Stadium on Wednesday, Lenahan knows how important this coming stretch of games are.

“This is what the season comes down to,” he said. “We control our destiny.”