Augustine: Forgiveness should be a choice 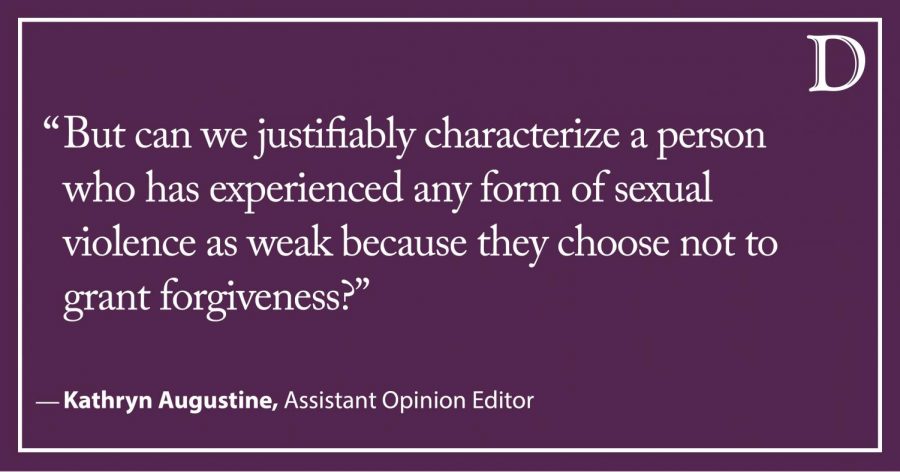 We are hardwired to respond with forgiveness when we are wronged. When another child stole our toy and meekly mumbled, “I’m sorry,” we were taught that the polite and correct thing to do was respond with the automated, “It’s ok,” regardless of whether we thought it was okay or not.

In the everyday context of a raging fight with your best friend or someone breaking a piece of your property, forgiveness is essential. Naturally, everyone has hurt someone else on occasion. Without forgiveness, relationships could not function or last. That being said, forgiveness should be a choice, especially in the case of sexual assault and other serious violations.

“The weak can never forgive. Forgiveness is the attribute of the strong,” says Mahatma Gandhi. But can we justifiably characterize a person who has experienced any form of sexual violence as weak because they choose not to grant forgiveness? You are not weak because you can’t bring yourself to forgive someone who deeply hurt you.

The ramifications of sexual violence include depression, flashbacks, self-harm, sexually transmitted infections, substance abuse, dissociation and eating and sleep disorders. Experiencing sexual assault can provoke post-traumatic stress disorder and suicide. Given the emotional and physical trauma that results from sexual violence, someone who was on the receiving end may not want to forgive, and that is entirely valid.

The individual may feel that they are relinquishing their power once again if they decide to forgive. Or the individual may believe that the perpetrator is not remorseful for the pain they inflicted. Perhaps the individual has tried again and again to let go, and is emotionally exhausted from processing the assault. However, the personal reasons behind withholding forgiveness does not matter. The decision not to forgive should be respected, regardless of the justification.

Despite these consequences, there is an both direct and inadvertent pressure on individuals who’ve experienced sexual assault to forgive their perpetrators. Why is there so much pressure to forgive, even in the absence of a genuine apology from the perpetrator?

An emphasis on forgiving all wrongdoings, regardless of magnitude, is especially profound in religious communities. This past April in honor of Easter, Pope Francis declared “If you do not forgive, God will not forgive you.” But given the Catholic church’s history of sexual assault, this begs the question, what about the community of individuals who faced sexual abuse at the hands of priests? If they do not forgive or actively try to forgive these priests, can they not expect forgiveness?

In these situations, a power dynamic is at play, nudging churchgoers to forgive, when the perpetrators abusing their status are the same people who propagate the necessity of forgiveness.

In Central Pennsylvania, a woman named Kay was excommunicated from her Mennonite church for not forgiving her husband, a registered sex offender and refusing to welcome him back into her home. In her particular case, forgiveness was mandated and intertwined with the forgive-and-forget philosophy. The emphasis on forgetting and moving past the offense entirely is particularly dangerous and strips the perpetrator of accountability.

Sometimes, friends and family may subtly imply that forgiveness is expected through comments in passing such as “I know I’d forgive someone who assaulted me” or “You need forgiveness to heal.” While not intentionally harmful, these statements support the notion that forgiveness is the next logical step.

Forgiveness, when the perpetrator is understanding and remorseful, can be healing. However, in a culture that frequently allows perpetrators to deny what they’ve done, forgiveness will always benefit the abuser and not always the person who was assaulted. If an individual who has experienced sexual assault and wants to forgive for a sense of personal peace and comfort, they have every right to do so. However, healing does not always entail forgiveness. Healing can look like avoiding interaction with the perpetrator, confiding in family and friends or channeling that hurt into helping others. Everyone has their own manner of dealing with traumatic violation, and forgiveness should always be presented as an option but not the necessary solution for coping.

Kathryn Augustine is a Medill sophomore. She can be contacted at [email protected] If you would like to respond publicly to this op-ed, send a Letter to the Editor to [email protected] The views expressed in this piece do not necessarily reflect the views of all staff members of The Daily Northwestern.