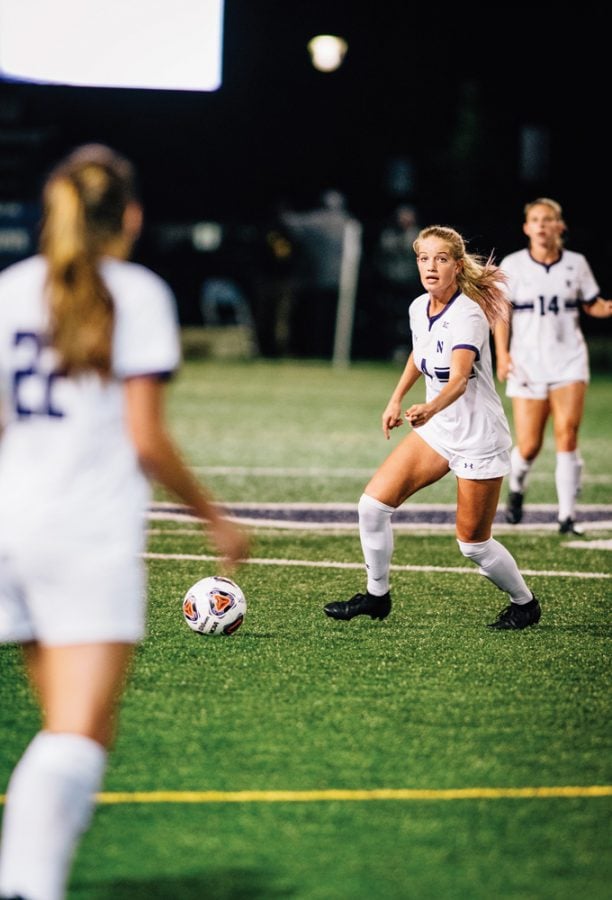 After five shots, six corner kicks and 110 minutes of play, Northwestern still couldn’t find the back of the net — and neither could Purdue.

Thursday’s contest at Martin Stadium ended in a 0-0 draw after double overtime, giving the Wildcats their third shutout of the year in their conference home-opener.

“They did an amazing job,” sophomore goalkeeper Mackenzie Wood said of the backline. “We really learned when to step in, (and) we connected better with our midfielders this game.”

Wood did her part on defense, too, picking up seven saves throughout the game. The first save came nearly two minutes into the game, when Purdue forward Leanna Rebimbas kicked the ball toward the upper center of the goal and Wood tipped it over the net.

With the 0-0 result, the Indiana native also secured the 11th shutout of her career, which places her in fifth for shutouts in Cats history.

“She did what we’ve seen her do in the past,” coach Michael Moynihan said. “She’s in a good place right now, playing strong, and we need that.”

The offense struggled in the first half, as they didn’t take a shot, but the second half was a different story. The Cats’ offense came to life when freshman outside back Danika Austin took the first shot for NU in the 47th minute, which missed wide right. Junior midfielder Regan Steigleder shot the ball too high a minute later.

Despite picking up four of NU’s five shots Thursday, Steigleder still wasn’t satisfied with her performance.

“I should be scoring, not just getting it near the goal,” the Iowa native said. “We definitely (played) better, and we should have capitalized more.”

Steigleder added that the Cats struggled to execute and finish their crosses up top, and they needed better “composure” in the middle of the field.

“There’s too much reaction to stuff and not enough initiating and thinking ahead,” Moynihan said. “Everyone has good, organized defenses, and you have to be out-thinking them and anticipating things if you want to make things happen.”

However, Moynihan said he thought the team played well in the final third of the game, something the Cats had been working on in practice.

Though she was “disappointed” with the result, Steigleder said she’s looking forward to Sunday’s match against Rutgers in Piscataway, N.J.

“We’ll look through film, regroup and see what we can do better,” Steigleder said. “Zero-zero is better than a loss, so we’ll take it.”