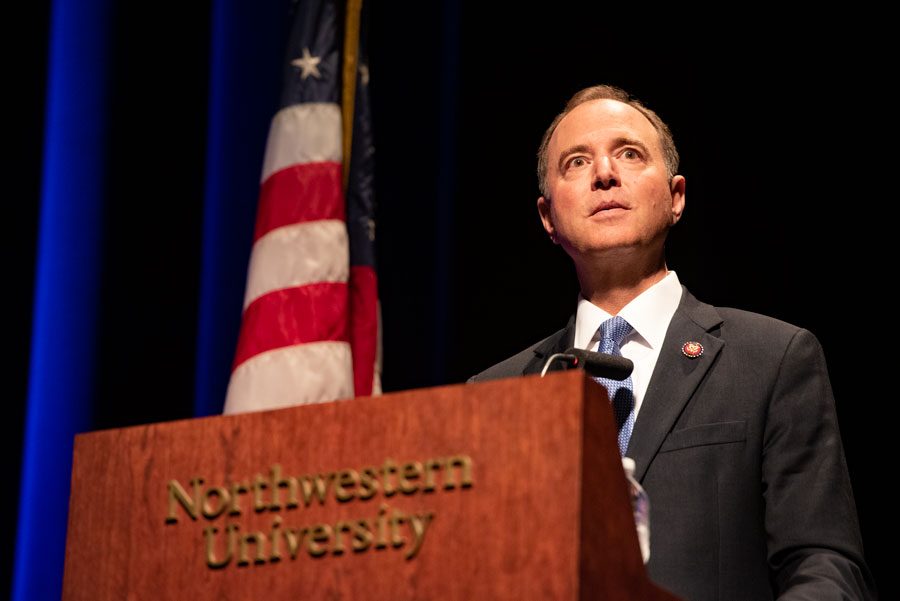 Chair of the House Intelligence Committee Adam Schiff speaks at the 30th annual Leopold Lecture in Cahn Auditorium. The 10-term congressman said Trump is merely a phenomenon of a global anti-democratic trend.

At a Thursday lecture, Chairman of the House Permanent Select Intelligence Committee Rep. Adam Schiff (D-Calif.) said President Donald Trump was not the catalyst of the right-wing movement across the United States and Europe, but only a branch of the phenomenon.

Schiff spoke to a sold-out crowd of around 900 people at the 30th annual Richard W. Leopold Lecture, “The Threat to Liberal Democracy at Home and Abroad,” hosted by the Weinberg College of Arts and Sciences, and focused on the Trump impeachment inquiry and his experience in the White House.

The 10-term congressman opened with humor, joking about how his daughter once called him “pencil neck.” However, he quickly pivoted to what his audience came to hear — his analysis of the wave of right-wing, anti-Democratic sentiment sweeping through the United States and Europe.

The chair of the House Permanent Select Committee cited instances of far-right mobilization in France, Brazil and Germany as evidence of this global gain of power for those who oppose liberal democracy.

Though the global movement Schiff described did not have origins in Trump’s 2016 presidential campaign, it did not keep him from discussing his areas of worry — particularly the integrity of the 2020 election.

Schiff pointed to states that still do not have paper trails when counting votes in elections. He spent time disputing the idea that state election security is “a local affair” and that the federal government should “butt out.”

“The fact so many polling places in so many key states and jurisdictions still don’t have a paper trail is negligence,” Schiff said. “If a swing jurisdiction or a swing state screws it up because they don’t maintain good security of their technology, they screw it up not just for themselves. They screw it up potentially for their state and, indeed, potentially for their country.”

The discussion then moved to other topics, including news media, Trump and the impeachment inquiry against him.

Before the event began, President Morton Schapiro told The Daily he was excited to have students and the community hear from Schiff about his work as a congressman.

“I hope they get inspired by his service,” Schapiro said. “Also, I hope they get some appreciation of Dick Leopold, who was a fantastic professor here for 45 years, a great scholar and a great teacher.”

The lecture is named after Richard Leopold, who was a history professor for over 40 years, most of them at Northwestern. Former students, friends and colleagues formed the Richard W. Leopold Lectureship, which has hosted various speakers in politics, foreign policy and academia.

The Q&A took a dive through lighter and heavier topics, from Schiff discussing his favorite nickname given to him by Trump to his GOP colleague’s reactions to the whistleblower.

Jeremy Lipsitz (Weinberg, ’15), said at the end of the lecture, he found the mix of seriousness and humor interesting.

“This is like a big deal,” Lipsitz said. “This isn’t just a guy who you just want to hear some insights from. This guy is involved, right now, with this whole process that’s affecting our entire nation and, by proxy, the world.”