Volleyball: Northwestern looks to get back on track against No. 17 Purdue, Indiana 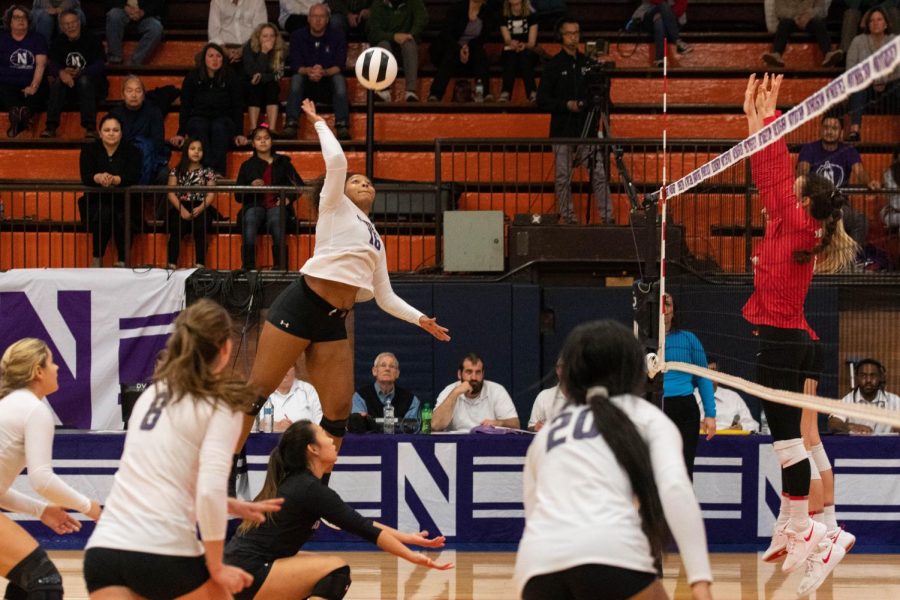 Nia Robinson hits the ball. The junior outside hitter is second on the team in points.

Northwestern has not had it easy this season.

Whether it’s the nine injuries that have ravaged the team’s lineup, the gauntlet of Big Ten powerhouse teams on their schedule or their own occasionally passive play, the Wildcats’ resilience and depth have been tested over the opening weeks of the season.

The Cats entered their two-game homestand against the nationally ranked Iowa and Nebraska squads last weekend, hoping to start off their Big Ten play strong. Instead, NU lost both games, falling in four sets to the Hawkeyes and in three to the Cornhuskers.

The lopsided final scores were deceiving, as Iowa and the Cats were neck-and-neck for most of their match, and NU played up to its competition against current No. 2 Nebraska. The latter performance gave coach Shane Davis cause for optimism heading forward.

“There was a lot of hesitation on our part as a volleyball team on Friday,” Davis said. “What you saw on Saturday was a team that wasn’t hesitant, that was going out and playing in the moment, being competitive on every touch and trusting themselves, trusting their teammates, and you saw a lot of selflessness out there against Nebraska. That’s the good that we’re carrying over for this upcoming weekend.”

Now 0-2 in Big Ten play, the Cats will head east for matches against the Boilermakers and the Hoosiers. Though neither team is of Nebraska’s caliber, NU will face stiff competition in each matchup. The Boilermakers are ranked No. 17 in the nation and will have their raucous home atmosphere, according to Davis. He added the unranked Hoosiers have an edge in experience over his squad.

Still, the Cats believe that if they can implement the attack mentality that kept them competitive against Nebraska, they can return to Evanston with an even conference record.

“We have an opportunity to beat a ranked team with Purdue, and we need that on our resume,” Davis said. “We haven’t beaten a ranked opponent yet this year, and that’s going to be more important as we go down the road.”

With key players returning to the mix in the coming weeks and a manageable slate of upcoming games allowing them an opportunity to get back on track, NU harbors high hopes for where it will be at the end of the regular season.

A sweep this weekend would be a major step in that direction.