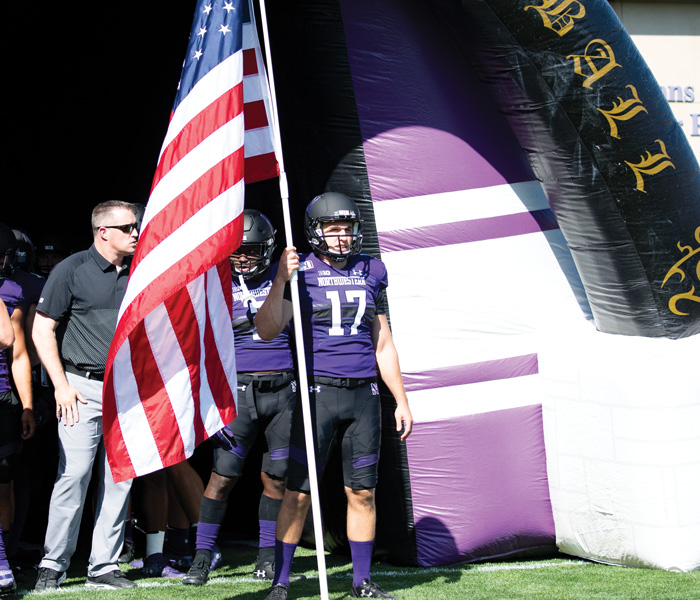 Dan Kubiuk prepares to lead Northwestern out of the tunnel before its home opener against UNLV. The sixth year senior has dealt with multiple catastrophic injuries and has played multiple sports in his career at NU.

Dan Kubiuk’s journey to Northwestern’s starting punting job is so long and unique, it’s probably best to just let him tell you.

“Came in, walked on to the football team as a kicker, after that freshman season I switched over to quarterback and then after my sophomore season I actually switched over to baseball for spring, came back to football, I was a quarterback for another year, then it was my redshirt junior year… just trying to think about, ‘How can I get out on the field?’ And we didn’t really have a backup punter at the time, so I thought, I punted in high school, might as well give it a shot.”

After Kubiuk became a punter, he served as Hunter Niswander’s backup for a year. Then, while preparing for the next season, he suffered a torn Achilles tendon in his kicking leg, the second time he’d torn that very tendon. So he sat out while Jake Collins took over punting duties, then came back for his sixth season and won the starting job this offseason.

It’s an unreal odyssey that leaves Kubiuk — who celebrated his 24th birthday earlier this week — as the oldest player on NU’s roster. As the Wildcats have struggled offensively this season, it’s meant more and more work for the Barrington native, who punted 10 times for 396 yards in Saturday’s loss at Wisconsin.

Kubiuk was a two-sport athlete in high school, starring as both a quarterback and a pitcher for Barrington High School. So when NU coach Spencer Allen gave him a chance to pitch during his sophomore year, he couldn’t say no.

“One of my lifelong dreams was to play college baseball,” he said. “I love football, I didn’t like being away from it but the opportunity came about, and I had to pursue it and give it one last shot because it was probably my last opportunity. So I’m very thankful for that opportunity. Pitched in a lot of cool stadiums, got to travel a lot, and it was just another incredible experience.”

Special teams coach Jeff Genyk remembers Kubiuk “having a no-hitter going against Ohio State,” something Kubiuk disputes. For the record, he pitched 5.2 innings against the Buckeyes — but gave up a home run in the third inning. So there was a no-hitter, at least at some point.

After his one season on the diamond, Kubiuk decided to head back to the gridiron. And more so than the alleged no-hitter, Genyk is impressed with how hard Kubiuk has worked to get to this point on the football field.

“Well, it’s just an amazing accomplishment,” Genyk said. “To be here six years and go through double Achilles surgeries and to be able to play at this level is really a feat for our athletic training staff and a feat for his determination, as far as his rehab is concerned.”

In addition to punting, Kubiuk serves as NU’s holder, so he’s had to build up chemistry with long snapper Tyler Gillikin and kicker Charlie Kuhbander. During practice, the specialists often spend long periods of time together while the offense and defense go through drills, so they have plenty of time to get on the same page.

Gillikin, who’s snapped for three punters in his three years as the Cats’ starter, said it’s comforting to have an athlete like Kubiuk back there in case something goes wrong. But chemistry is more important on a field goal attempt.

“I think we’ve developed chemistry, especially during camp,” he said. “That definitely does help, especially with the snap hold kick. That’s where the chemistry really needs to be, and I think we’ve done a really good job with that this year.”

For what it’s worth, Kubiuk is the only player left from the Trevor Siemian era. His college career will span six seasons and multiple sports, and he’ll be able to say he started games in both Haymarket Park and Camp Randall Stadium.

He also battled back from two catastrophic injuries, even going through a position switch as he continued to fight for playing time.

“Mentally it was tough,” he said. “The second one was actually a bit tougher. It was a long rehab process over the past two years. Emotionally, physically, mentally, each day was draining, but I missed being out here so much that looking ahead was what got me through to this point.”