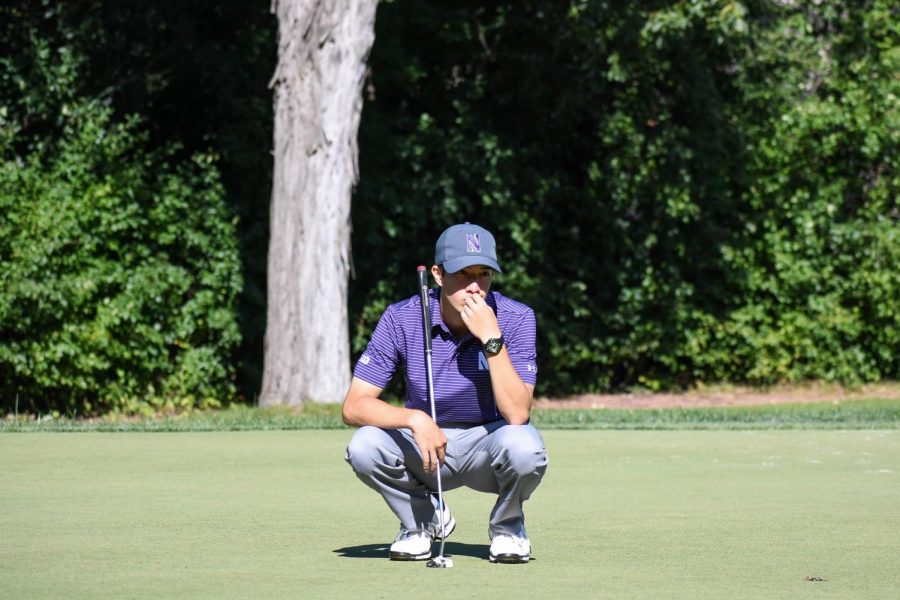 Sophomore Yannick Artigolle prepares to take a shot. The sophomore finished with a 9-over in his lone tournament of the season.

Northwestern will venture north this weekend, treading familiar ground as it attempts to capture a second straight first-place finish at the Marquette Intercollegiate tournament at Erin Hills Golf Course in Erin, Wisconsin.

The Wildcats bring an experienced squad to the 12-team competition, with senior Everton Hawkins and junior Eric McIntosh returning as key upperclassman contributors from 2018’s two-stroke win. Both are coming off strong finishes at NU’s previous tournament at Olympia Fields, having each shot an even-par 70 in the final round.

“Both played on the team that won the tournament there last year,” coach David Inglis said. “(We have) a lot of good notes from a lot of tournaments before.”

One golfer from previous tournaments who won’t be present is the recently graduated Ryan Lumsden, who made his debut Thursday on the European Tour, firing a 1-under in the first round of the Spanish Open.

Last October, Lumsden’s individual score of 8-under, was good for first in the 70-player field.

Referring to Lumsden and Cats alum Dylan Wu, who recently qualified for the PGA Tour’s Shriners Hospitals for Children Open this month, Inglis said it was “kind of a big week” for NU.

Despite the loss of Lumsden, Inglis is confident McIntosh and Hawkins can help guide another contender, buttressed by a strong freshman class.

James Imai, John Driscoll III and Matthew Camel are the three newcomers, and all have contributed early, with Imai and Driscoll III ranking among the top five scorers on the team.

“James was rock solid,” Inglis said. “(John Driscoll III) had a good final round. Both played very well in our recent qualifier… I think we have a lot of good strength and depth.”

The Marquette Intercollegiate marks NU’s second-straight tournament at a U.S. Open course, following an 11th place finish at Olympia Fields, where the tournament took place in 2003. Erin Hills was the site of Brooks Koepka’s first major championship win in 2017.

“Anytime you play in a venue like that, it’s really special,” Inglis said.

Along with the Cats, Ball State, Georgia State, Indiana, Liberty, Marquette, Miami of Ohio, Purdue, South Florida, UC Davis, UCLA, and Wisconsin comprise the field for the tournament. NU is 4-2 head-to-head against this collection of teams this season. The course will have a yardage of 7515, about 226 yards shorter than the Open two years ago, and par will be 72.

Weather is also expected to be a factor, with heavy thunderstorms in the forecast for Saturday night and a chance of rain Monday as well. Inglis, however, does not expect the storms to affect the flow of the tournament.

“The course may play soft,” he said. “It’s about who can adapt and handle the best.”