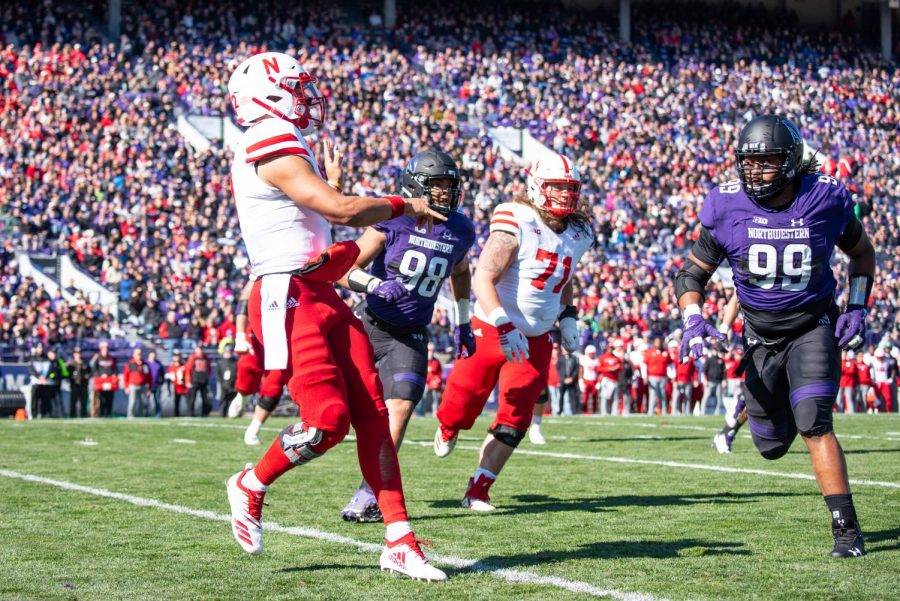 Adrian Martinez is hurried out of the pocket. The sophomore gunslinger is one of the top quarterbacks in the Big Ten.

While Fitzgerald said he was ecstatic to have the then-freshman in the rearview mirror for 2018, he was not excited to have to face him again over the next three years. Twelve months later, Fitzgerald still holds Martinez in high esteem.

“(The Nebraska offense) starts obviously with Adrian,” Fitzgerald said Monday. “He took the conference by storm last year, and he’s just continued on this year.”

But Martinez is coming off arguably the worst performance of his career Saturday. With College Gameday in town for Nebraska’s contest versus No. 5 Ohio State, Martinez was 8-for-17 for 47 yards with three interceptions. He did have 81 yards on the ground, but taking out one 56-yard scamper, he averaged only 1.79 yards per carry.

It ended in a 48-7 beatdown on national television.

Adrian Martinez faces a man-free defense and is sacked by the defensive spy.

After losing to Wisconsin early in the afternoon, the Wildcats arrived back in Evanston during the second quarter of the game in Lincoln, Nebraska. Once back on campus, senior defensive end Joe Gaziano watched the rest of the game, paying attention to the Buckeyes’ game plan.

Gaziano said Ohio State played some man-free defense — when a single safety covers the backside of the defense while the receivers are defended man-to-man — and doing so allowed other players to spy the quarterback. That coverage made it tough for Martinez to scramble, Gaziano said, and pressure from the edge forced Martinez to quickly make tough decisions.

Adrian Martinez against a man-free defense.

While the Nebraska offense was anemic for most of the Ohio State game, one drive in the game set the Cornhuskers’ fans into a frenzy. On the third possession of the game, Martinez lined up under center, and Nebraska threw it back to the 1990s with some I-based option offense.

Dedrick Mills rushed for runs of 10 and 12 yards, and Martinez bolted for eight on one play, as they drove the ball into Buckeyes territory. Ohio State called a timeout to try to adjust and halt momentum. On the first play out of the timeout, Martinez lined up in shotgun and threw a pass that was tipped by his receiver and intercepted.

Adrian Martinez carries the ball on a reverse pivot keeper out of the I formation.

Down three possessions when they got the ball back, Nebraska had to move away from the I formation and go to a pass-based attack to get back in the game. But Nebraska coach Scott Frost — who led Nebraska to the 1997 National Championship running the I-based option — said the formation’s return was not a one-hit wonder.

“We’ve been working on it for a long time. Some of the things we’re running fit the defense that they gave us,” Frost said. “We’ll see more of that stuff going forward. I want that to be a piece of what we’re doing.”

In last year’s game, Martinez was 25 of 35 for 251 passing yards but only had 37 yards on the ground and threw two picks. One of those picks came in overtime, when safety JR Pace picked off Martinez’s pass in the endzone, setting up Drew Luckenbaugh’s game-winning field goal.

Remembering the loss, Martinez said he has grown since that game.

“I wouldn’t necessarily call it payback, but I am definitely aware of what occurred last year, and I think that was last year’s team’s problem,” Martinez said. “We are looking forward for another opportunity to get back on the field this week.”

All gifs are from WatchESPN via Giphy.