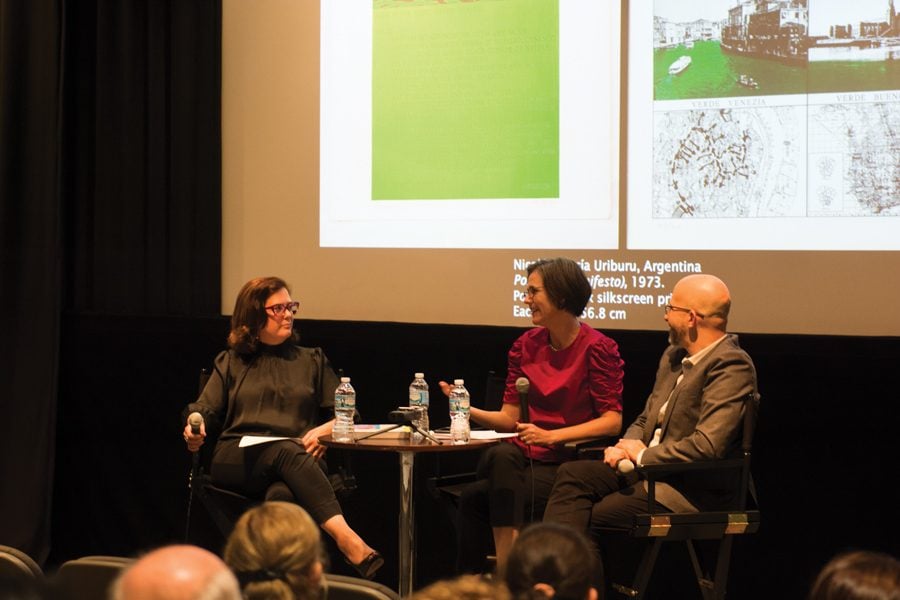 Pointing to the title of “Pop América,” the exhibition’s curator Esther Gabara reveals a message behind the accent over the letter ‘e’.

“It declares independence from the United States’ long presumption of ownership of the world, as well from the troubled history of the idea of Latin America,” said Gabara.

Gabara spoke as part of the event “Contesting Freedom: Pop América,” on Wednesday at the Block Museum. The panel discussed the politics of pop art in relation to the ongoing museum exhibition “Pop América,” which highlights the contributions of Latin American artists to the art movement. Gabara was joined by Weinberg professor Alejandra Uslenghi and Daniel Quiles, assistant professor at the School of the Art Institute of Chicago. Corinne Granof, the academic curator at the Block, moderated the conversation.

“Pop América” won the 2017’s Sotheby’s Prize, an award given to exhibitions that explore overlooked areas in art history. Granof said the exhibition is the first to celebrate the contributions of Latin American and Latinx artists in the pop art movement. Featuring the works of artists from countries such as Brazil, Chile, Puerto Rico and the U.S., Granof said the art show hopes to represent the Americas as a single continent.

According to Gabara, “Pop América” focuses on work created from 1965 to 1975 because of the period’s historical significance. Gabara said this decade was defined by political turmoil and the spread of U.S culture across the rest of the Americas, which influenced the art creation.

“A lot of Latin American countries experienced dictatorship, revolutions and conflicts,” said Weinberg junior Fiona Asokacitta, a student docent at the Block. “By analyzing these artworks, you can see the struggles behind the identities bleeding through it.”

Asokacitta said she can relate to the themes of American imperialist dominance in the exhibition’s artwork due to her own background growing up in Indonesia. To reach a holistic understanding of mainstream culture, she said it is important to promote marginalized art and challenge dominant narratives.

“Even some works adopted the techniques of pop art, they say something new about it,” Asokacitta said. “It’s like a push back, like a satirical acknowledgment of the imperialistic homogeny and the influence of media, advertising, mass production in our lives.”

Even though pop art is sometimes considered to be apolitical, Asokacitta added, “Pop América” challenges and complicates this idea through the curation of its pieces. The exhibition juxtaposes different works with multiple levels of engagement, encouraging the audience to explore the connection between the pieces.

Communication graduate student Evelyn Kreutzer, a fellow at the Block who assisted with “Pop América,” said she wants the audience to think about the political attitude behind the pieces that are being juxtaposed.

“It is important to find out that pop art isn’t as surface-oriented as it sometimes sounds to be,” said Kreutzer. “There is so much history to it, and it all comes out through all the brilliant curatorial decisions they have made.”