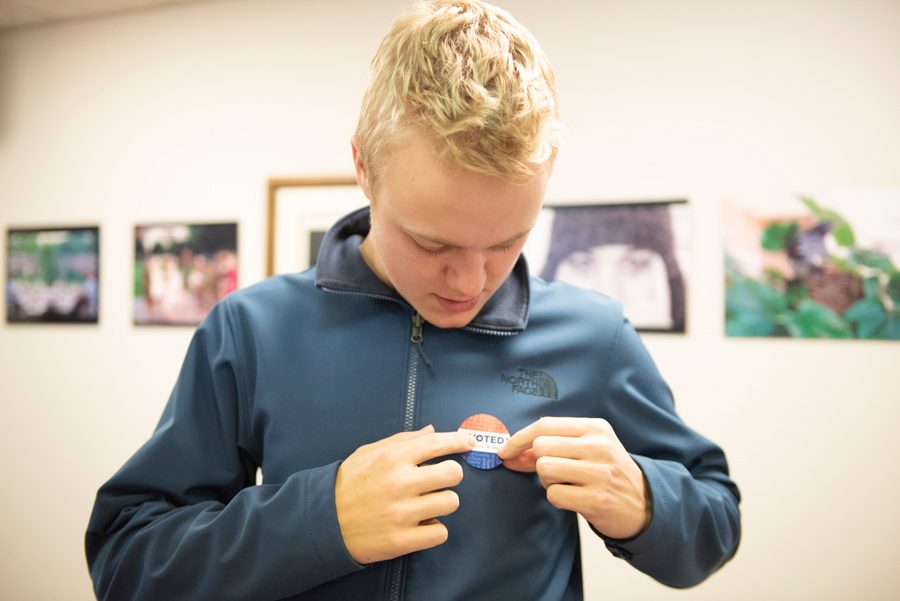 A young voter puts on an election day sticker. Evanston political groups discussed major issues they will focus on for the 2020 election season.

With the 2020 Democratic Primary debates stirring discussion around issues facing America, Evanston residents weighed in on what they believe are the most important issues to them, both nationally and locally, heading into election day next year.

According to the Evanston Township GOP, the Democratic Party of Evanston and Indivisible Evanston, the most consequential topics include healthcare, climate change, taxes and the reelection or defeat of President Donald Trump in the 2020 election.

The DPOE, Indivisible Evanston and the Evanston GOP all acknowledged that Evanston is overwhelmingly Democratic — typically 80 percent or more of the vote goes towards the Democratic candidate in an election race. Therefore, each group stressed that the issues they will focus on this election season are national issues that go beyond Evanston, including healthcare or electing candidates in more competitive districts.

Blair Garber, the committeeman for the relatively small Evanston GOP, talked about how the organization has had a keen focus on state and local taxes going into 2020.

Garber and the Evanston GOP were especially concerned about the Illinois Graduated Income Tax Amendment — a progressive income tax amendment — which will be on the 2020 Illinois ballot as a constitutional amendment.

The amendment is a tax policy proposed by Illinois governor J.B. Pritzker that would tax Illinois residents’ income at 7.99 percent for citizens earning more than $750,000 annually.

“It’s going to basically blow the lid off Illinois,” Garber said. “People are going to be leaving (Evanston) in droves. It’s basically a doomsday scenario.”

But he acknowledged the Evanston’s GOP limited power in pushing their agenda.

“You know we live in a town that is basically a one-party town,” Garber said. “It’s not even close. There’s a fact that Evanston is naturally Democratic.”

On the Democratic side, the DPOE has been focused mainly on defeating Republican candidates up and down the ticket, especially in Wisconsin and other Midwest states that voted for President Trump in 2016.

To accomplish this the DPOE took up a project titled MAP: the Midwest Alliance of Progressives.

“What we did was we reached out to other little tiny Democratic organizations in Wisconsin and Michigan,” said DPOE board president Michelle Jordan. “We all got together and had a giant summit and we decided on which races we thought could win.”

In addition, Jordan highlighted climate change and healthcare as issues that have been widely discussed within their organization.

“I know that healthcare is going to be something that everyone is going to be discussing in the caucuses and as part of the convention,” Jordan said. “We’re going to see a lot of young people pushing the environmental issues — climate change.”

Similarly to the DPOE, Indivisible Evanston’s main goal has been to resist Trump’s agenda by backing national candidates in Illinois and Wisconsin who promote a more progressive agenda.

Linda Tate (Weinberg ‘76), who co-leads the chapter of 650 Evanston residents, also said that like the DPOE, healthcare, climate change and election integrity were the three most important issues, according to a poll of their members. But she also said how hard it is to narrow the 2020 election to a few important issues because there is a wide array of problems that face America.

“It’s really hard to limit (the issues),” Tate said. “But we just find that if we resist the conservative agenda that we’re falling out on the right side.”