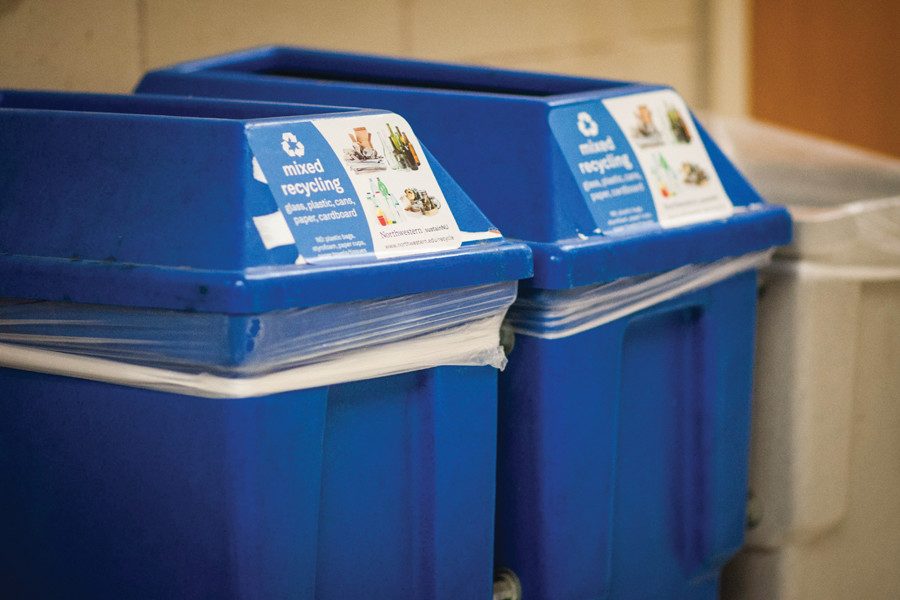 Recycling bins in Technological Institute. Evanston recently ended its “nope” educational campaign that reminded residents what not to recycle.

If you hear people say “nope” around Evanston, they might not be referring to Lil Nas X’s Twitter account, the popular Parks and Recreation character or a funky way to say no. They’re probably talking about recycling.

During the month of September, Evanston ran a month-long “Nope” educational campaign, designed to inform residents about non-recyclable products. The campaign highlighted products that often end up in recycling bins when they shouldn’t be, including paper towels, batteries and any items containing food and liquid, according to a news release.

The city focused on one message in particular, said Alyson Wright, Evanston’s sustainable business fellow. City staff wanted to emphasize that plastic bags are not allowed in recycling carts.

“I had the opportunity to visit a materials recovery facility, where they sort through all the recycling,” Wright said. “There are people at the facilities that are hand-sorting, so they can’t really open up the bag because it’s really not safe. There could be anything in that bag. So they’re actually having to toss the bag, and it will go directly into the landfill.”

Wright also said the plastic bags get caught in the gears of the machinery on the conveyor belt of recycled materials, forcing workers to stop sorting multiple times a day to clear out the plastic.

The campaign included three short animated videos on plastic bags, foods and liquids and wish cycling, which describes the phenomenon of people throwing products into the recycling bin they hope can be recycled.

The city wrapped several recycling trucks with an advertisement about plastic bags and spread graphics on social media. Evanston also conducted a survey on Facebook and SurveyMonkey to quiz residents on recyclable products, receiving about 850 responses.

“We also just printed stickers,” Wright said. “These stickers will be put on residents’ carts when there are plastic bags in there, or they’re available at the Civic Center for residents to pick up and put them on their cart — or maybe they live in a shared apartment and they’re seeing a lot of plastic bags, they could put them on that just to kind of get the message out to their neighbors.”

One common recycling misconception addressed by the “Nope” campaign is that people can recycle food-soiled napkins or pizza boxes. But instead of throwing away these items and other food scraps, Erlene Howard, the founder and owner of Collective Resource, said residents can compost these items. And, residents can check the packaging of their products to see if other common non-recyclable items such as coffee cups are instead compostable.

Evanston contracted Collective Resource back in 2017 to address the city’s composting needs, and the company offers residents food scrap pickup from their homes. The company then brings the scraps to the Harbor View Compost Facility.

“The material gets ground up with yard waste and then laid out in these great big rows… to cure naturally, so the carbon stays in the material,” Howard said. “It’s a carbon-negative process to compost, which we love.”

Overall, the campaign plays into the larger city goal of zero waste by 2050 laid out in the Climate Action and Resilience Plan. The plan calls for other, larger policies to be implemented, such as requiring all properties to recycle and phasing out single-use plastics by 2025.

“We’re hoping this campaign can be one step closer toward educating the public and getting them to understand the do’s and don’ts of recycling,” Wright said.

This story has been updated to clarify that residents can check if some non-recyclable items are compostable.