Men’s Soccer: The recovery and the emergence of Ugo Achara Jr. 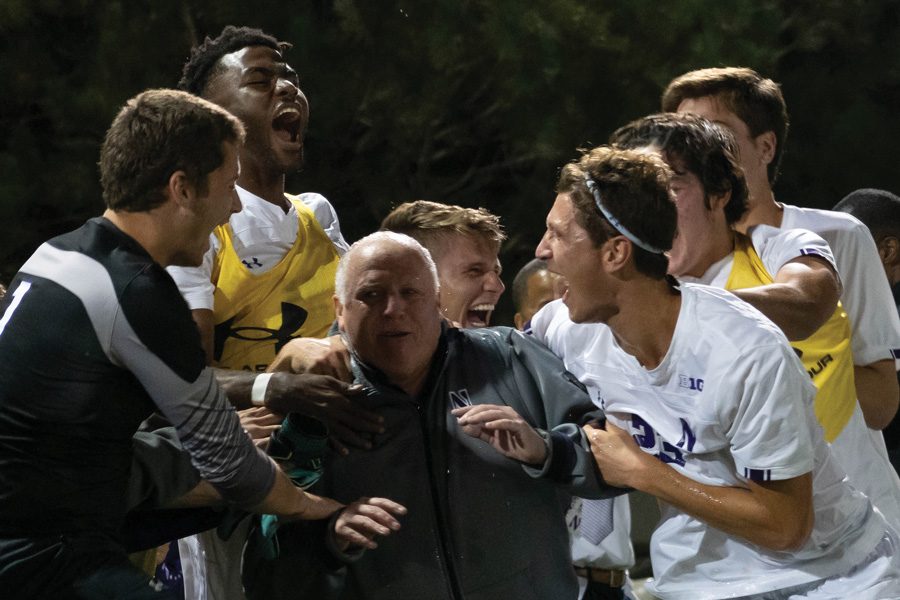 Despite not being at full strength and only scoring one goal at Northwestern coming into Tuesday, Ugo Achara Jr. woke up Tuesday morning and called his shot.

He told his roommate, freshman defender Logan Weaver, that he would score that night against No. 5 Indiana. And after he did, he’d backflip.

That all came true in the Wildcats’ 3-1 loss Tuesday. Achara Jr. scored his second career goal and then did his first flip on the field since the semifinals of his high school state tournament. Heading into Friday’s game against Michigan (3-2-3, 0-0-2 Big Ten), he’s produced some of the team’s most dangerous chances recently and added a new element to the NU (5-4-1, 1-1-1) attack.

“He’s a special player,” senior midfielder Matt Morderwell said. “He’s going to be the future of this program when I’m done.”

Achara Jr.’s two goals have shown his strength and athleticism, two traits hard to find elsewhere on the roster. His goal Tuesday sailed into the top right corner of the net on a shot from over 20 yards away, and he also scored a leaping header against Illinois-Chicago on September 24.

But he’s missed a number of shots as well, including one from close range against the Hoosiers that could have tied the score at two. Achara transitioned to attack late in his high school career after a teammate was injured in the preseason, and coach Tim Lenahan said Achara needs more reps to become a consistent, reliable finisher.

“There are certain guys that things slow down for them, and everything moves in slow motion when they get in front of the box,” Lenahan said. “I don’t think he’s that guy, but because of his athleticism and his work, he’s going to get a lot of chances and some of them are going to go in.”

Lenahan said Achara Jr.’s impressive instincts on-ball have helped him overcome his lack of experience at striker. He’s entered the rotation at attack early in his career despite not being “100 percent” according to Lenahan, who didn’t disclose Achara Jr.’s injury.

Because he’s not fully healthy, Achara Jr. said he’s second guessing himself more often and is struggling more than he expected adjusting to college soccer.

“When you get hurt, especially at this level, you have to manage big expectations for yourself,” he said. “You want to come out and contribute as soon as possible and then you get hurt, it takes a toll on you physically and mentally. Especially the mental part.”

But over the last two weeks, Achara Jr. hasn’t played like someone who’s had trouble playing more aggressively. He said he’s done a lot of talking with teammates, coaches and the team psychologist and started doing breathing exercises to feel more comfortable on the field.

Achara Jr.’s minutes have increased as he’s come closer to returning to his old self. He said he’s stressed with the people he speaks with regularly that it won’t be long until he grows into the scorer he expects himself to be.