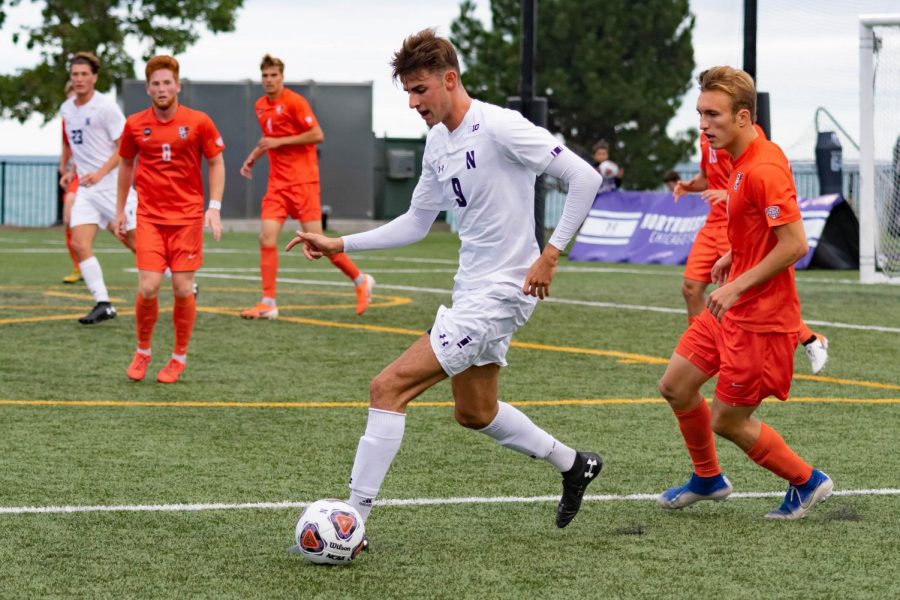 Jose Del Valle dribbles the ball. The sophomore is third on the team in scoring this season.

With less than six minutes remaining in the first half, Northwestern freshman forward Ugo Achara Jr. received a pass from senior midfielder Sean Lynch, gave the ball a soft touch and fired the ball from right outside of the box.

The ball sailed off of his foot and curved into the top right corner of the net, right over the outstretched hand of Indiana goalie Roman Celentano. The Cats still lost to the No. 8 Hoosiers 3-1, but with the goal, Achara Jr. scored in two of the Wildcats’ last three games. NU (5-4-1, 1-1-1 Big Ten) has relied on him and other younger talent for the beginning part of the season.

“He’s got a lot of confidence,” coach Tim Lenahan said. “Two goals in two weeks here on Tuesday… it was a great finish.”

Achara Jr. switched to striker late in his high school career, but he’s been extremely successful in his short time at the college level. While he’s made some great plays, Lenahan also said that he still has a lot of room to improve, emphasizing that he needs to continue to practice finishing if he wants to get better.

Last season, despite Indiana’s talent, the Cats played the Hoosiers, (6-1-2, 2-0) better than any other Big Ten opponent that they faced. In two games, including one in the Big Ten Tournament, NU fell to Indiana as a result of two last-minute goals.

But in Tuesday’s matchup, the Cats seemed to be more balanced on offense and played an evenly-matched game, despite the ultimate result. After Indiana outshot NU 49-6 last season, the Cats took nine shots to the Hoosiers’ 11 on Tuesday.

“This was an important learning experience for them because this is the first time we played Indiana, what I felt, as being close to being equals,” Lenahan said of his underclassmen. “You have to learn how to play against good teams that know how to win… That’s what Indiana did tonight.”

With the graduation of midfielder Camden Buescher last season, the question for Northwestern was who will pick up the offensive production. Fortunately for Lenahan and staff, the Wildcats have relied on other underclassmen as well.

Aside from Achara Jr., sophomore forwards Bardia Kimiavi and Jose Del Valle have stepped up, as they are two of the top point scorers.

While upperclassmen are contributing as well, it’s clear that the team’s sophomores have matured a lot from last season, and this year’s freshmen are showing flashes of potential — but it was the Hoosiers’ freshmen who came through on Tuesday.

Two of Indiana’s three goals were scored by freshman forwards Maouloune Goumballe and Aidan Morris, who were highly-touted recruits themselves. The Cats’ freshman played well, but as a team, Lenahan said the team didn’t play to its potential for a full 90 minutes.

“Tonight, we tried to go toe-to-toe, and, for a while, we did what we needed to do to generate chances,” Lenahan said. “You can’t make the mistakes that we made… We lacked a little maturity in the second half to take this one.