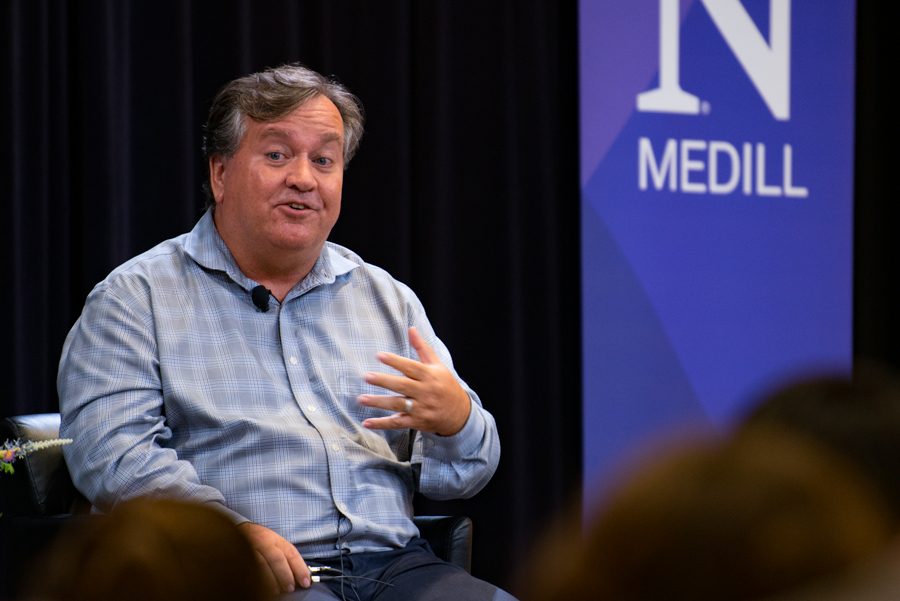 At a Wednesday Q&A, David Barstow (Medill ’86), a four-time Pulitzer Prize-winning investigative journalist, defended the use of “fighting words” in the New York Times’ coverage of Trump’s financial history.

Prof. Debbie Cenziper moderated the the Q&A session titled “The State of Investigative Journalism.” With a crowd of 150, Barstow discussed his career and shared advice with aspiring investigative journalists.

“It’s really great to be home at Medill,” Barstow told The Daily. “It’s amazing to see this astonishing new generation of really smart, talented people taking up the banner of reporting.”

Barstow recently completed a 20-year career at The Times. When he was a full-time reporter, his investigative work uncovered corruption in both public and private spheres. He became the first person to earn four Pulitzer Prizes across the reporting categories with an April team project that examined President Donald Trump’s questionable financial history.

In the story, published in October 2018, Barstow and his team members opened with a description of Trump’s “dubious tax schemes” and “outright fraud.” Their language prompted accusations of defamation from the White House.

“There’s a lot of thought that goes into whether words like that are actually substantiated,” Barstow said. “But when they are, by God, you want to tell the truth.”

He said the article underwent a thorough review process prior to its publication, following a 100,000-document trail of proof.

The Q&A focused on the nation’s perception of journalism. Barstow said recent shifts in the government’s attitude toward journalism have had significant effects on reporters.

“It’s a really brutal business to go into right now,” he said at the event. “Today, it’s a much starker contest between the world of truth and the kingdom of lies. There’s a greater willingness for political leaders and business leaders to just spout utter nonsense.”

Cenziper, who moderated the conversation and serves as an investigative reporter for The Washington Post, said she felt similarly to Barstow about shifts in the journalism landscape.

“The media industry is changing every day, and has changed pretty dramatically in recent years,” she said. “There’s no better journalist in the country to talk about the changing state of investigative reporting than David Barstow.”

Though she’s unsure if she wants to pursue a career in journalism, she said Barstow’s passion and persistence in his investigations inspired her.

“The most important things that are exposed in our society are from investigative journalists,” Kadoura said.

Barstow earned his first Pulitzer Prize in 2004, examining insufficient safety standards in American workplaces. His other award-winning projects include a 2009 article about schemes within the Pentagon to further the Iraq War and a 2013 exposé on Walmart’s use of bribery with Mexican officials.

Ultimately, Barstow said he hopes young journalists understand that anyone can be a great investigative reporter.

“All you really need in the end is two basic ingredients,” Barstow said. “You need abnormal curiosity, and you need relentless persistence. If you have those two things, you can do really great journalism. And if you don’t, no number of journalism classes will get you there.”