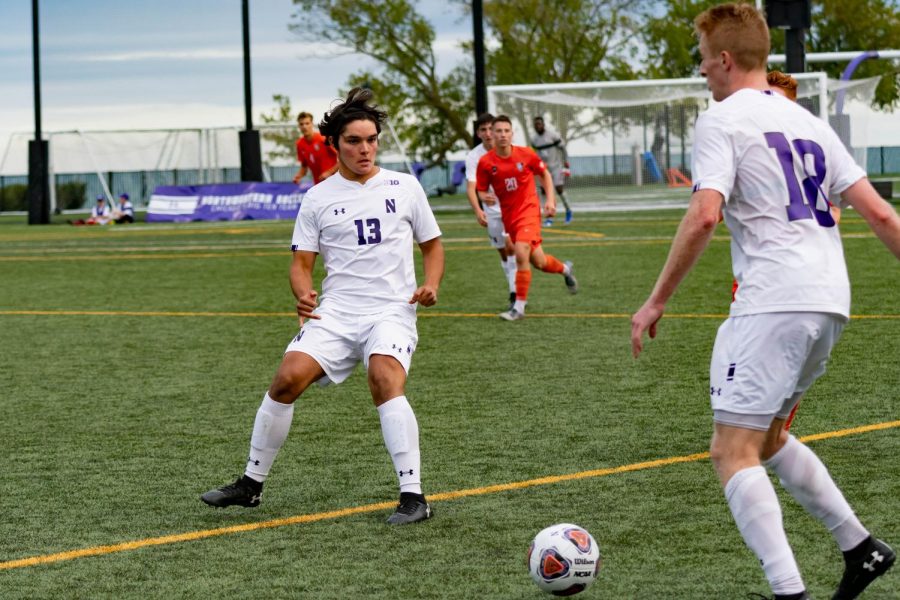 Sean Lynch receives the ball. The senior midfielder assisted on the Cats’ lone goal on Tuesday.

If coach Tim Lenahan could do it over again, he said he’d probably choose to play more conservatively against No. 8 Indiana, the team that leads the Big Ten in goals per game.

After losing in overtime to the Hoosiers in last year’s Big Ten Tournament, Lenahan played his midfielders up the field against the team that’s made 32 consecutive NCAA Tournaments.

But the Wildcats played a double-overtime game against Ohio State on Saturday, which, Lenahan said, could’ve contributed to NU’s midfielders being tired down the stretch.

“We weren’t quite mature enough as a team,” Lenahan said. “We’ve been a team that knows how to compete, hang on and fight and scrap and maybe hope for a chance. Tonight we tried to go toe-to-toe, and for a while, we did what we needed to do to generate chances.”

The Cats’ defenders kept them in the game in the first half, blocking over a dozen shots heading right for them. Senior midfielder Matt Moderwell said those stops hurt but rallied the team to match Indiana’s intensity.

But then two of those deflections found their way into the net, bouncing off an NU defender and into the goal.

Indiana forward Maouloune Goumballe scored the first goal of the game in the 37th minute, sliding in the box to poke the ball through three NU defenders. The ball tipped off junior defender Garrett Opperman’s leg and crawled into the net to escape freshman midfielder Logan Weaver’s attempt at a kick save.

“We just can’t be messing around with the ball in the box,” Moderwell said. “Indiana is a team that can finish – they’re leading the Big Ten in shots. That’s something that we knew, and we should have done a better job getting the ball out of there.”

The Cats evened the score three minutes later as freshman forward Ugo Achara Jr. sent a one-timer from 20 yards away into the top right corner of the goal.

But early in the second half, Indiana had another fortunate bounce.

The Hoosiers’ second goal was an own-goal for the Cats. In the 58th minute, Indiana forward Aidan Morris took a shot from ten yards away that collided with Opperman’s hip and didn’t lose momentum as it headed for the opposite side of the net. Opperman was inches from bringing the ball to a complete stop with his body, but, after the deflection, junior goalkeeper Miha Miskovic didn’t have a chance to convert the save.

Morris added to the lead with an uncontested goal in the 66th minute, as two NU defenders stopped playing to look for a foul call, leaving Morris unchecked, according to Lenahan. The Hoosiers controlled possession for the majority of the game after that, preventing a comeback.

Lenahan said moments like the Hoosiers’ final goal show the difference between the eight-time NCAA Champion Hoosiers and the untested Cats roster.

“This was a good learning experience because you have to learn how to play not just good teams, but good teams that know how to win,” he said. “That’s what Indiana did tonight. They found a way to win.”