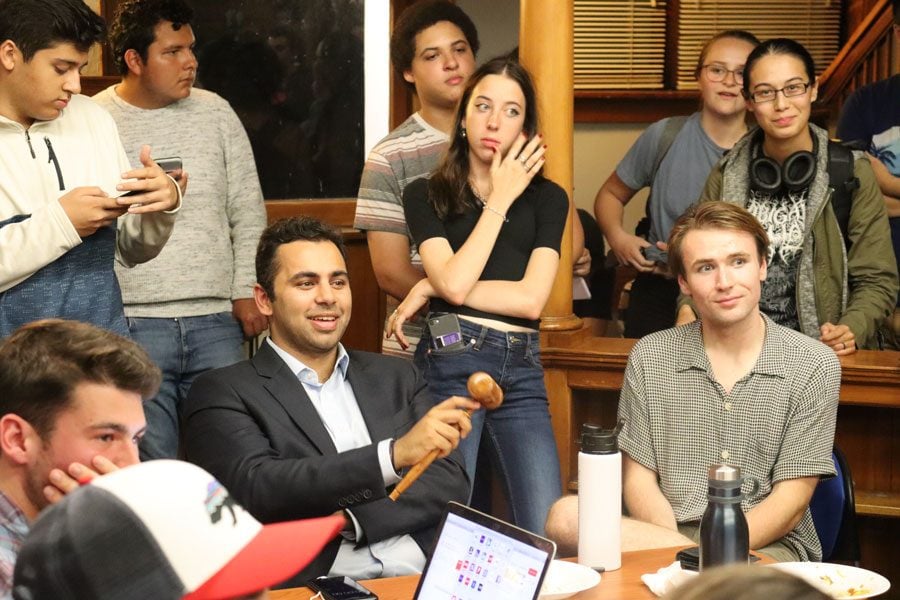 Northwestern Political Union Co-President Jahan Sahni raises his gavel during the debate. The Political Union voted for a mock resolution in support of the decriminalization of illegal immigration.

At their first debate of the year, Northwestern Political Union voted for a mock resolution in support of the decriminalization of illegal immigration.

As a crowd of around 60 packed inside the Buffet Institute for Global Affairs on Monday night, the group ultimately reached the same conclusion former secretary of the Department of Housing and Urban Development Julián Castro did this summer, when he started a discussion among Democratic Presidential contenders by voicing support for repealing Section 1325 of the U.S. code. That section allows people who enter the U.S. without proper documentation to be criminally prosecuted.

After the group’s first meeting of the new academic year, co-president and moderator Jahan Sahni said participants like to discuss topics currently in the national discourse.

“We wanted to do something that was quite accessible to the majority of the Northwestern population,” the Weinberg senior said. “Also, considering the fact that a lot of the people attending today might be first-timers, especially first years.”

After Sahni opened the event by reading Section 1325, Bienen junior Sachin Shukla reminded the group that the avowed white supremacist Sen. Coleman Blease constructed the statute, adopted in 1929. The statute aimed to force Mexican immigrants into the abuse of the federal government, Shukla said.

He added that to deal with the growing number of prosecutions, President George W. Bush began Operation Streamline in 2005, processing large groups of immigrants in group hearings.

“So you can throw due process out the window,” he said.

Recalling Blease, Shukla cited a statistic that found 92 percent of all immigrants imprisoned for illegal crossings come from Mexico and Central America.

“Section 1325 is about sending immigrants into needless abuse, gross incompetence, unwittingly aiding white supremacy in the process,” Shukla said. “We don’t need to do this.”

In his opening statement, McCormick senior Ian Odland argued that attitudes, rather than rules and policy, are the real problem.

Odland said Section 1325 does not legalize the Trump administration’s family separation policy, nor does it legalize criminal prosecution of undocumented immigrants.

“It has been the decision of the Trump, Obama and Bush administrations to prioritize criminal prosecution, instead of informal deportations,” Odland said. “It has been the attitudes of Donald Trump and Stephen Miller that resulted in child separations and violations of due process. It has been the prejudices of law enforcement officials that have led to abuses of human rights and the use of excessive force.”

Rather than repeal the statute, Odland said people should elect a president who will deprioritize criminal prosecution of undocumented immigrants, as had been the case before the 21st century.

He also expressed concern over the political pushback Democrats might face if they adopt a stance against the statute.

“Supporting the decriminalization of illegal immigration, and repeal of sections 1325 and 1326, will only inflame anti-immigrant attitudes and rehotiric, fueling human rights abuses,” Odland said, “and will contribute to the reelection of President Trump.”

When some argued that decriminalizing illegal border crossings would incentivize immigrants to forego the legal process, another student responded that the fact that undocumented immigrants do not have access to various government benefits would be incentive enough to go through the legal ports of entry.

Northwestern Political Union aims to foster discourse on topics where there is political tension, Sahni said.

With “echo chambers” rampant, he said the respectful space the group fosters allows people to be exposed to a greater variety of opinions that will force them to think critically about their own ideas.

A previous version of this article included an incorrect title for Julián Castro. Castro is the former secretary of the Department of Housing and Urban Development. The Daily regrets the error.