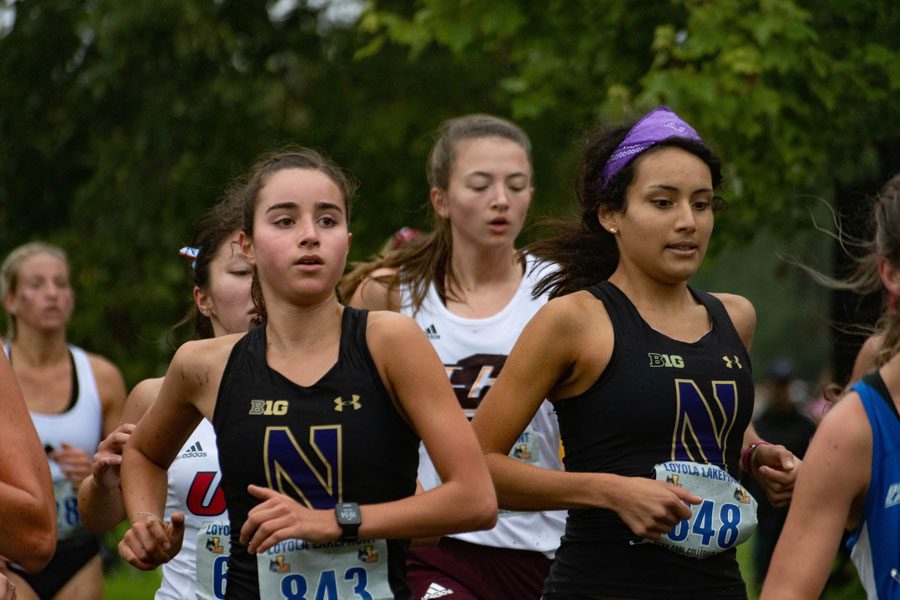 Kayla Byrne (left) runs in the Loyola Lakefront Invite. The freshman finished the 5K with a time of 19:14.03.

Ahead of Saturday’s Buckeye Preview and Loyola Lakefront Invite, coach Jill Miller told the Northwestern runners to be present during the race and find their teammates throughout the course.

After the Wildcats finished in the bottom half of both meets, Miller said she didn’t think the Wildcats lived up to her goal.

“It was a rough weekend,” Miller said. “There’s a lot of growth that we need to do as a team both in and out of practice and during competition.”

Michigan came out on top at the Buckeye Preview in Columbus, and Wolverine freshman Ericka VanderLende, took first in the 6K overall. Her winning time was 20:17.9 — roughly 5:26 minutes per mile.

Sophomore Rachel McCardell, NU’s top finisher, crossed the line a minute and a half later, taking 31st place at 21:54.1.

Though McCardell may not have been satisfied with her result, she “moved through the field well,” Miller said.

Senior Sarah Nicholson finished next for the Cats — with a time of 22:52.6 — but only after she passed out with 40 meters left.

Nicholson was running “a great race” until then, Miller said, and the senior had to get up and finish the course after she blacked out.

“She had a really, really tough effort out there,” Miller added. “She just hit the wall and mistimed the finish.”

Things didn’t go much better in Chicago at the Loyola Lakefront Invite.

Junior Amanda Davis led the Cats with a time of 19:05.58, and freshman Kayla Byrne clocked in moments later at 19:14.03. Even though only 31 seconds separated Davis from the last scoring NU runner — freshman Elizabeth Bulat — the Cats still ended the meet second to last, scoring 14th of 18 with 374 points.

NU now has a three-week break from racing, and Miller said the biggest thing she wants to focus on until then is consistency.

“The results — they are what they are,” she said. “Hopefully we can move out of them by the end of the season, but honestly, (we’re) looking toward the future to have a better direction on the program.”