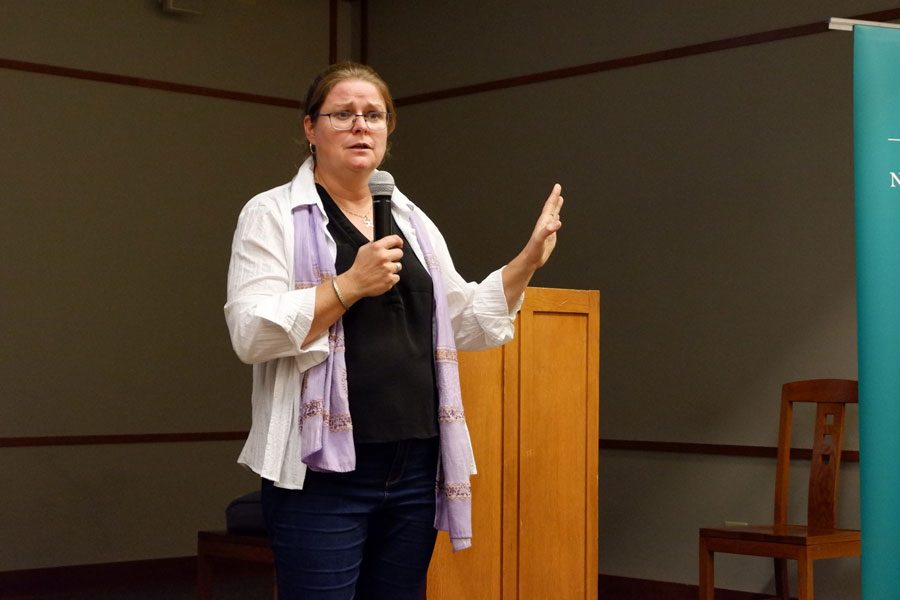 Author Joshka Wessels speaks at an Evanston Public Library event. She released a book about the stories of documentary filmmakers in Syria.

Author Joshka Wessels shared her experiences chronicling the stories of documentary filmmakers in Syria at a Monday event at the Evanston Public Library.

Wessels, the author of a book titled “Documenting Syria,” was the first lecturer in the fall 2019 series on political and social issues in the Middle East, co-sponsored by Northwestern University’s Middle East and North African Studies Program and the Evanston Public Library. The partnership began in January 2015.

During the presentation, she detailed stories of revolutionary Syrian filmmakers as they faced government censorship and war zone conflicts. It was the bravery of these people, Wessels said, and the realization that few had heard their stories that compelled her to share them.

Throughout the presentation, Wessels shared footage from a variety of documentaries, and personal stories about her interactions with filmmakers. She spoke about documentarians who illustrate the growth of Syrian documentaries from the 1970s to the present, including Nabil Maleh, Mohamed Malas and Basil al-Sayed. She also explained how her experiences as an anthropologist and filmmaker informed her coverage.

Lorena Neal, the library’s Legal Literacy Librarian, said the selection of Wessels as a speaker was particularly impactful, as few people in the United States share her in-depth knowledge of Syrian media.

It is because of this unique point of view, Neal explained, that many Evanston residents were drawn to both Monday’s event and the lecture series as a whole.

“All knowledge is worth having, and the more you can expose people to different perspectives, the more they get perspectives on their own lives, on the world and on their role in it,” Neal told the Daily. “People want the opportunity to hear for themselves from those who have worked in the region.”

Evanston resident Ernie Norrman said he frequently attends events at the library to broaden his worldview and hear from people he may not have interacted with otherwise.

“We all should be staying informed about the world,” Norrman said “I think people in Evanston are more likely to do that. They’re more interested in what’s going on in other places. Having programs like this engage the intellectual wealth of the community as a whole.”

Wessels said interacting with diverse perspectives will hopefully broaden the understanding of those who encounter her stories.

Wessels hopes that people who learn about Syrian media from her book will be encouraged to “break down the East-West dichotomy” and learn more about the diversity of all of Middle Eastern culture.

“It’s great to see that people are engaged like this,” Wessels said. “They don’t always get information like this from the media, so it’s nice to get some more grounded insight. I hope that, through tonight, people will begin to form a human connection with the subject.”