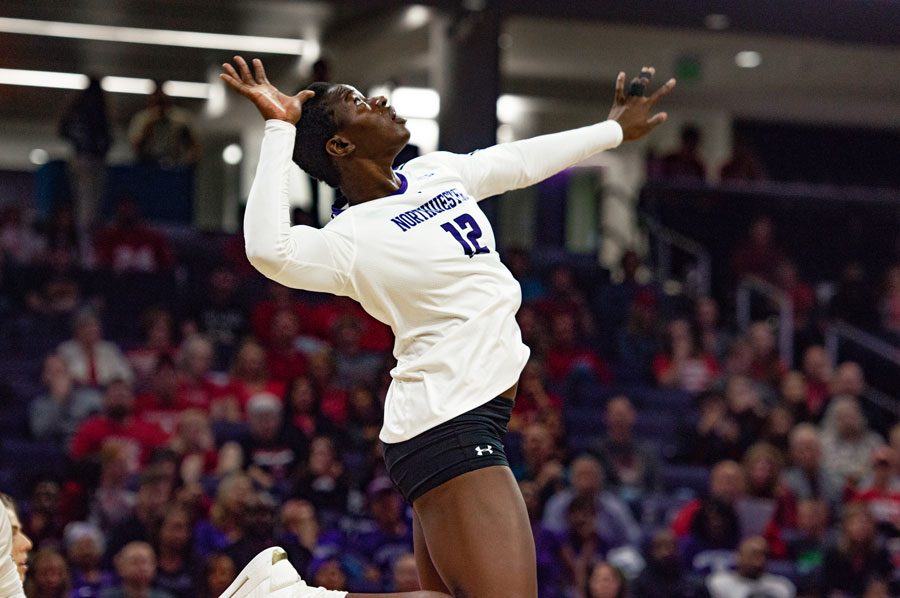 Temi Thomas-Ailara stares at her opponent. The freshman outside hitter led the team with 21 kills against Purdue.

Northwestern got off to a rocky start in Big Ten play this weekend, opening with back-to-back losses against Iowa and No. 3 Nebraska.

Friday’s matchup against the Hawkeyes (7-6, 1-1 Big Ten) was competitive in every set. The Wildcats (9-5, 0-2) took an early 11-8 lead in the first set thanks to three consecutive service aces from freshman outside hitter Temi Thomas-Ailara. However, the Hawkeyes bounced back, finishing on an 8-1 run to win the set 25-17.

NU responded well in the second set, edging Iowa 25-23 behind another dominant performance from Thomas-Ailara. Through two sets, she fired 10 kills and delivered five service aces.

In a frightening moment midway through the third set, Thomas-Ailara spiked the ball directly into the face of Iowa outside hitter Griere Hughes, knocking her tooth out. Hughes would return to the game.

Sets three and four went Iowa’s way, with the Cats failing to close, losing by a combined five points in the final two sets. Coach Shane Davis attributed the 3-1 loss to chances that he feels his team let slip away. .

“There were probably 30 missed opportunities where it was an overpass or perfect situation where we ended up giving the ball up,” Davis said. “We need to capitalize on those.”

Despite the loss to the Hawkeyes, NU shook off its Friday performance and started strong Saturday against the Cornhuskers (10-1, 2-0), jumping out to a 17-10 lead in the first set. Like Iowa a day before, Nebraska rallied and finished the set on a 15-4 run to win 25-21.

The second set looked competitive early, but a 5-0 run by the Cornhuskers gave them an insurmountable lead, resulting in a 25-17 win.

“Those runs were hesitations on our part,” he said. “Whether that’s swinging, whether that’s communicating the serve receive. Nebraska’s not gonna hesitate. If you hesitate and give them an easy ball they’re gonna come right back at you.”

NU stayed competitive in the third set, changing leads with the Cornhuskers 16 times. The Cats had multiple chances to close out the set, failing to convert three set points before falling to the Cornhuskers 30-28.

The crowd at Welsh-Ryan Arena became heavily involved, with most fans rising to their feet for the final points of the third set. Thomas-Ailara and Davis both said they were impressed with the fan engagement Saturday.

“The crowd was electric,” Davis said. “It was really great engagement. I thought the kids played hard. I thought it was a hard, tough battle by both teams.”

The Cats played better than last season against the number three team in the country, a team with three wins against top-25 opponents and back-to-back NCAA championship appearances.

Graduate setter Payton Chang said the team was optimistic after the match despite the 3-0 loss.

“I definitely think we improved a lot tonight,” Chang said. “We know we can play with all the top teams in the nation.”