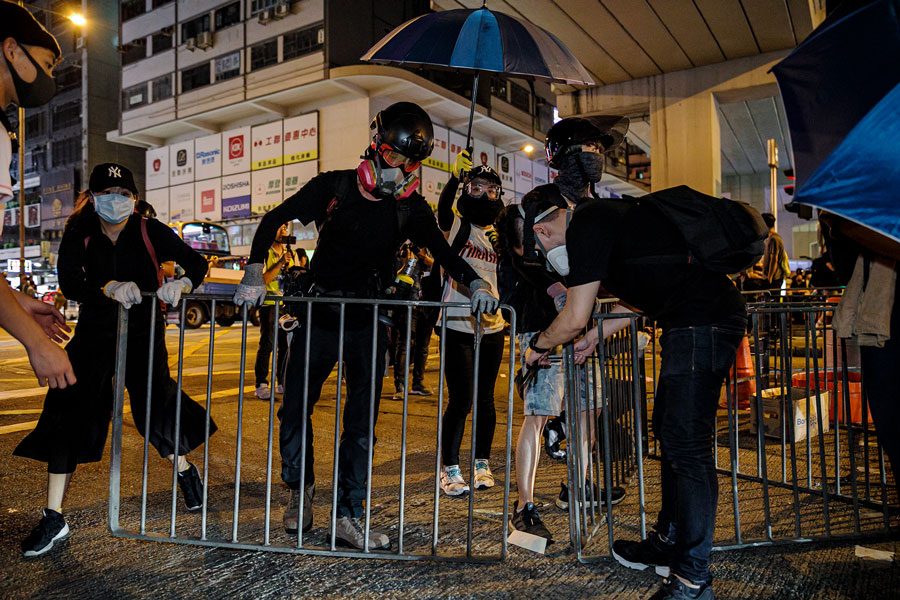 rotesters set up road blocks on Nathan Road, a busy main street, outside the Mong Kok police station in Hong Kong, on September 8, 2019.

Mariana Zárate, an international student from Venezuela, said being unable to participate in protests at home while being in the U.S. left her with a feeling of guilt.

“When you’re far and there’s demonstrations going on home, you feel very guilty,” she said. “And you want to be doing something and giving something to the country but you’re here living this reality.”

In Venezuela, opposition leader Juan Guaidó, head of the National Assembly, declared himself the interim president on Jan. 23, less than two weeks after President Nícolas Maduro took office despite tens of thousands of protestors calling his election unconstitutional. Over the summer, hundreds protested in front of the United Nations office in the capital city of Caracas, and Guaidó called for nationwide protests against Maduro’s Independence Day military parade.

Zárate spent five weeks at her home in Caracas interning at a non-governmental organization connecting families with nutritionists and medicine.

The Weinberg sophomore said she has friends who have been jailed after demonstrations. Friends of friends have gotten killed, she added. This summer, she said demonstrations were not as frequent as they’d been the previous two years, and she described a “weird hopelessness” setting in.

In 2018, only 15 students from Venezuela were enrolled at Northwestern. Zárate said the distance from her homeland is especially difficult when the people around her are not aware of what’s happening.

While informing people is one way to help, she said that there are many fundraising pages for medicines, food and school supplies — Zárate assisted a Chicago group that collected medical supplies for Venezuelans.

Over 10,000 miles west across the Pacific Ocean, another political movement was brewing. In February, Hong Kong’s Chief Executive Carrie Lam introduced an extradition bill that would allow the government to transfer criminal cases to Hong Kong and mainland China. Protesters saw it as a loophole to allow mainland officials to arrest political dissenters, an imposition on their democratic rights, and a bill that would fundamentally undermine the autonomy that was promised 1997, leading to Hong Kong’s largest protest since the handover.

McCormick sophomore Ishaan Narain lives in the Tsim Sha Tsui district of Hong Kong, where many of the protests took place. He said he saw clouds of tear gas from a distance, and people running from the police.

“Almost everybody was talking about it back home,” he said. “So even if you weren’t really involved in politics it affected enough of Hong Kongers’ daily life to talk about it.”

Narain said while the majority of students coming from international high schools and studying in American universities support the protestors, opinions seem to be shifting due to the effect protests had on daily life, especially after protestors temporarily shut down operations at Hong Kong International Airport.

When he left Hong Kong for the U.S., he said the airport was on lockdown, and only people with tickets could enter.

Weinberg junior Jenny Kang, an international student from Hong Kong, said she was only there for two days this summer, making her feel disconnected from the movement.

She said she tries to talk about the events, posting on her Instagram story and Facebook page, but she said that many international students have the privilege to disassociate from the protests.

For Kang, it’s not about telling her friends and followers what to think about the protests. She wants to remind them that Hong Kong is their home, and they will return there.

Kang added that because she can only rely on updates from friends and Western media, she has struggled to trust her own opinions. She said while the media has documented police brutality, there are some extremist protesters that have gone largely uncovered.

“The Western media and anglophone media specifically, a lot of the support is for the protestors, which I agree with now,” she said. “But I would’ve liked to come to that conclusion myself.”