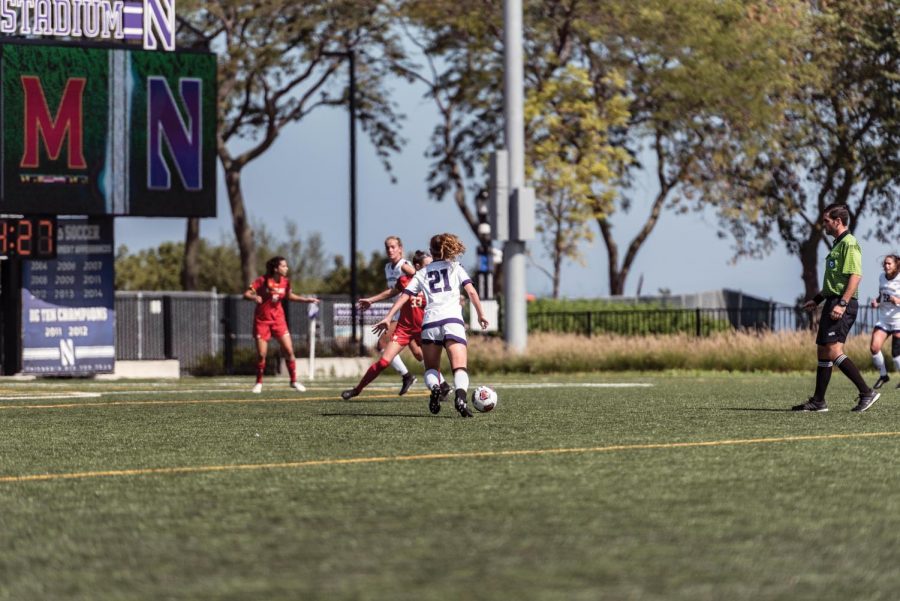 Madi Kennel prepares to kick the ball. The junior midfielder scored her first goal since 2017 on Thursday.

On Thursday night, Northwestern played in a hard-fought contest against Nebraska. Despite a rocky first half, the Wildcats bounced back in the second, picking up their first Big Ten win of the season with a 1-0 victory over the Cornhuskers.

The first half was quiet for the Wildcats (3-5-1, 1-1 Big Ten), with zero corner kicks to the Cornhuskers’ (2-6-2, 1-2) six and only one shot on goal from junior midfielder Kylie Fisher. But NU looked like a different team in the second half, dominating possession and showing strong defense in back.

“(Nebraska’s) a very pressing team,” coach Michael Moynihan said. “It makes you feel very frantic, but once you break the pressure… there’s lots of spaces, and we were able to exploit them.”

In the opening minutes of the second half, Nebraska forward Brenna Ochoa crossed the ball to forward Adriana Maldonado, who knocked the ball to the right, past sophomore goalkeeper Mackenzie Wood.

Luckily, freshman outside back Marianna Annest was there to stop it with her left foot.

“I just dropped in,” Annest said. “I saw she was looking far post and tried to get anything I could on it, and I think I got lucky to do so, but I’m glad I was in that right spot.”

Because the back line is still new — with only one returning player in sophomore Julietta Thron — players have been shifting around positions.

Annest said she hopes this victory gives the back line momentum.

“We were really compact, we were really organized and we did a great job out there today, so hopefully we can keep that,” she said.

NU notched its lone goal in the 72nd minute. Freshman defender Danika Austin sent in a cross from the right side, and junior midfielder Madi Kennel — whose last goal came in 2017 — tapped the ball in the center of the net, sliding her whole body forward to do so.

“I hadn’t scored since the beginning of my freshman year, so it was a big moment for me and I think big moment for this team,” Kennel said. “We’re hoping this is where we turn things around for our season.”

NU will hope for that turnaround — and second Big Ten win — this Sunday when it battles Iowa in Iowa City. Kennel said she hopes the Cats will have an aggressive start against the Hawkeyes and not wait until halftime to “come out strong.”

Moynihan added that he wants NU to think more about its ball possession throughout the game.

“Even though our possession was better, there’s still a lot of moments that we can clean up, especially in transition moments,” Moynihan said. “Once moving the ball, we really need to be more consistent with possessing it once we win it and in the moments right afterward.”