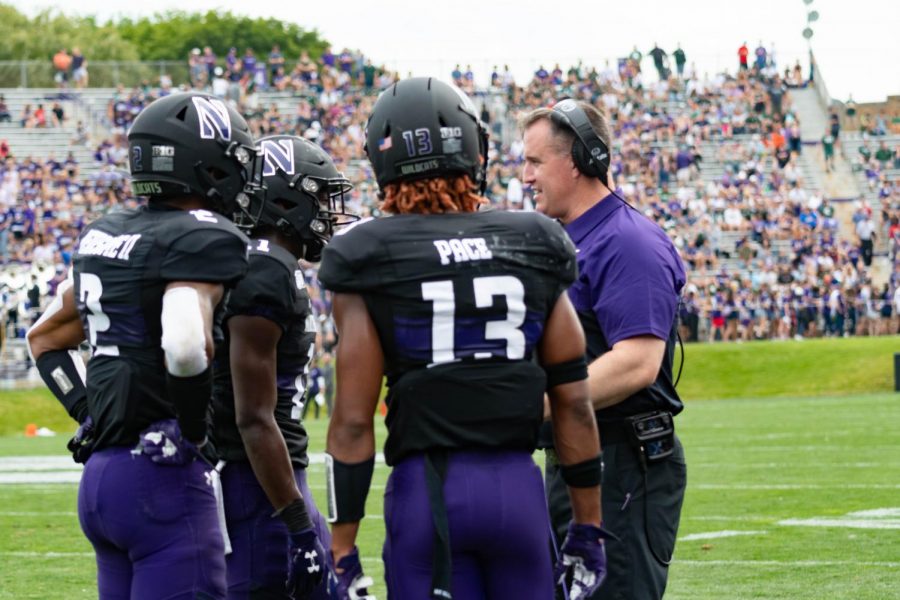 Pat Fitzgerald talks with members of the Northwestern secondary. The unit has battled injuries so far this season.

Prior to the start of the season, Trae Williams expressed his excitement that Northwestern’s secondary was finally fully healthy after being consistently banged up the last two years.

With juniors JR Pace and Travis Whillock slated to start at safety and Williams starting opposite sophomore Greg Newsome II at cornerback, the Wildcats’ defensive backfield looked to be as strong as ever.

And then the injury bug bit again.

Williams, the lone senior in the group, sustained a leg injury in the second quarter of NU’s season opener at Stanford. He returned two weeks later against UNLV, but did not play last Saturday against Michigan State and was not listed on the Cats’ two-deep for this week.

“Obviously (Williams) wants to be out there,” defensive backs coach Matt MacPherson said. “He’s a captain and he understands that part of his job if he’s not out there on the field is to be able to help guys on the sideline.”

Williams’ main replacement has been redshirt freshman A.J. Hampton, and opposing offenses have picked on him since the moment Williams left the game against the Cardinal. He missed several tackles that led to Stanford’s only offensive touchdown, and last week was beaten in coverage repeatedly by Michigan State’s receivers.

Coach Pat Fitzgerald said at Monday’s press conference that he and his staff need to coach Hampton better.

“He’s a young guy out there getting experience,” Fitzgerald said. “We’ve got to get Trae back sooner or later, but A.J.’s got to trust the calls and just execute. When he did, he was really good. Unfortunately, when he didn’t, or we didn’t help him — which we have to — Michigan State was able to make explosive plays.”

While much of the focus has been on Hampton and his struggles, Newsome has quietly become one of the most improved players on NU’s roster. Newsome broke up four passes against the Spartans and leads the country with 2.3 pass breakups per game.

Newsome had some rough moments when healthy last season, similar to Hampton so far this year. He said he is in a better place mentally compared to a year ago, which has helped him anticipate where the plays will be run.

“It’s all mental,” Newsome said. “The game is 80 percent mental, 20 percent reaction. This season, my film study is a lot better. I’m getting used to quarterbacks and what they like and what the opposing offense likes. It’s all about knowing your opponent really well.”

If Williams continues to miss time, the Cats do have reinforcements, several of whom were thrust into action last year due to injuries within the unit. Sophomore Cameron Ruiz made 26 tackles in 2018, had four pass breakups and even blocked a punt against Notre Dame. Senior Roderick Campbell, who made four tackles against UNLV, is also an option.

MacPherson said Newsome has been helping Hampton learn the ropes and emphasized that defensive backs must have short memories, as their mistakes are easy to spot.

“A.J. felt bad last week. The thing you have to tell him is it should hurt, you should want to be better,” MacPherson said. “But playing DB is hard. You’re exposed out there. Your mistakes are not like everybody else’s that are covered up in a big pile. Your mistakes are out there for everybody to see. So part of being a DB is understanding, ‘I have to flush what happened before, and now I have to move onto the next play.’”