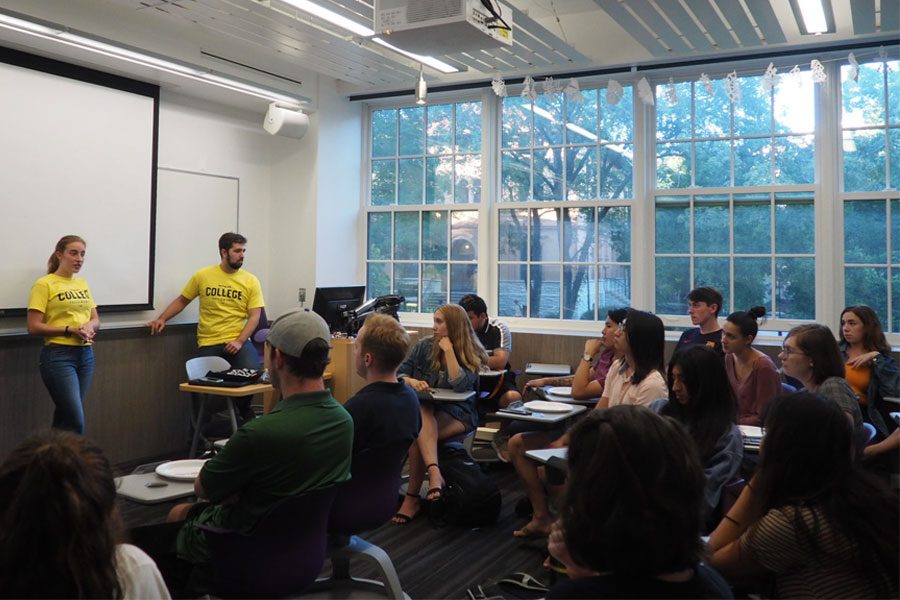 Swing Left holds college kickoff at Northwestern for the first time. The group focuses on recruiting Millennials and Gen Zers to strategize, train and connect with other college members for political causes.

The group held its campus kickoff at Northwestern this Thursday.

Swing Left focuses on recruiting Millennial and Gen Z voters to strategize, train and connect with other college students for political causes. NU students gathered at Kresge Hall for the information session to learn about getting involved with letter-writing campaigns, phone banking and other forms of political outreach in key elections.

“I hope to at least do something,” Weinberg junior Steven Du said. “There are a lot of times where it feels like it’s very hard to do anything, especially in this political climate.”

Weinberg sophomore Sara McCoy said she wanted to be more politically engaged with issues she’s passionate about, such as climate change and gun control. She said she wanted to get out of the Northwestern “bubble” learning more about sociopolitical issues.

Swing Left connects progressive voters with tangible actions they can take in larger campaigns. It also focuses on empowering young voters through its college chapters, according to its website as Gen Zers like Du and McCoy are projected to make up one-tenth of eligible voters by 2020.

Tyler Lardieri, a Swing Left Fellow, said he was excited to lead grassroots efforts on NU’s campus. The Weinberg senior emphasized that now is an important time to get involved, given that the census and gerrymandering may impact the political environment for decades to come.

“As a young person, as someone who is passionate about my future and the future of others, I consider it very important to take action now,” Lardieri said.

Before the fellowship, Lardieri volunteered for Swing Left during the 2018 election in constituent outreach through phone banking and letter writing.

Meredith Ellison, another Swing Left Fellow, previously volunteered in a voter registration drive for the organization in Virginia. The Weinberg sophomore said she’s passionate about climate change and voting rights and looks forward to developing the organization’s presence on NU campus through the kickoff.

“(The event) was all about telling people what we’re about, what they can expect from us from the future and introduce Swing Left,” Ellison said. “I was really happy with the turnout.”

In their most recent efforts, Swing Left is concentrating on mobilizing Democratic votes in the Virginia state election — which will take place on Nov. 5 — according to the fellows. Swing Left will hold a letter-writing campaign this Sunday at NU and host various organizing efforts for Virginia and communities in Evanston and Chicago this fall.

After that, Swing Left will shift their efforts to other key swing states holding elections.

“There’s no such thing as doing something too small,” Ellison said. “There are really small, manageable things that Swing Left gives you to do that do make a difference.”