Volleyball: In fourth season under Davis, NU looks to improve in Big Ten 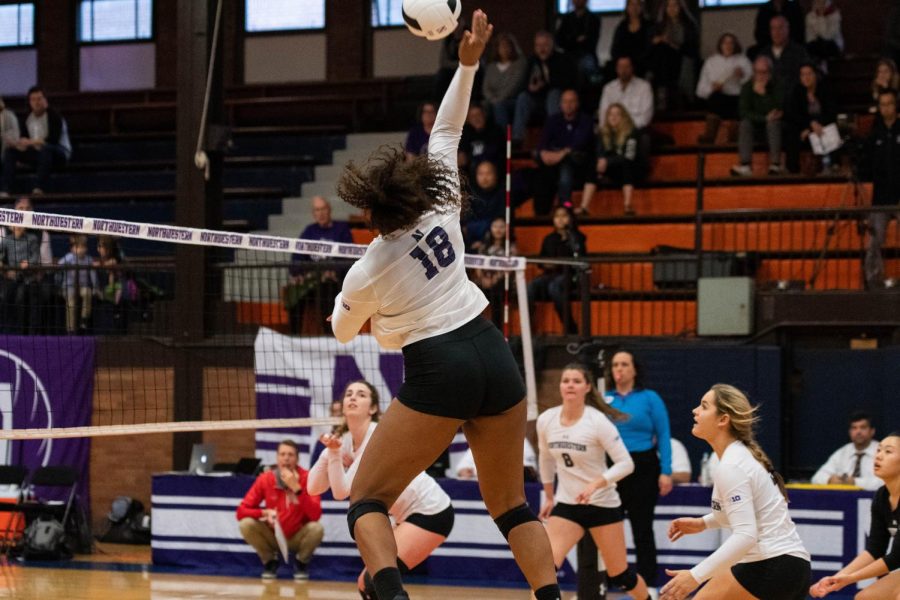 Nia Robinson hits the ball. The junior outside hitter is second on the team in points.

Despite losing records in the first three seasons under coach Shane Davis, Northwestern has always fared well in non-conference play.

From 2016-2018, the Wildcats have combined for a 27-9 record in early season tournaments before Big Ten play.

But it’s not how you start, it’s how you finish. NU’s (9-3) downfall has been conference play, where they finished as one of the bottom four teams in each of the previous three seasons. Fortunately, with an entire returning squad, in addition to recruits, the Cats are primed to improve on last season’s 6-14 record in the Big Ten.

“The carryover has been really good,” coach Davis said. “They’re more disciplined, they’re working harder than they ever have ever worked and they’re showing a lot of resiliency as a team, which is needed in the Big Ten.”

NU will have to test their discipline and resiliency at home this weekend against their first set of Big Ten opponents: Iowa and No. 3 Nebraska.

Last season, the Cats and Hawkeyes looked evenly-matched, playing to five sets in both games and splitting the season series. At the end of the season, Iowa (6-5) was ahead of NU in the standings by just one game — but the Cats have a chance to change that this year.

Davis said the team is deeper this year. At outside hitter, NU has loads of talent with junior Nia Robinson and sophomore Abryanna Cannon, two of the team’s top three scorers from last season, as well as freshman Temi Thomas-Ailara, this year’s points leader through nine games.

On the other side of the net, the Cats will have to contend with the Buzziero sisters, who are the Hawkeyes’ top two scorers. Sophomore setter Courtney Buzziero, the team leader with 137 points, has been particularly effective on defense, as she’s recorded 11 digs in two of Iowa’s last three contests. Her sister Meghan, a senior outside hitter, finished the last game with 10 digs and 26 over the last three contests.

“It’s going to be a hard-fought battle on both sides,” Davis said. “They’ve got a really fast offense, so we’ve gotta be able to do our part on our serves…Those kids play hard, our kids play hard, as expected.”

Nebraska, who received six first-place votes in this week’s coach’s poll, averages 2.41 blocks per set this season. But NU comes into the game with 2.77 blocks per game, good for 15th in the country.

The Cats will have plenty of opportunities to show how they stack up against the Big Ten, and it all starts this weekend. NU has improved its conference record each season under Davis, but this season, the fourth-year coach said the team will take it one game at a time.

“We showed a little bit of clip earlier in the week on Nebraska… but other than that, the last couple of days have been about Iowa,” Davis said. “(The team’s) just focused on Iowa, and that’s where the conversation’s been.”