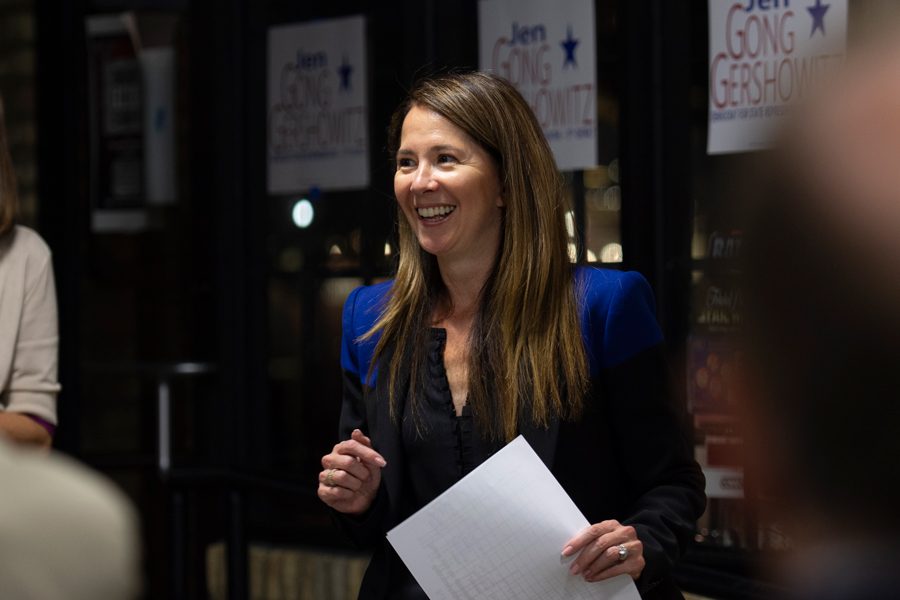 State Rep. Jennifer Gong-Gershowitz (D-Glenview) delivers a speech to a crowd of supporters at the Ten Ninety Brewing Co. Thursday. The event celebrated her campaign for re-election.

GLENVIEW — State Rep. Jennifer Gong-Gershowitz (D-Glenview) kicked off her campaign for the 2020 election Thursday with a formal gathering of supporters.

Gong-Gershowitz and her team hosted the celebration at the Ten Ninety Brewing Co. in Glenview. She and state Sen. Laura Fine (D-Evanston) both delivered speeches after they gathered signatures to petition for Gong-Gershowitz’s official nomination.

“Tonight was a night to be surrounded by my friends, my family and the supporters who are out there working hard for me and giving me the opportunity to do what I do,” Gong-Gershowitz told The Daily at the event. “Tonight was just really about being able to say thank you.”

Gong-Gershowitz was elected to serve the 17th District of Illinois in 2018, which includes parts of Evanston. If re-elected, she said she hopes to continue fighting for progressive policies including reproductive health, immigrant rights and environmental protection.

She has worked as an immigration attorney for 20 years, the only member of the Illinois General Assembly to serve such a position. She said she felt motivated to run for office when President Donald Trump began to enforce harsher immigration policies. As an Asian American, she said she believed it was time to add a different voice to politics.

Several local politicians attended the kick-off to show support for the campaign. Among them was Cook County Commissioner Scott Britton.

Britton campaigned alongside Gong-Gershowitz back in 2018. Over the past year, he said he has witnessed the high quantity of progressive legislation Gong-Gershowitz helped pass during her term.

Tracy Muhl, a committee member of Democrats of Northfield Township, managed the petition signings at the kick-off. Muhl said other states require candidates to pay a fee, while all Illinois candidates need to work to meet or exceed a threshold of petition signatures.

“It does take a lot of time, but it also shows that there’s a strong commitment to these candidates,” she said. “People who volunteer to circulate petitions make a meaningful contribution to getting people on the ballot.”

During her first term, Gong-Gershowitz co-sponsored the Illinois Reproductive Health Act, which passed successfully in June 2019. She also voted in favor of legalizing recreational marijuana, allocating billions in funding to repair infrastructure and protecting women’s rights in the workplace and beyond.

If re-elected, Gong-Gershowitz said she looks forward to ensuring the federal government also adopts a progressive agenda. She needs 833 petition signatures to earn a spot on the Democratic ballot in 2020 and so far faces no opposition for the primary elections. In 2018, she edged out four other Democrats in the primary before winning the seat.

“It’s nice to have people that are smart have the capacity to handle a lot of different issues,” said Thom Mannard, a lobbyist and advocate for several local medical facilities. “Jennifer is somebody who’s really built a good reputation of all sides of an issue and then trying to make decisions based upon what’s best for her constituency.”