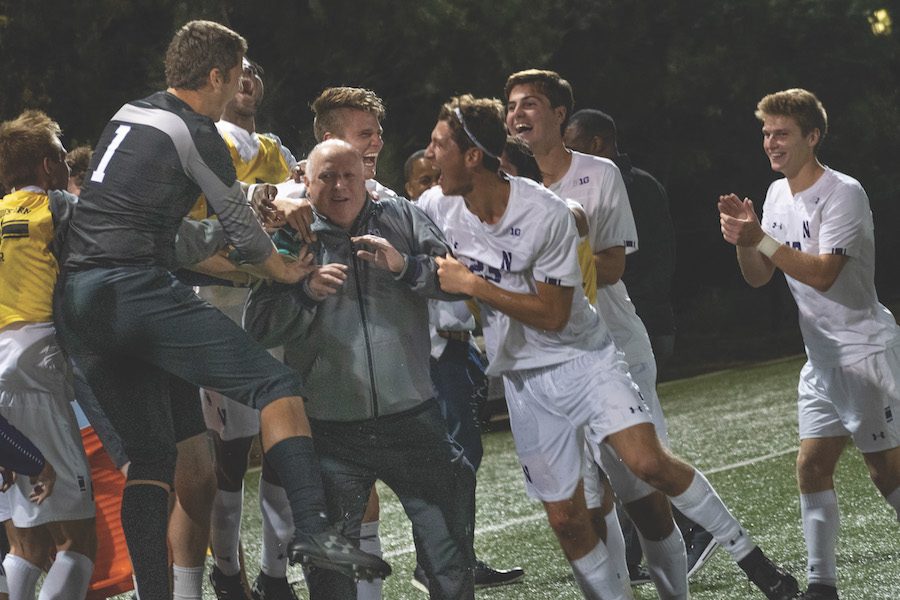 Tim Lenahan gets a Gatorade shower. The Wildcats coach recorded his 300th career win on Tuesday.

As Illinois-Chicago midfielder Jesus Perez headed the ball over the outstretched arms of Northwestern junior goalie Miha Miskovic in the 60th minute, the energy level of the Wildcats’ fans dropped in Martin Stadium.

Tuesday night’s game had the chance to be a special night — a win over the Flames would’ve marked the team’s first four-game winning streak since 2013 and, most importantly, the 300th of coach Tim Lenahan’s career.

But UIC (6-2) had seized momentum — the Flames had controlled the ball for the majority of the first 60 minutes and finally had the goal to show for it. While the purple-clad crowd lacked the excitement from a few minutes before, NU (5-3) didn’t seem to get flustered by the deficit — a sign of their maturity compared to last season.

In the final 30 minutes of regular time in Tuesday’s game, the Cats were extremely aggressive on the offensive end, attacking the Flames’ backline, who were down a player due to a first-half red card. Just when it seemed like NU couldn’t break through, freshman forward Ugo Achara Jr. knotted up the game at one with five minutes remaining.

And, in overtime, sophomore forward Jose Del Valle scored to give the Cats a 2-1 victory and the record-setting night that they had hoped for.

Last season against UIC, the Cats got out to an early lead only to give up three second-half goals and let the game slip away. But this time around, NU showed how much they have matured with a season of experience.

For the majority of the 2018 season, Lenahan emphasized that last year’s young team was learning how to compete and this season lead into more wins. This year’s squad is rewarding the faith Lehanan put in them, as they are now in the midst of their longest win streak since 2013.

The Cats have had stellar all-around play from a variety of players on the roster ranging from sophomore midfielder Bardia Kimiavi to senior midfielder Matt Moderwell, who are tied for the team lead with eight points. But it was Del Valle who ultimately scored the game winner that gave Lenahan his milestone 300th win.

“I’m really happy for my coach,” Del Valle said. “I wanted to congratulate him and thank him for everything… he told me, ‘Thank you for the goal (and) that I made this possible for him.’”

With the victory, Lenahan now has 174 wins at NU since he took prior to the 2001 season. Now in his 19th season, Northwestern’s winningest men’s soccer coach has gone to nine NCAA Tournament appearances and won one Big Ten Coach of the Year award.

But while Lenahan recognized that tonight was a big win, he wants his team to stay focused on the task at hand — Big Ten play.

“We have Ohio State coming up on Friday,” Lenahan said. “I’m going to celebrate this win, but they do not get to do that.”