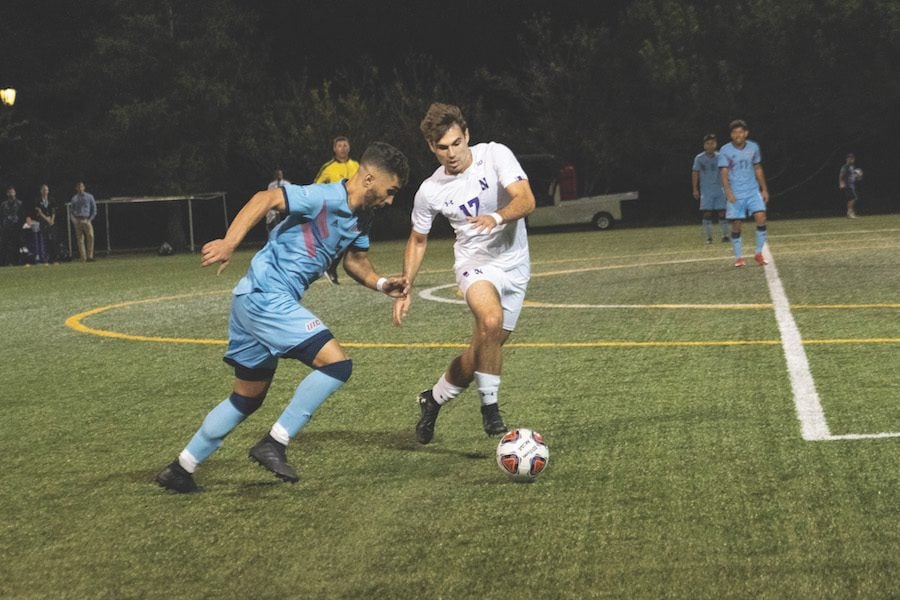 Sean Lynch watches the ball. The senior midfielder helped NU hold the Flames to one goal.

After Jose Del Valle tapped the ball from his left foot to his right, turned around and sent the golden goal into the net, he sprinted toward the sideline.

Coach Tim Lenahan found the sophomore forward, hugged him and said “Thank you.”

Del Valle’s game winner in the 98th minute gave Lenahan his 300th career win, which the 30-year coach said he’s planning to celebrate. Lenahan got a Gatorade bath and a tribute on the scoreboard after he hugged Del Valle, whose goal pushed NU (5-3, 1-0 Big Ten) to a 2-1 overtime win over Illinois-Chicago (6-2).

Del Valle attempted another shot before his game winner, but his clutch goal was his first goal of the season. He received a cross from senior midfielder Matt Moderwall near the left post with his back facing the goal, spun around and got the ball on his right foot. After that, Del Valle put the ball into the top of the net.

Lenahan said he hasn’t seen Del Valle practice that specific move before, but it was the type of play he envisioned when he recruited him from Real Madrid’s system. Lenahan said the game winner highlights Del Valle’s ability that he’s always known he had.

“You have to figure out how to find ways to get free and get your shot,” Lenahan said. “He really sold it well to be able to spin around and get the ball on his right foot. That’s his money shot.”

For most of the game, it looked like Lenahan wouldn’t get to celebrate. The Cats trailed 1-0 for most of the second half, and didn’t score until freshman forward Ugo Achara Jr.’s leaping header in the 85th minute.

Morderwall also assisted on this one, sending a cross from the left to Achara Jr. in the middle of the box. Achara Jr. rose over the Flames’ defenders and put the ball in the upper left corner, earning the first goal of his career.

Before Achara Jr.’s goal, NU struggled offensively and only had two total shots on goal. UIC outshot the Cats 11-4 in regulation and dominated possession. The Flames took a one-goal lead in the 60th minute.

UIC midfielder Eduardo Garcia was open on the right wing, and he took his time to send a cross into the box as several of his teammates swarmed the net. The pass found forward Jesus Perez near the goal line, and Perez converted the header to give UIC the early advantage.

Achara Jr. subbed into the game with 12 minutes remaining, right as the Cats started pressing more on the attack in an effort to prevent a second consecutive loss to the Flames. Achara Jr. said he remembers telling him teammates as he ran onto the field that they needed to be more aggressive, and NU responded with its first comeback win of the season.

“It was a collective effort that we wanted to win this,” Achara Jr. said. “When I was coming in, there was that new hunger that we don’t want to lose at home or anywhere. We were running at them, giving it all we had and deciding we were going to win.”