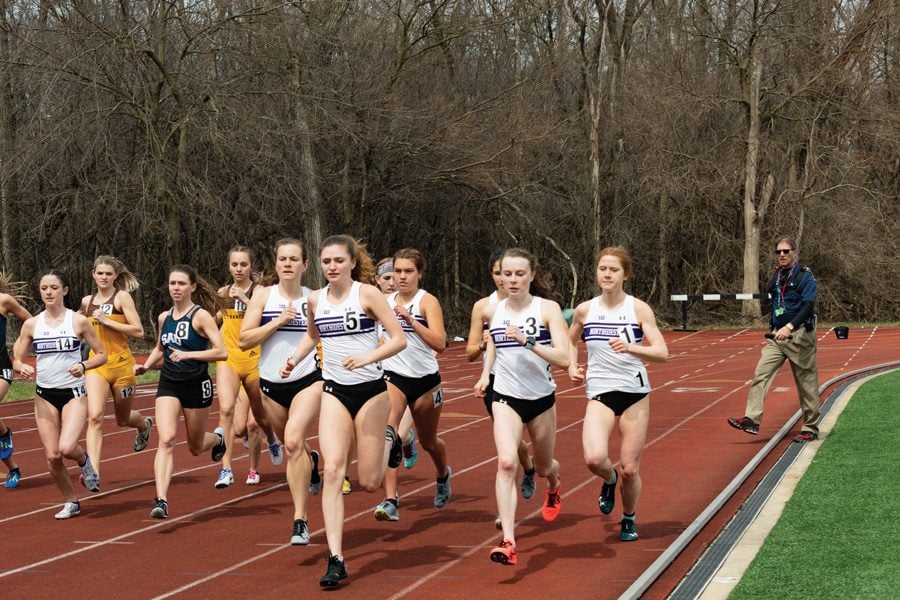 Northwestern runners race down the track. Coach Jill Miller in a Q&A with The Daily said the COVID-19 pandemic has greatly impacted her program’s practices and training regimens.

After two weeks off from racing, Northwestern will return to the start line on Saturday to compete in the Loyola Lakefront Invite and the Inter-Regional/Big Ten Preview.

While some of the team will head downtown for the Loyola Lakefront Invite, the fastest runners will travel to Columbus, Ohio for the Inter-Regional/Big Ten Preview. This will be the Wildcats’ first chance this season to run the course they’ll compete on in the conference championship in November.

Coach Jill Miller, in her first year with NU, said the squad is already looking toward those later meets.

“We are concentrating on building a foundation to support success in the championship season,” Miller said.

Thus far, the Cats have finished in the bottom half of all their meets. In the Illini Open on Aug. 30, NU placed third out of four teams in the 5K course, with senior Kelly O’Brien and sophomore Rachel McCardell coming on top for the Cats at 17:33.8 and 17:34.5, respectively.

While those two finished within the top seven, the next NU runner, sophomore Olivia Verbeke, came in 25th place and 10 of her teammates came in behind her.

The Cats then placed fifth of eight on Sept. 13 at the Illinois State Invite, with freshman Kalea Bartolotto coming in first for NU and 22nd overall.

And this weekend won’t be any easier.

The Big Ten Preview will feature teams like Michigan and Illinois, who have plenty of speed on their rosters. Wolverine freshman Ericka VanderLende, for instance, has already won Big Ten Cross Country Athlete of the Week twice this season, running sub-17-minute 5Ks.

Fighting Illini junior Rebecca Craddock is also a threat, reaching her personal record of 16:58.1 at the Illini Open, beating O’Brien by over 35 seconds.

Loyola runners will also be tough in Chicago. Ramblers sophomore Mimi Reimers stole first at the Illinois State Invite with a time of 17:24.0, and a pack of teammates wasn’t too far behind.

The Cats will race at 8 a.m. in Chicago and 10 a.m. in Columbus this Saturday.