Dittmar exhibit features the relationship between plants and human 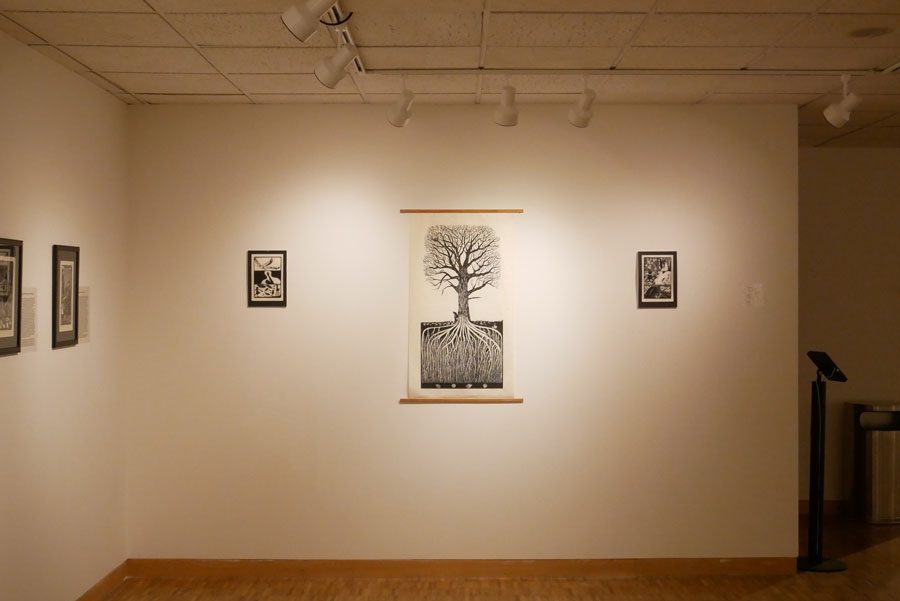 Gabriella Boros’ woodblock printings “The Old Oak,” “Walk,” and “Ruach” (From left to right). Boros explores the entangled connection between plants and humans in the exhibit “Narrative Botanics” which is now on view at Dittmar through Oct. 13.

Growing up in Israel, multi-media artist Gabriella Boros embarked on countless adventures around her home country. It was during one of these trips that Boros learned from her dad, an immunologist, about the healing ability of herbs. With her passion for science and nature, Boros continues to explore the power of medicinal plants through her artwork in “Narrative Botanics.”

“Narrative Botanics” is Dittmar Gallery’s new exhibit that runs through Oct.13. Gallery attendees will have an opportunity to meet Boros at the opening reception on Thursday, Sept. 26, from 6 to 8 p.m. in the gallery space.

The exhibit features five bodies of Boros’s work that amount to 43 woodblock printings, which focus on the entangled connection between plants and humans through the lens of personal fables, religious subjects, scientific and political work.

Boros began her creative process with written concepts that inform how she builds the visual images through woodcuts. McCormick senior Ram Tiwari, one of the two curators of the exhibit, said the technique Boros used gave her work a strong storytelling quality.

“They are incredibly intricate and detailed,” said Tiwari. “Each piece of her woodblock printings is like a cinematic scene with a story behind it.”

According to Tiwari, Boros’ heritage and background come through in her love for narrative.

Born in Jerusalem in the 1960s, Boros had a tough childhood. A daughter of Holocaust survivors, she said she grew up with bedtime stories of work camps and genocide. Her upbringing was also shaped by the Six-Day War in 1967, during which she sat in an air-raid shelter and watched bombers as they flew over.

Upon coming to the U.S. with her family when she was 6, Boros said she felt ostracized since she refused to blend in and conform to mainstream American values.

She said those experiences made her believe in the interconnectedness of people, a theme that plays an integral part in her storytelling.

“Because of all these hard times I had, I believe it is important to recognize that people of all kinds, of all races and religions, are connected in some way,” Boros said.

In “Botanical Folktales of Healing,” a series in “Narrative Botanics,” Boros illustrates a collection of mythologies that each describe an herbal remedy. They show how different countries in the world, such as China and Poland, adopt botany in curing diseases — and ultimately demonstrate that medicinal plants are common across cultures.

“Even though the narration can be exotic to people who are not part of these cultures, the audience can still relate to the message behind them,” Reyes said.