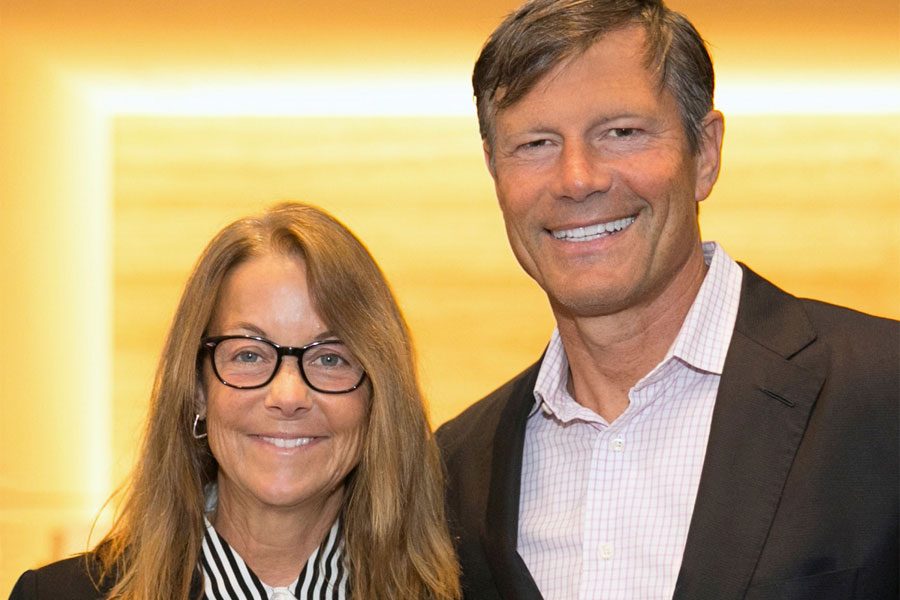 Laurie and Jeff Ubben. The couple made a $50 million donation to student scholarships, the largest gift made to financial aid in University history.

Northwestern received a $50 million donation towards scholarships for undergraduate, graduate, and professional school students — the largest gift made to financial aid in the University’s history.

The donation by trustee and alumnus Jeff Ubben (Kellogg ’87) and his wife Laurie Ubben will support the University’s Thrive at Northwestern initiative under We Will. The Campaign for Northwestern. The initiative’s priorities including enhancing financial aid resources and new programs, services, and mentoring opportunities for low-income and first-generation college students to help all students feel welcomed and supported at Northwestern.

In a University release, President Morton Schapiro thanked the Ubben family for its “remarkable generosity” that will help generations of highly qualified students obtain a Northwestern education.

“Making Northwestern accessible to talented students from every walk of life is essential to our efforts to build the most vibrant academic community possible,” Schapiro wrote in the release.

The University states that financial aid is a top funding priority for Northwestern. Northwestern has enrolled 9 percentage points more Pell Grant-eligible students in incoming classes over the past decade. Last year, 61 percent of undergraduate students and 47 percent of graduate and professional students were able to receive financial aid.

Though Northwestern continued its move up the rankings, it fared poorly in the Top Performers on Social Mobility ranking, landing in the No. 251 spot with other highly selective universities like Cornell University, Stanford University and Duke University.

This fall, the University has eliminated loans from undergraduate financial aid packages. Undergraduate students can still take out federal and private loans for other expenses.

In 2017, Jeff Ubben completed a nine-year tenure as chair of The Posse Foundation’s national board of directors, a foundation Northwestern has been a partner institution of since 2012. During his tenure, Jeff Ubben played an important role in developing Northwestern’s partnership with the college access and leadership development program.

“Laurie and I can think of nothing more worthy than to make a Northwestern degree accessible to as many outstanding students as possible,” Jeff Ubben said.