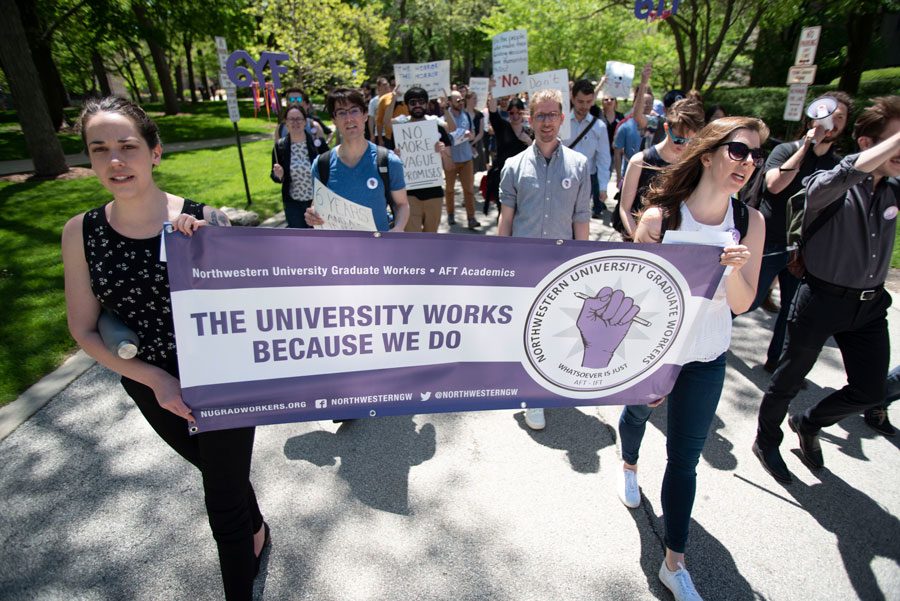 Student workers at Northwestern and other private universities would lose employee status and unionization rights under a proposed regulation by the National Labor Relations Board.

The proposal, announced last Friday, would strip all graduate students working as teaching and research assistants of federally backed rights to unionize and collectively bargain. The rule would only affect private universities, as the jurisdiction of the 1935 National Labor Relations Act is limited to the private sector.

The rule is a reversal of the 2016 landmark rule, borne out of a petition filed by a group of graduate students at Columbia University that granted them the ability to hold legally binding union votes. In August 2016, after the NLRB rule in the Columbia case, Northwestern said it did not classify graduate students as employees and did not support student unionization efforts in a University “Frequently Asked Questions” document on student unions.

“Northwestern believes that unionization and collective bargaining are not the appropriate methods to address concerns raised by student assistants,” the document stated.

Since then, five private universities have signed student union contracts and 15 have held union votes.

“They can see that grad students are unionizing and they’re trying to stop it,” Yang said, “and by ‘they’ I mean Trump, his NLRB, and the University. We don’t see why this rule has to come up unless somebody at the university is pushing it.”

The Friday proposal holds a 60-day consultation window. Over the next two months, NUGW will be working on a collective comment with student unions at the University of Chicago, Loyola University Chicago, Princeton University, Yale University and Brown University.

Northwestern, along with many other private institutions, argues that recognizing students as employees would create a hostile dynamic between the student and faculty bodies and interrupt an otherwise peaceful academic environment. Students, however, contend that administrators who have significant power over students’ academic and professional futures must be kept in check by unions.

Yang said she is disappointed by the University’s lack of regard for the importance of student labor.

“We take assistant shifts, we pay taxes,” Yang said. “The fact is that we are workers. If you look at the work that we do as TAs, as RAs, it’s absolutely work.”

The proposal is also politically motivated. Over the past two years, the Trump administration has steadily replaced members of the NLRB who championed the 2016 decision with a conservative majority. They’ve since been lowering obstacles for employers to oust worker unions.

NUGW, however, said it has renewed faith in the power of student unions after Aetna, Northwestern’s health insurance provider, ceded to student outrage and reversed changes to the Student Health Insurance Plan that made access to mental health treatment more expensive. Members of NUGW reached out directly to administrators demanding clarifications before the announcement was made.

Unlike Northwestern, the University of Chicago is “not opposed to unions,” the Provost Dan Diermeir wrote in a June statement this year. Despite echoing parts of Northwestern’s position on student unions — including the concern that a third-party mediator between faculty and students can compromise the academic environment — the University of Chicago believes a productive relationship with labor unions is possible.

“As always, the University stands for freedom of expression and respects these students’ rights to protest and express their views,” Diermeir wrote.

Richard Cohrs, director of communications and outreach of TGS, told the Daily that the school has no comment on the proposed NLRB rule at this time but continues to stand by the University’s 2016 statement, disappointing members of NUGW.

“What we want Northwestern to say is that ‘we do not support Trump and his NLRB,'” Yang said. “What we want is to make sure that they’re standing up for us rather than against us with Trump.”