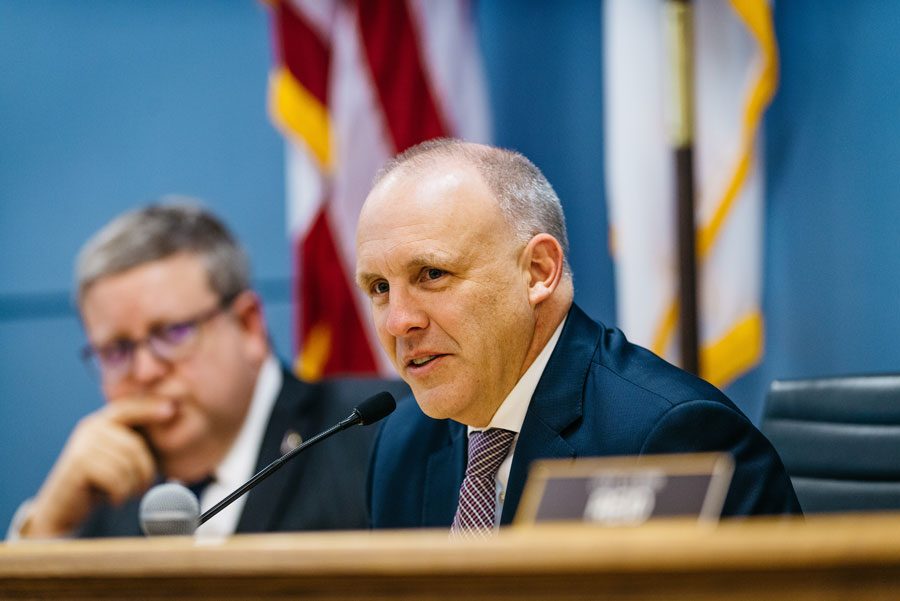 Mayor Steve Hagerty speaks at a city meeting. This summer, Hagerty called for a criminal investigation into the full City Council. Also, Northwestern is seeking zoning for professional sporting events in Welsh-Ryan Arena.

Mayor Steve Hagerty asked the Cook County sheriff to conduct a criminal probe into City Council, city staff and outside attorneys after confidential city documents were leaked in July.

Hagerty wrote that the only people with access to the documents included him, the nine aldermen, city manager Wally Bobkiewicz, seven of the city manager’s staff and Robbins Schwartz, the law firm that conducted the investigation into Reid. He added that if someone did leak the information, the action would qualify as Official Misconduct under the Illinois Official Misconduct Act, which would be a Class 3 felony.

“The release of the July 8 privileged and confidential Executive Session package, containing detailed information on the employee complaints and eavesdropping allegations and attorney-client privileged communications, is an extraordinary act of misconduct,” Hagerty wrote. “I have reason to believe that packet was released by an individual Aldermen acting without authorization of City Council.”

The Cook County’s sheriff’s office received Hagerty’s letter and started to review his request in July, according to The Chicago Tribune. The office did not immediately respond to The Daily’s request for an update on the investigation.

The law firm Robbins Schwartz investigated the claims and found that two of the complaints were filed three days before Reid’s attorney sent a letter to the city demanding the city comply with the clerk’s interpretation of FOIA laws, according to Patch. After disclosing the results of the investigation, the mayor asked aldermen to censure Reid at the July 15 council meeting.

Despite vocal opposition from Evanston residents, the city’s Plan Commission recommended that City Council approve Northwestern’s proposal that would allow for professional sporting and entertainment events at the Welsh-Ryan Arena.

The NU proposal requests a zoning change to “pursue hosting nationally recognized sporting events” at the arena, which can hold around 7,000 attendees, according to city documents.

Residents expressed concerns about traffic, parking, noise and safety at a meeting in June. They also restated their objections to the proposal at a City Council meeting last week, saying the area is too residential to accommodate such events.

NU initially wanted to hold professional sports events and concerts at Ryan Field as well but backed off earlier in the summer because of the resistance from neighbors. The issue also came up in 1996 when aldermen unanimously rejected a bid to host the Ameritech Cup, a women’s tennis tournament, at Welsh-Ryan Arena.

Ald. Eleanor Revelle (7th), whose ward encompasses the arena, told The Daily in June that she has been listening to her residents.

“I need to support my residents, so I’m a no vote at this point,” Revelle said in June. “I would like to think what happened in 1996 would be what happens again.”

University officials said the proposal is a “two-year pilot program” that the University, city and residents could revisit later.

Dave Davis, the University’s executive director for neighborhood community relations, told The Chicago Tribune that NU is looking to host family-friendly events that “align with the unique culture” in Evanston.

“I’m sensing a lot of mistrust,” Davis said at a June community meeting about the proposal. “We know we have to regain trust. Yes, we’re asking you to trust us, and that’s a big ask.”

Aldermen will have the final say on the proposal, though it is not on the agenda for the upcoming council meeting.