Men’s Soccer: In loss to Bowling Green, Cats get shut out for second straight game 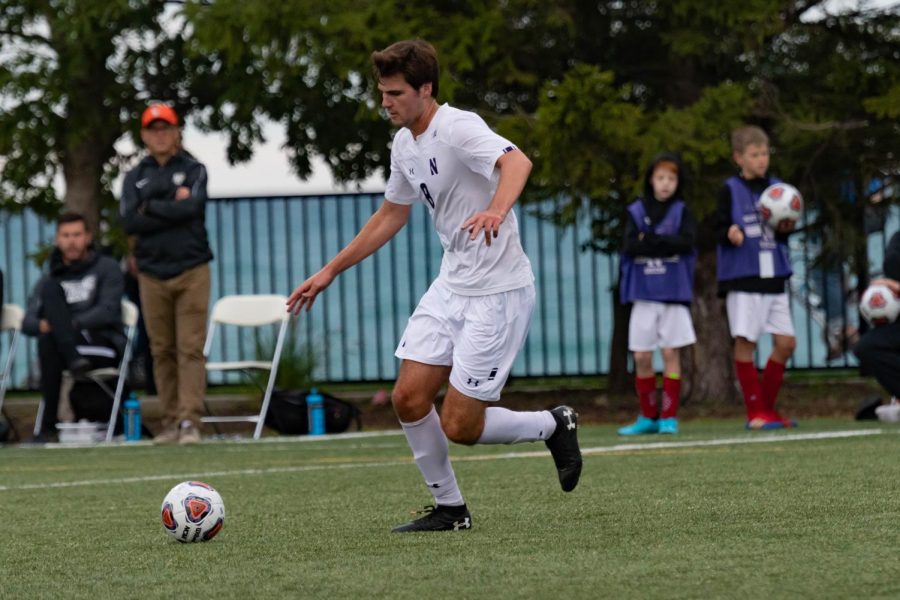 Mac Mazzola dribbles up the field. The senior had a shot on goal Sunday, but the Wildcats were still shut out against Bowling Green.

Things didn’t seem to fall in place for Northwestern on Sunday.

Despite having nine shots, nine corner kicks and possession for 51 percent of the game, the Wildcats (1-3) couldn’t put the pieces together for a goal — much less a win — against Bowling Green (3-0-1) in front of their home crowd at Martin Stadium.

With the 3-0 loss, NU has now been shut out in two consecutive games and has only scored once on 42 shots this season.

“Everybody goes through a little bit of a goal-scoring funk,” coach Tim Lenahan said. “Even when you’re fighting to score goals, you’ve got to find a way to keep it zero in the back, and we didn’t do that this weekend.”

The Falcons jumped on the board 23 minutes into the game after the referees called a foul on freshman defender Jack Ratterman for knocking down Bowling Green defender Achille Robin in the right side of the box. Falcon midfielder Charlie Maciejewski took the penalty kick and snuck the ball past goalkeeper Miha Miskovic.

Though some Cats players disputed the penalty, Lenahan thought the call against Ratterman was deserved.

“If you foul someone in the box, it’s a penalty kick,” Lenahan said. “It’s a learning experience for him.”

Bowling Green tacked on its second goal nearly 20 minutes later, when Robin received the ball in the box from Falcon midfielder Chris Sulllivan and slipped it around Miskovic into the bottom right corner.

NU looked livelier in the second half — outshooting Bowling Green five to three, taking six corner kicks and picking up five fouls — but despite the energy, the squad couldn’t stage a comeback.

“We’re creating chances, (and) I still think we have a very good team,” Lenahan said, praising senior forward Mac Mazzola, in particular, for his shot on goal in the second half.

Looking ahead, Lenahan said the team needed to improve its goal production and defensive work to succeed in its games against Western and Eastern Illinois next Thursday and Sunday, respectively.

“It’s a long season,” he said. “We’ll keep plugging away and hope for good things over the next couple weeks.”