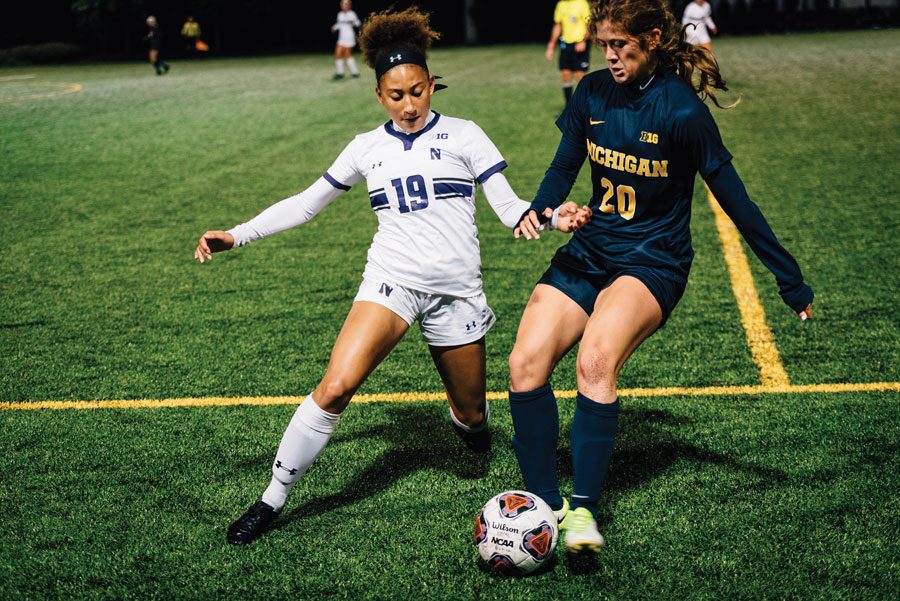 Nia Harris battles for the ball. The junior forward scored the second goal Thursday, sealing the win for Northwestern.

After a slow start to the season, Northwestern seemed to find its groove Thursday night against Cincinnati.

The 2-0 shutout over the Bearcats (1-4) in the City of Seven Hills — elevating the Wildcats’ record (2-2-1) to .500 — featured good soccer all around, critical saves from sophomore goalkeeper Mackenzie Wood and impressive goals from freshman forward Paige Miller and junior forward Nia Harris.

Miller put NU on the board just 10 minutes into the game. Freshman center back Danika Austin began the play by pushing the ball up from midfield and crossing it from the right side of the box — similar to her assist last weekend against William & Mary. Miller then received the ball at the goal-kick line and nicked it in from behind, the first goal of her career.

“I noticed that I didn’t have a shot near post, so I thought that my best bet was letting it (go) either between my legs and dummying it or clipping it from behind me,” Miller said. “I got kind of lucky that it slipped in past the keeper.”

Coach Michael Moynihan added that getting an early lead was “really nice,” since the Cats hadn’t done so yet this season.

NU continued to be aggressive the rest of the period, taking three more shots and earning a corner kick opportunity, but didn’t score again until the second half.

In the 68th minute, freshman defender Marianna Annest passed the ball from the top left side of the field and Harris slid forward to bump the ball in the back right corner of the net.

“I saw a gap between the defenders and I felt like ‘oh my gosh I’m going to get this ball,’” Harris said. “The ball came in and it was too close for any other part of my body, so I hit it off my stomach into the goal, and it was really exciting.”

Moynihan said he was happy for Harris and hoped this goal gave her more confidence, before praising Annest’s first-career assist.

The Cats’ backline also had a strong performance on Thursday, earning its first shutout of the year. Wood collected four saves and now has nine career shutouts — just one away from fifth place in program history.

Though Moynihan called Thursday’s victory a “good result,” he hopes the team will possess the ball more in Sunday’s match against Harvard in Cambridge, Mass.

Harris said her team’s performance in Cincinnati makes her optimistic for this weekend’s matchup.

“It was a great game today,” she said. “We all were doing well, and I just feel confident in the team and in myself, so I’m excited for the next game.”