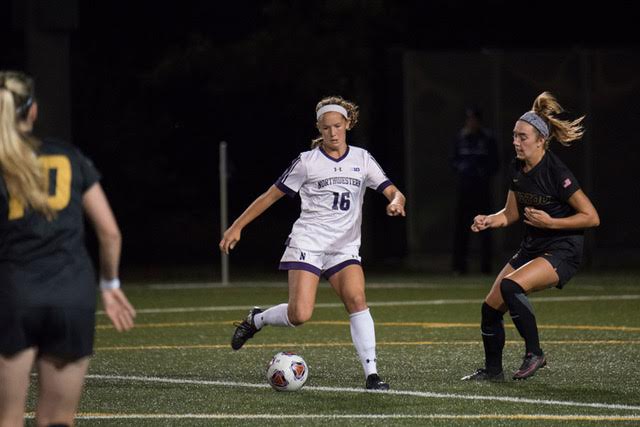 Mikayla Hampton dribbles the ball. The junior forward scored the second goal of her career for Northwestern on Sunday.

With its 2-1 victory over William & Mary at home on Sunday, Northwestern can finally add a tally to its win column.

The triumph came thanks to a steady performance by Wildcats goalie Mackenzie Wood and an aggressive attack from the NU offense that drilled two goals in a seven-minute span during the second half. Until Sunday, the squad had only scored once in three games.

The Cats (1-2-1) showed stronger offense in the second half of Sunday’s match. Though NU entered halftime scoreless — a trend in all its games thus far — the Cats managed to overtake the Tribe (1-3-0) in the 47th minute.

Freshman center back Danika Austin began the play leading up to the first goal, booting the ball from the half line up to sophomore defender Julietta Thron in the right corner of the field. Thron then crossed the ball to junior forward Mikayla Hampton, who headed it right over the arms of William & Mary goalie Maisy Fling for her second career goal.

NU piled on another goal seven minutes later, when freshman midfielder Aurea Martin ripped an upper 90 shot from outside the box.

“They were both beautiful goals — well worked and built up,” Moynihan said, who added the win was especially important for a young team to help them build confidence.

The Cats continued to play aggressively the rest of the half, picking up eight shots in total — three of which were on goal — and seven fouls. Wood also earned a pair of key saves, one coming from a shot at point-blank range just minutes after NU’s first goal.

However, Wood couldn’t block every shot. With 36 seconds to go, just when the Cats may have thought their shutout victory was sealed, Tribe forward Courtney Miles slid the ball past Wood, pushing the score to 2-1.

Miles notched the goal after receiving a pass in shallow right side of the box from defender Page Frantz just minutes after NU freshman forward Paige Miller missed a shot on William & Mary’s goal.

Moynihan called the goal “sloppy,” adding the team could not afford to have defensive lapses like that.

Looking ahead to practice this week and games on Thursday and Sunday against Cincinnati and Harvard, Moynihan said he hopes to work on improving the team’s play strong — especially toward the end of the season where he feels performances fall off.

“We just need to keep maturing,” Moynihan said. “But I thought we saw some real positive signs today.”