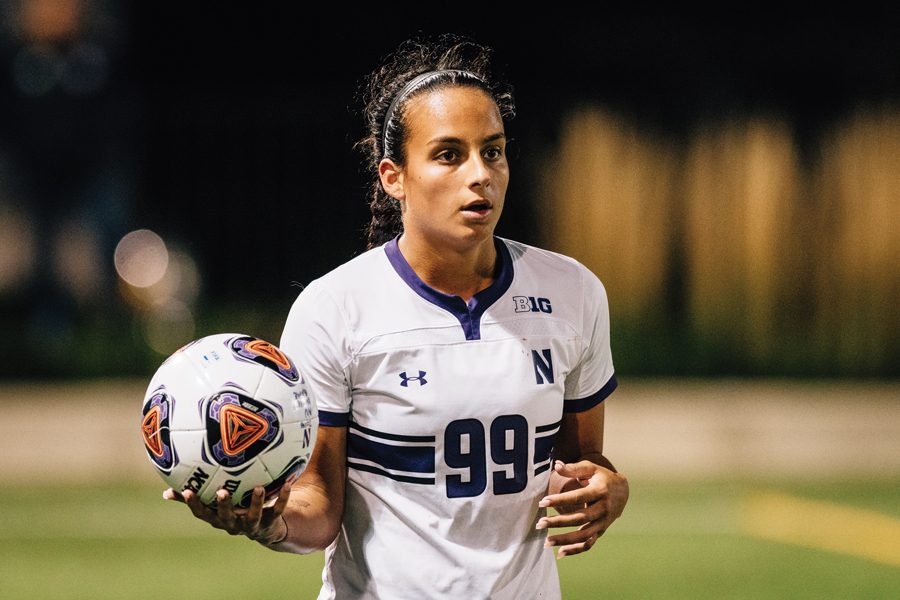 Sophomore Julietta Thron prepares to throw the ball. The defender said the back line is still getting used to playing with each other, since many of them are new teammates.

Despite a solid first half featuring close shots and steady ball possession, Northwestern fell 4-0 to Notre Dame on Sunday, keeping the Wildcats scoreless through their first two games of the season.

Though NU (0-2) held the game at 0-0 before halftime, the Fighting Irish (2-0) pulled away after the break, scoring four goals in a 13-minute span.

“I don’t know what it was,” coach Michael Moynihan said. “Notre Dame pretty much only had one shot the whole first half… and then all the sudden in the second half, we let them get it behind us all too often.”

The first goal came in the 48th minute when Fighting Irish forward Eva Hurm lobbed a corner kick straight into the net. Midfielder Luisa Delgado then knocked in another goal, putting Notre Dame up 2-0 a few minutes into the second half.

“I was just trying to make myself look big because I could tell she was trying to go to the far post,” Thron said. “It was hard because I wasn’t sure where to go, and I knew that Wood was there, so I was hesitant to do anything. In the end, (Hurm) shot it really far to my left, so I wasn’t able to get anything or in the way.”

Thron added that the defensive line is still getting used to playing with each other, since most of them hadn’t before.

“We relied on her,” he said. “She was a kind of a focal point of the attack.”

NU has yet to score a goal in its 2019 season, having lost 1-0 on Thursday to Southern Methodist prior to Sunday’s defeat.

Junior midfielder Regan Steigleder, who had a pair of shots in the first half, said she thinks the offense is almost there.

Moynihan said this week in practice, the Cats will have to focus on creating confidence.

Despite the outcome — which Moynihan said was “certainly not indicative” of the Cats’ skill — he remains optimistic in his team because of its tough performance in the first half.

“We had 45 minutes of good soccer going against a good team where I thought we were the better side,” he said. “There’s some encouragement in that.”

NU will look to secure its first win — and tab its first goal — of 2019 at Martin Stadium against Central Michigan on Thursday.