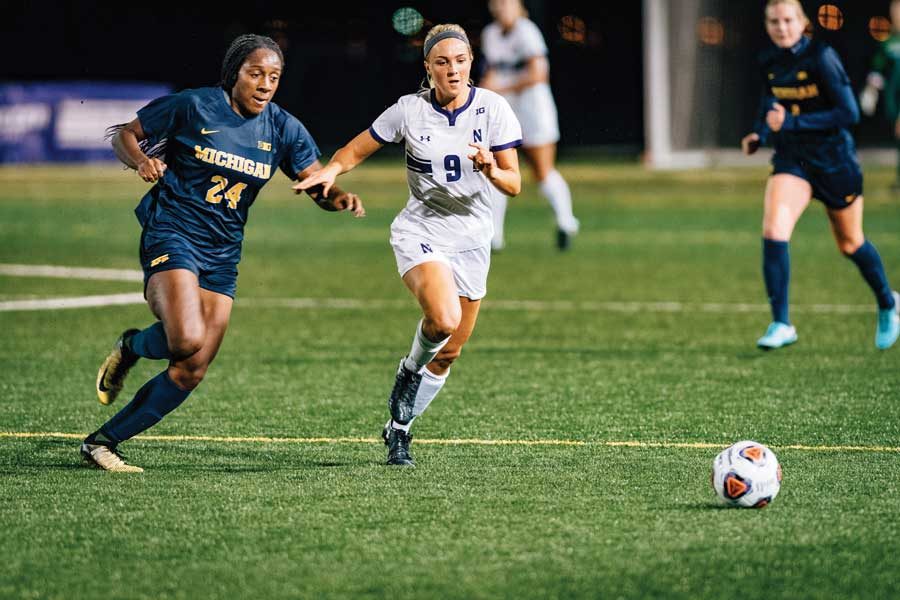 When Northwestern takes the field in its season opener against Southern Methodist on Thursday, the squad will look very different from last year’s.

The Wildcats graduated 10 seniors — including leading goal scorer Brenna Lovera and trusty center-backs Hannah Davison and Kayla Sharples — and in their places are a batch of new players “hungry” for victories, coach Michael Moynihan said.

Some of the newcomers include graduate student and defender Taylor Hallmon — a former national champion and two-time Atlantic Coast Conference champion with Florida State — and freshman forward Paige Miller, who tallied 33 goals and 17 assists in her high school career.

“We have a young group, and I think the mentality… is that we’re going to enter every game thinking we can win,” he said.

NU came short of winning big last year, missing the Big Ten Tournament and falling to North Carolina State in the first round of the NCAA Tournament. But with new players in all positions and an almost entirely new back line, the Cats have their eyes set on going far in both tournaments.

In order to do that, NU needs to improve on its offensive production, Moynihan said.

“Last year, we lost a lot of close games and tied some games (where) we were probably the dominant side, but we couldn’t find our way into the back of the net,” he said.

Moynihan added that important matchups this season will be against teams like Wisconsin and Penn State, who both open the season ranked in the top 20 nationwide.

However, Moynihan remains confident in the group’s ability to defeat them.

“Over the last few seasons, we’ve learned that any team in the Big Ten is capable of beating anybody else in any given date,” Moynihan said. “So within our conference play, it’s more a matter of going out and being consistent and performing well every day and not taking any games for granted.”

Luckily, the Cats will face these teams with key returners, like sophomore goalkeeper Mackenzie Wood — who earned several Big Ten accolades and compiled a .854 save percentage last year — and sophomore defender Julietta Thron, the only veteran in the back line.

Junior forward Kayleigh Stahlschmidt said despite the loss of last year’s seniors, the new players have already helped because of their talent and their ability to invigorate the team even more.

“They’re really bringing a lot of energy and confidence on the field already, both individually and as a group,” she said. “So far, we’re very close as a team — a lot more than last year. That’s something that grows every year, and the freshmen really make a big part of that.”