Your guide to Evanston: Beyond Downtown 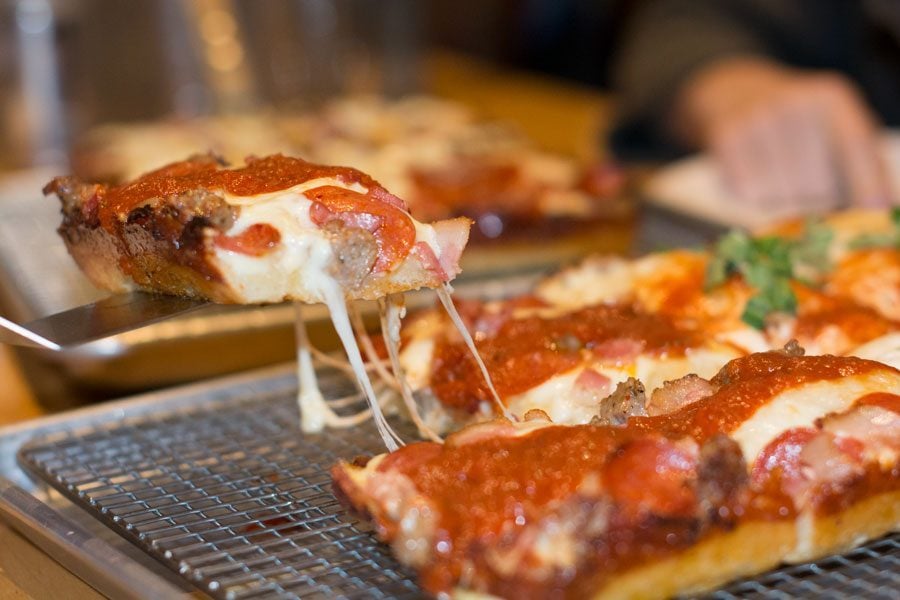 A slice of pizza from Union Squared Evanston, 1307 Chicago Ave. Similar to Sicilian-style, the thick-crust square pies are topped with melted brick cheese and then layered with toppings before and after helpings of sauce.

When you first move to Evanston and enter the downtown area, you may think you will want for nothing in your four short years here. There are many, many coffee shops, a movie theater, local bookstore, restaurants ranging from fast-casual mediterannean chain Naf Naf to upscale steakhouse Pete Miller’s and, of course, a Target.

But there is more to Evanston than this downtown area, which begins just past campus on Clark Street and stretches down to Lake Street. Admittedly, the city’s other commercial centers to the north and south are not as convenient, but they are worth a visit every so often. Make friends with the girl in your PA group who bragged about having her car on campus, or explore Evanston on foot before the Midwestern winter sets in.
North Evanston
Mustard’s Last Stand: It’s gameday. You’re hungry. Skip the overpriced stadium food and head to Mustard’s Last Stand, an iconic hot dog joint right next to Ryan Field that will satisfy you when you’re toeing the line between day-drunk and hungover. Get a Chicago dog with all the toppings and skip the ketchup in favor of mustard.

Foodstuffs: Foodstuffs, 2106 Central Street, is the place to go when you realize you haven’t eaten anything green in two weeks. The prices are steep, but worth it every so often for the salad bar offering every veggie you can imagine. If salads aren’t your thing, Foodstuffs also has a sandwich counter, bakery and prepared food section. When you get your salad, be sure to pick up a bag of the buttercream sandwich cookies or monster cookie bites.

Baha’i House of Worship: This spot is technically just outside of Evanston, in North Shore suburb Wilmette, but it is a must-do for anyone in the area. The temple — an unbelievable structure towering over the surrounding streets — is one of eight Baha’i temples in the world and also happens to be the largest and oldest-surviving. Its beauty really can’t be described in words, so grab your friends and take a stroll north or go for a quick run, if that’s your thing. (Bonus: the temple is right next to Gillson Park, where you’ll find serene walking paths with views of Lake Michigan and a dog beach)

Curt’s Cafe: Curt’s Cafe, 2922 Central St., is both a popular cafe with an extensive coffee and food menu and an Evanston institution embodying the activist spirit of the city. Curt’s employs young people who are living in at-risk situations and may find it difficult to find employment. Many of the student trainees have had contact with the judicial system, are homeless or have dropped out of school. When you need to get away from campus, head to Curt’s Cafe and sip a latte knowing you’re helping build the community around you.
South Evanston
Bagel Art Cafe: Bagel Art offers the best bagels in town, coming awfully close to the New York-style bagels I hope we can all agree can’t be beat. The shop on the corner of Dempster Street and Sherman Avenue is always bustling, filled with Evanstonians getting their coffee and bagel fix. Go with a classic everything with cream cheese, or try one of their more inventive bagel sandwich options (the Cinnamon Toast and Early Bird are solid picks).

Hoosier Mama’s: Hoosier Mama’s is a pie haven at 749 Chicago Ave. Their menu changes often and features a pie for everyone, from savory meat pies to quiches to the classic sweet pies grandma makes. When you need to study and can’t take the library any longer, hop on the free campus shuttle and camp out at Hoosier Mama’s. If you’re staying a while (you should), get both savory and sweet slices, plus a couple cups of coffee for good measure.

Mark II Lounge: The Mark II Lounge, affectionately known to Northwestern students as “the Deuce,” is a bar actually located on the North Side of Chicago, at 7436 N. Western Ave. I won’t say much more than this: the Deuce is the kind of cheap, slightly sticky dive bar that you probably won’t frequent much after freshman year but will remember far past your college years. If you don’t end up at the nearby IHOP at the end of the night, you did it wrong.

Union Squared Evanston: Everyone will tell you that when you move to the Chicagoland area, you have to try deep dish. And you should, but once you recover from the cheese-induced food coma, you should also go to Union Squared at 1307 Chicago Ave. for Detroit-style pizza. Similar to Sicilian-style, the thick-crust square pies are topped with melted brick cheese and then layered with toppings before and after helpings of sauce. Order the Detroit Michoacan pie.