Football Notebook: Thomas, Fisher push each other to be better leaders 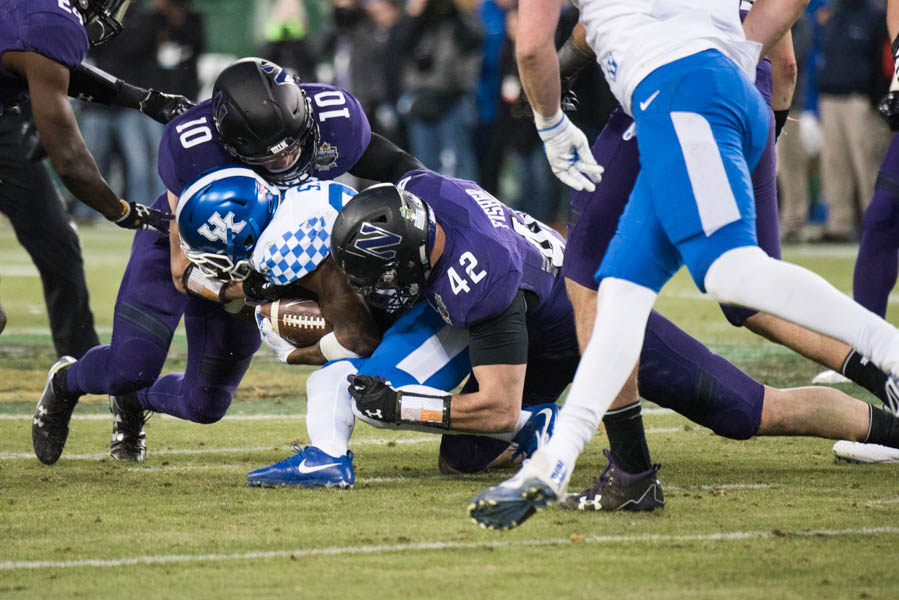 KENOSHA, Wis. — The offensive line always seems to be a question mark for Northwestern, and with only two starters returning from last season, this year is no different. But with the addition of fiery, competitive, “WWE wrestler” type Kurt Anderson, the line is starting to form a new identity.

As the only senior starter returning, Jared Thomas naturally stepped into a leadership role on the offensive line. But his impact is being felt beyond the trenches.

“Jared Thomas has done an absolutely phenomenal job,” coach Pat Fitzgerald said last week. “I think he is going to be one of the major leaders on our football team, not just our offensive line.”

On the defensive side of the ball, junior linebacker Paddy Fisher is the only returning captain from last year’s team, and he is expected to claim the honor again this fall.

Thomas and Fisher told The Daily they are pushing each other to be better players and better leaders. Despite playing on opposite sides of the ball, Thomas said the two have gotten closer over the summer and sit next to each other in team meetings.

Fisher called Thomas “our rock” on offense, and said the best part of their relationship is that the two are growing together.

“Jared is the guy that’s going to lead the guys on the offense,” Fisher said. “He’s touching the ball every snap. He’s touching it more than the quarterback, more than anybody else on offense.”

With college football commemorating its 150th anniversary this season, many colleges are wearing throwback uniforms to celebrate. Northwestern is no exception.

The Wildcats unveiled a fauxback — or retro-inspired — jersey Tuesday that the team will wear for its September 28 matchup at Wisconsin, who will also be wearing a fauxback uniform.

NU’s uniform is meant to look as though it is from the late 1800s, although an exact replication would obviously be impossible due to the changes in football regalia. It features a purple helmet with “NU” in white lettering, a white jersey with NU on the front and purple pants.

One of the coolest features is the gloves, which when held next to each other depict a fierce Cat logo the University used in the 1950s and 1960s.

Monday night, the team got their first look at the jerseys via defensive coordinator Mike Hankwitz. Hankwitz — who played for Michigan from 1966-1969 — dressed in full uniform, and even wore a leather helmet to help with his modeling.

“That guy is an absolute beast,” senior defensive back Joe Bergin said. “He looks like he could scrap it up right now… When he brought out the old leatherhead, that was pretty sweet.”

Abdur-Rahmaan Yaseen, a high school senior from Michigan who is committed to play wide receiver at NU, was ruled ineligible to play his final high school season by the Michigan High School Athletic Association.

According to Yaseen’s high-school coach, Alex Grignon, Yaseen took too many classes when he was home schooled in middle school, and the MHSAA moved him up an academic year, making him ineligible to play.

“I talked to Northwestern (Thursday), they said, ‘Hey, we’ve got his back, 100 percent. It’s fine with us, it’s just unfortunate he doesn’t get to play this fall, doesn’t get to experience his senior year,’” Grignon told The Detroit News.

Northwestern cannot comment on the situation due to NCAA rules.