Football: Inside the 2019 Northwestern QB competition 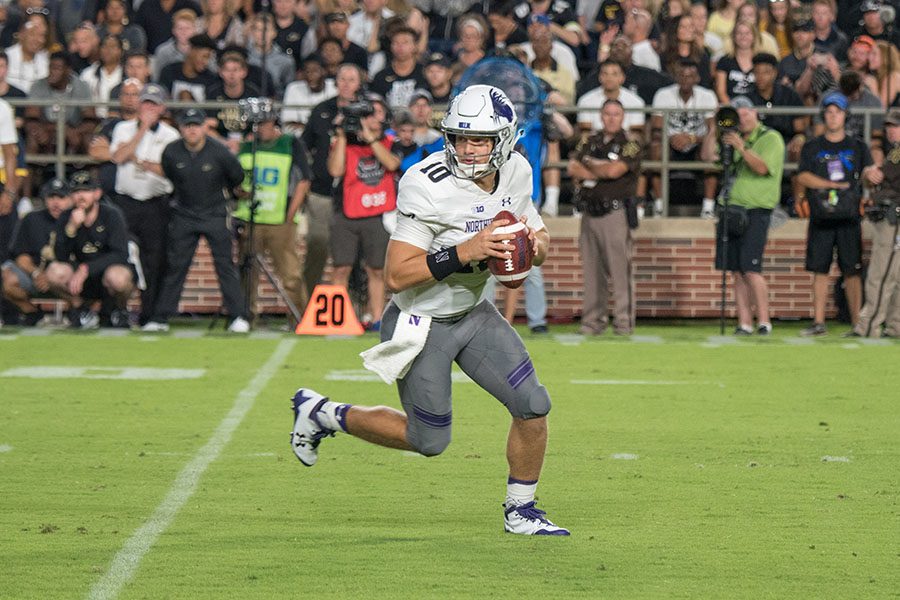 TJ Green rolls out on a pass play. The senior is competing for the starting quarterback spot.

The last time Northwestern had a quarterback competition four years ago, the Wildcats were in a very similar situation to the one they face now.

In 2015, NU had to replace Trevor Siemian, who was selected in the seventh round of the NFL Draft, and the new quarterback had an immediate challenge in Pac-12 heavyweight Stanford. Clayton Thorson, then a redshirt freshman, won the competition over senior Zack Oliver — who had played in place of Siemian when the future NFL starter was injured — and sophomore Matt Alviti.

Now, Thorson is on the Philadelphia Eagles, and whoever takes over for the Cats legend will also have to face Stanford in his first test. Clemson transfer Hunter Johnson, who was once the No. 1 quarterback recruit in the country, and senior TJ Green, the son of two-time Pro Bowler Trent Green, are at the top of the list. Junior Aidan Smith and sophomore Andrew Marty are also in contention, but the odds either of them is under center against the Cardinal are slim.

Coach Pat Fitzgerald said the team has a plan, and reminded the media Wednesday that this isn’t his and offensive coordinator Mick McCall’s first rodeo.

“You look back at our track record — Mick and I — we’ve gone through this now a number of times where we’ve had quarterback graduation and now we have quarterback change,” Fitzgerald said. “We’ve handled it maybe as well as anybody as I think a head coach and coordinator has handled it in college football.”

What the exact plan entails is unsure, but it does allow each quarterback to get reps with the projected starters.

“I really like the way that we do it,” Fitzgerald said. “It gives every guy an opportunity. And it also gives them an opportunity to get better because we never know when we are going to need them.”

Fitzgerald stressed the need for more than one quarterback in today’s college football landscape. The Cats have seen that firsthand over the past few seasons, whether it was Alviti during the 2017 Music City Bowl or Green at the start of last season.

He cited Alviti’s performance in the bowl win as an example of the importance of giving all the quarterbacks reps with the starters early in the process.

McCall and senior wide receiver Bennett Skowronek both told The Daily the quarterbacks have been doing a good job getting the ball out of their hands. But, what seems to have left a big impression on everyone about the competition is the support the quarterbacks show each other.

“The best part of our quarterback room right now is I think that group is really each other’s biggest fans,” Fitzgerald said. “They’re really trying to help each other when they come out after a rep. They’re being coaches on the field.”

Fitzgerald said they are doing a terrific job lifting each other up, and have been getting better each day. He said that attitude is “really encouraging not only for the opener, for the year, but for the big picture of the program.” Johnson said the chemistry and love the group has for each other is not always seen in QB rooms, and that each member has grown from their relationship with each other.

Junior wide receiver Riley Lees said the quarterbacks are not afraid to help each other out, which he called “a weird way of leadership, but it’s a good thing.” He added they have been very selfless and that the competition has been healthy.

“Knowledge is everything. It’s power.”

Fitzgerald spent the first part of his nearly 28-minute long press conference Wednesday talking about the competition. He only once mentioned a division in a skill within the group.

With three weeks before kickoff at Stanford, it seems the only aspect of the competition where there is separation — or at least separation acknowledged publicly — is in knowledge of the playbook.

“I feel very confident in what I am doing on the field, which allows me to play a lot faster. And I think that is a huge part of football is being able to play fast,” Green said. “The more you know the playbook, the more you can see defensive schemes, it will slow things down so you can see what’s going on.”

Green said he knows the system like “the back of my hand,” but added that Johnson has been doing a really good job learning over the past few months.

The fact that Green is ahead of Johnson in his knowledge of the playbook is not surprising. Green is in his fifth year with the program. Johnson is in his second, and spent last season as the scout team quarterback. That meant preparing to be “all these different quarterbacks from all over the Big Ten” every week, and not to be a Cats quarterback.

For the Indiana native, watching film and getting “mental reps” are very important in his development in learning the offense. The sophomore said he is watching tape of Thorson, the other quarterbacks and himself.

Learning a new playbook is nothing new for Johnson — WildcatReport’s Louie Vaccher reported that Johnson has learned six new offenses since entering high school. Johnson told The Daily that his system knowledge has been his biggest improvement and it continues to be the thing he looks to improve the most.

“Overall knowledge of the playbook is just something Coach McCall really stresses to all of us,” Johnson said. “It’s one of the things that he always says to us: the guy that doesn’t turn the ball over, the guy that knows what he’s doing and the guy that’s gonna step up and lead, that’s gonna be the guy that gives us the best chance to win.”

McCall told The Daily that “nobody’s 100 percent right now” in terms of playbook understanding, but said those who know the playbook best have the best chance to win the game. “Knowledge is everything,” he said. “It’s power.”

McCall said Johnson is very capable of coming on and becoming one of the best at knowing the playbook. He did add that Johnson does probably have to improve in that area.

“If he doesn’t know the playbook, he can’t play in our offense,” McCall told The Daily. “It’s just bottom line.”

“It’s been early or it’s been really, really late.”

For the group as a whole, McCall said their consistency must improve, and that it will be a main component in selecting a starter.

“Consistency is the biggest thing that they got to get better at,” McCall said. “The guy that’s the most consistent will win the job.”

Fitzgerald gave a few criteria that they will use to select the starter.

“First of all, the guy that can execute the offense,” Fitzgerald said. “A guy that can take care of the football. A guy that when he walks on the field, the other 10 guys on offense, they believe in him. They believe he is going to lead us down to being consistent from a standpoint of offensive execution. And then a guy that we believe is going to be able to help lead us to a championship. A guy that from a standpoint the whole team believes in.”

Like last season, the starter is not expected to be announced before the first game of the season. The moment the NU offense steps on the field will be the first time the world knows who won the competition. And, as last year’s rotation showed, it might take a few drives for the world to be sure who is the starter.

McCall said he does know when a starter will be chosen. Historically, he said, every time there has been a competition, “it’s been early, or it’s been really, really late.” McCall did mention the possibility of a rotation.

The players on the team know the decision will not be disclosed to them soon. Lees laughed when asked when he expects the team to know who is starting.