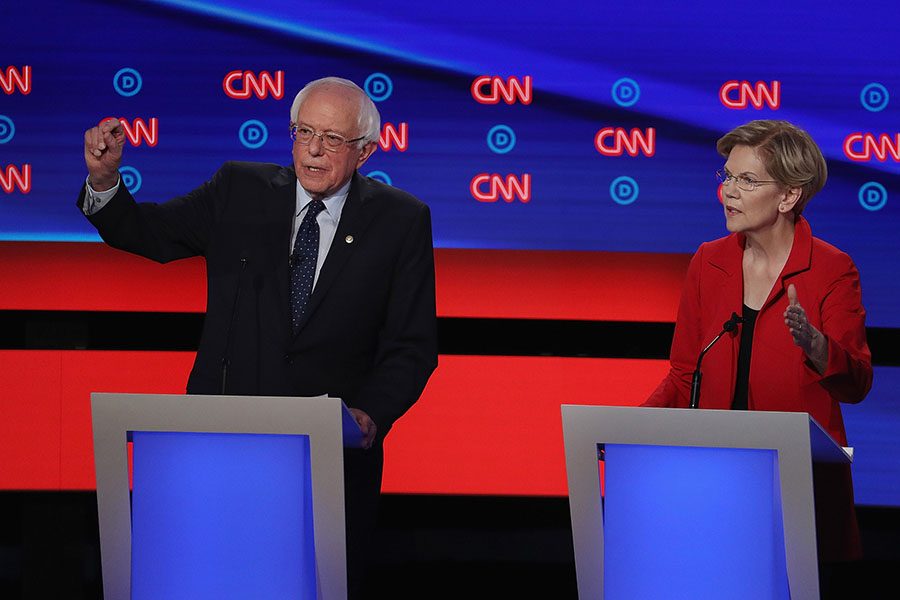 In the second round of the Democratic presidential debates, 10 candidates went head-to-head in Detroit, with the clash between progressive and moderate proposals taking center stage.

Although the debate focused considerably on the fight for the ideological future of the Democratic party, the presidential hopefuls also confronted the issue of whether large progressive policies are suitable for the general election against President Trump next year.

Whereas the more progressive candidates favored larger idealistic policies, the more moderate presidential contenders argued against what they called “wishlist politics.” Notably, Warren responded to the issue of electability by saying, “I don’t understand why anybody goes to all the trouble of running for president of the United States just to talk about what we really can’t do and shouldn’t fight for.”

With the field most likely being cut in half by September, political pundits noted the candidates’ performances would be critical to remaining in the race. While the first half of the debate was dominated by healthcare, the candidates also addressed issues like the climate crisis, gun reform, race, college debt and age.

Climate crisis
Delaney was the first to tackle the question of climate change during Tuesday’s debate. The former congressman, in contrast with the more progressive candidates, does not support the Green New Deal.

“I put a price on carbon, take all the money, give it back to the American people in a dividend. That was introduced on a bipartisan basis. It’s the only significant bipartisan climate bill in the congress,” Delaney said.

Former Governor John Hickenlooper also vocalized his concern with the large scope of the Green New Deal and its guarantee for a public job for every American who wants one.

In contrast to Delaney and Hickenlooper’s concerns, Warren, who co-sponsored the Green New Deal, responded with her own climate proposal.

“Look, I put a real policy on the table to create 1.2 million new jobs in green manufacturing,” Warren said. “There’s going to be a $23 trillion worldwide market for this. This could revitalize huge cities across this country, and no one wants to talk about it.”

Sanders also provided support toward larger climate initiatives. “I get a little bit tired of Democrats afraid of big ideas,” Sanders said. “Republicans are not afraid of big ideas. They could give a trillion dollars in tax breaks to billionaires and profitable corporations.”

Gun reform
This weekend, there were three mass shootings, including one at a food festival in Gilroy, California that left three dead and 12 injured. When questioned on how to solve this epidemic of gun violence, the debate’s youngest candidate, South Bend Mayor Pete Buttigieg said he supported common-sense solutions.

Buttigieg explained that universal background checks, red flag laws and an assault weapons ban are measures most people recognize as necessary — yet they haven’t been delivered due to Washington’s incapability.

In contrast to Buttigieg’s proposals, Klobuchar positioned the National Rifle Association as the main hurdle to comprehensive gun reform.

“After Parkland, those students just didn’t march,” Klobuchar said. “They passed universal background checks. And now that bill is sitting on Mitch McConnell’s doorstep because of the money and the power of the NRA.”

As president, Klobuchar said she would “not fold” and instead take on the organization.

Similarly, former Rep. Beto O’Rourke said the influence and power of the National Rifle association prevents the Center for Disease Control from studying gun violence. Consequently, O’Rourke said he wants to ban political action committee contributions to any member of Congress or any candidate for federal office.

The Racial Divide
Despite the racially diverse Democratic field, every candidate participating in last night’s debate was white. Candidates were asked about race and rising tensions in America.

Many candidates spoke of a lack of economic opportunity for black Americans — Buttigieg vowed to invest in red-lined neighborhoods and black entrepreneurs, Warren reiterated her promise to put $50 billion into HBCUs, and Klobuchar advocated for better childcare, education and teacher compensation.

O’Rourke brought the legacy of slavery to the debate floor. In order to address the racial disparities between black and white Americans, the former congressman stated that as president he would sign into law Rep. Sheila Jackson Lee’s reparations bill, which would form a commission to study the issue of reparations — but does not specifically call for black Americans to receive payments.

Moderators then turned to author Marianne Williamson, noting that while several of her opponents support the commission, she has instead called for up to $500 billion in governmental financial assistance for the descendants of slaves.

She responded by saying that it was not “financial assistance,” but a “debt that is owed.”

“We need to recognize that when it comes to the economic gap between blacks and whites in America, it does come from a great injustice that has never been dealt with,” Williamson said. “That great injustice has had to do with the fact that there was 250 years of slavery followed by another hundred years of domestic terrorism.”

Sanders, who has opposed the use of cash payments to address issues of institutionalized racism and racial tension, chose instead to throw his support behind legislation that targets federal funds at persistent poverty communities. He also highlighted his “Thurgood Marshall Plan,” which focuses on ending the growth of segregated schools in America, tripling the funding for Title I schools and ensuring teachers made at least $60,000 a year.

College Debt
Despite their differing political ideologies, all 10 candidates echoed the same sentiment — they believe they can defeat Trump in the November election. While multiple plans to do so have been proposed over the past three debates, Sanders speculated he can achieve this feat by promising free college and no more student debt.

“To win this election… we need to have a campaign of energy and excitement and of vision,” Sanders said. “We need to bring millions of young people into the political process in a way that we have never seen by, among other things, making public colleges and universities tuition-free and canceling student debt.”

Warren proposed eliminating college loan debt (for 95 percent of people who have it) as a tool as well, specifically for aiding the closure of the black-white wealth gap in America.

The debate over how to ease the burden of student debt was one of the most divisive of the night. Buttegieg noted he was in favor of increasing Pell grants, compelling states to shoulder more of the financial burden and holding for-profit colleges accountable over the more progressive plans of Sanders, Warren and Williamson.

Klobuchar leaned away from eliminating loan debt altogether as well, instead proposing that she would allow those with debt to refinance it at a better rate and improve student loan repayment programs, especially for teachers and those who go into professions with a lack of labor. Klobuchar said she did not want Americans to have to pay for wealthy students to go to college for free, when the focus should be on low- and middle-income students.

“I want to make it easier for kids to go to college,” Klobachur said. “And I think we do it by focusing our resources on the people that need it most.”

Age
A running theme of the past three debates has been age — specifically, whether elder candidates should “pass the torch” to their more junior opponents who may have a better shot at capturing the youth vote.

Last night’s debate was no exception, featuring for the first time the youngest candidate in the field, 37-year-old Buttegieg, against the oldest candidate, 77-year-old Sanders.

When both candidates were asked whether voters should take age into consideration when selecting who they want to run against 73-year-old Trump, they each had the same answer: it’s a question of vision.

“I do think it matters that we have a new generation of leaders stepping up around the world,” Buttegieg said. “This is the kind of trend America might be leading, instead of following, but only if it’s actually backed by the right vision. We cannot have a vision that amounts to back to normal, because the only reason we got this president is that normal didn’t work.”