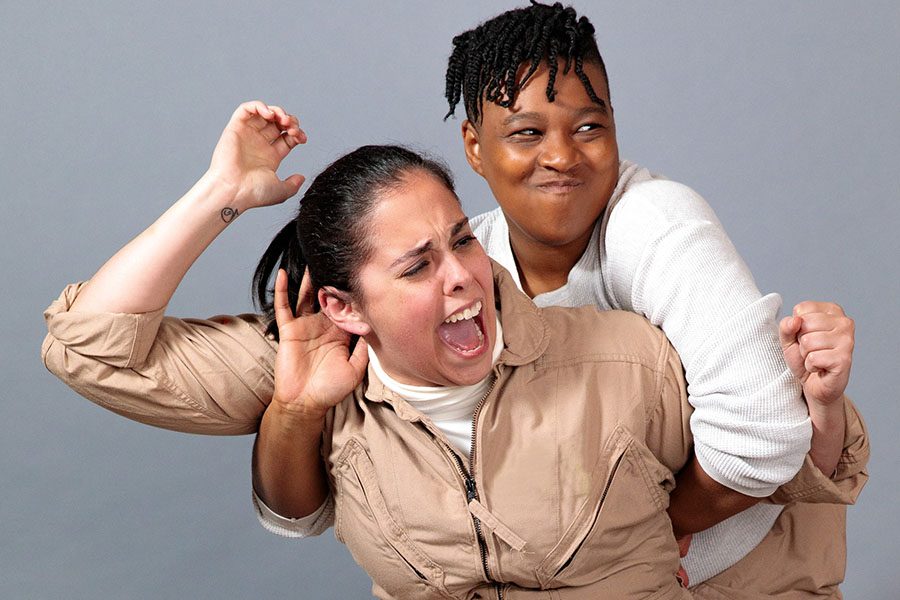 Actors from Women of 4G, opening August 1 at The Factory Theater, perform a fight.

Earlier this year, the first all-female spacewalk was canceled because NASA didn’t have enough space suits to fit the women. But in the fictional world of “Women of 4G,” which takes place 75 years in the future, an all-female space crew is possible.

The show opens August 1 at The Factory Theater and is this summer’s Babes With Blades production. Babes With Blades is a Chicago-based theater company focused on creating stage combat-based roles for women. The company was founded in 1997 by Dawn “Sam” Alden, who saw a lack of those roles and wanted to make a space for them. This launched the Fighting Words Program where three scripts annually are discussed and fine-tuned.

The “Women of 4G” script written by Amy Tofte came from this process and the company’s artistic director, Hayley Rice, felt this sci-fi script fit what the company stood for.

“This one really felt like she got what we do and we’re getting into individual, interesting, strong, complex women in this sci-fi environment,” Rice said. “And we’re like, ‘Yeah, we’re going to give this a full production.’”

“Women of 4G” follows an all-female space crew on the space vessel 4G after their male captain dies on their mission. While it begins as a murder mystery, it becomes much more than that and becomes an exploration of legacy and responsibility.

Rice said the show features women of ages 22 to 65 who all play complex characters whose identities are independent of their relationships with men. She said the show also isn’t focused on aliens, but is a much more intimate show that focuses on issues women deal with today.
While the show’s premise isn’t as crazy or fantasized as movies like “E.T.” or “Predator,” the show still creates an interstellar feel for the audience.

Recent Communications graduate Jessica Baldinger is the set designer for the show and has been innovative in creating a set resembling a spaceship and creating a balance between realism and fantasy.

“The actors and the director wanted some physical things to interact with like controls of the spaceship,” Baldinger said. “There was talk about putting monitors on top of these abstract forms, but eventually we decided against that because we didn’t want to disrupt the suspension of disbelief that we’ve gotten so far.”

While at NU, Baldinger set designed on many student productions and found that her experience has helped her significantly on the show. She said she has enjoyed finding new ways to collaborate with people that she hasn’t been working with for years.

Sound designer Hannah Foerschler (Communication ’19) has also been able to explore new things with this show to develop sounds of space.

“There’s no way to know what space sounds like,” Foerschler said. “There are no go-to space sounds until you find a recording that you can manipulate into something you think sounds like space and that other people are convinced sound like space.”

Foerschler has been sound designing since she was an undergraduate student at Kenyon College. Babes With Blades is the first all-female company she’s encountered in Chicago and said the work environment has been great because everyone has the same mindset.

“We’re all women doing this show with a lot of combat and a lot of tech and we’re all getting it done,” she said.