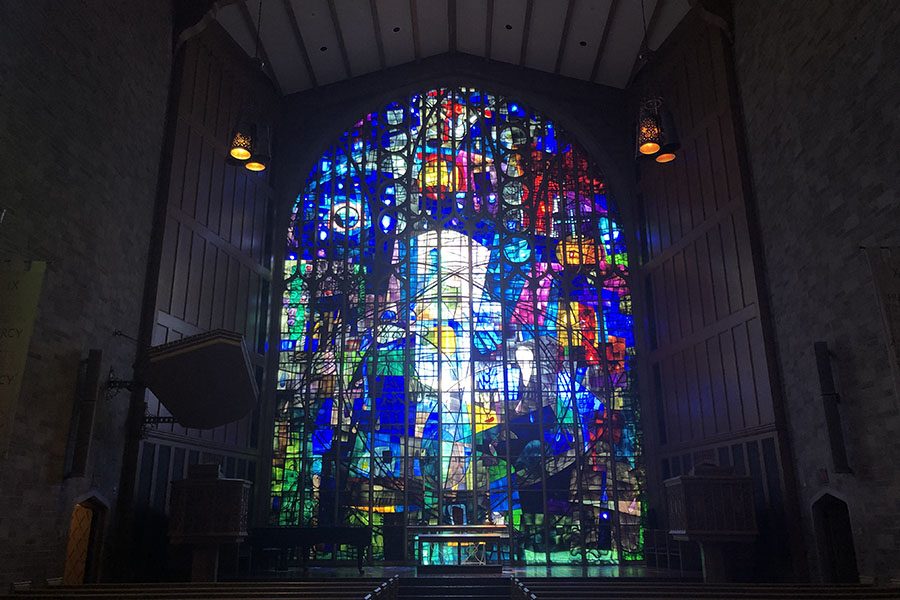 The chancel window behind the altar of the Alice Millar Chapel, designed by Benoit Gilsoul. The window represents creation, redemption and triumph.

At the end of 1961, artist Benoît Gilsoul and his family packed up their belongings and moved from Belgium to Queens. Although he spoke little English, he began to design for Willet Stained Glass Studios of Philadelphia with the help of his wife, who would translate for him into their native language, French. A year later, he began to work on the stained glass windows for the Alice Millar Chapel at Northwestern University.

Over 50 years later, the multicolored windows in the 700-seat chapel continue to hold a lasting impression on the people who visit.

“What’s fascinating about them is that they’re different all the time,” said Eric Budzynski, the associate for Religious Life & Chapel Music at the Alice Millar Chapel. “I’m always amazed at how different they are depending on the season, time of day, if it’s a cloudy day, a sunny day, a rainy day. There’s always something new to find in these windows and a new way to be inspired by them.”

Broad instructions were given to Gilsoul: to create something new that would connect the Alice Millar Chapel to Northwestern and Evanston. It took two years to complete the windows, said Gilsoul’s daughter, Mireille Gisoul.

The stained glass process took a long time, despite the advancement of glass design techniques in the 1960s. One evolution was autonomous panels — panels created by a single artist that are viewed as aesthetic fine art over functional decorative art, which serves a functional purpose, according to the website of the Stained Glass Association of America. For the campus chapel, this artist was Gilsoul.

“The committee of the Alice Millar Chapel gives the themes for the windows, then my father had to do research,” Mireille said. “He had to do the sketches, which took hours and days because he had to get the brushes, watercolors, cartons, et cetera.”

Gilsoul moved to America after he visited on a grant to study art and fell in love with the country. His main desire was to paint, his daughter said, but he designed stained glass to put food on the table.

The chapel features a more modern design than the typical chapel stained glass display of biblical images, so they generated controversial attention when they were finished in 1964. For example, the panels have jellyfish on them — instead of featuring an image of Jesus on the cross. At the time, churches were spending less money on the buildings while “hippies” gave the art of stained glass a more colorful and secular home, according to the website of the Stained Glass Association of America.

The windows bring together spirituality and education on campus, said Tiffany Song, a graduate assistant in the Office of Student Engagement, who works with the Chapel. Gilsoul used new techniques and designs to reflect Northwestern education while paying homage to the Bible — Song said she sees the symbolism behind education itself as a parallel to the windows’ history.

“Education as a whole wants things to be new or different while within the frame of things that are familiar or traditional,” Song said.

The floor-to-ceiling chancel window at the front of the chapel displays the traditional biblical theology themes of creation, redemption and triumph. The lower third of the window shows the creation of the waters, including images of jellyfish and other marine life. The center third depicts the story of redemption, and the upper third presents the creation of the heavens.

The side windows display images associated with the University alongside the chancel window. Black arcs around the windows create a bridge between Northwestern and the rest of the world, and the images mix Biblical and modern academic symbolism.

“You can see Bunsen burners and test tubes, so any student that comes in that’s studying chemistry will have this connection right away,” Budzynski said. “The question is: what does that mean to the entire community, and what’s the place of religion and spirituality in being a chemist? Can you be a spiritual chemist?”

The stained glass windows serve as a backdrop to the events that go on in the chapel, Budzynski said. They have seen baptisms, weddings and funerals. Celebrations of life and death. Tears of joy and sadness.

“All of this is serving as this silent but really colorful and boisterous witness to all the things that happened within the life of this community and this university,” Budzynski said. “I wonder for future generations or even myself, how people will continue to respond.”