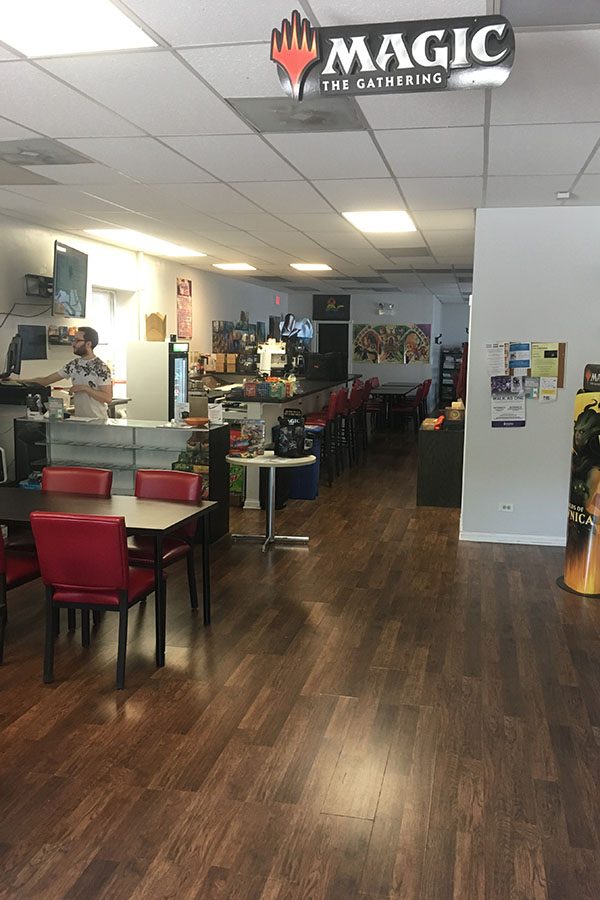 On her morning walk home from the Evanston Farmers’ Market in April 2015, avid gamer Jessica Gamba wondered why dice and board games were strewn among deconstructed furniture in an empty storefront. After learning the space was home to the soon-to-be opened Evanston Games and Cafe, she said she waited for weeks to knock on its door the moment it opened the next month.

She has been a loyal fan of the store ever since.

“This place has a really incredible community,” Gamba said. “It has been that way since it first opened.”

With nearly 100 board games available for rent for free, and weekly tournaments based on trading card games such as “Magic: The Gathering,” Evanston Games and Cafe has something for all kinds of Evanston residents, Gamba said.

“I am more of an introvert,” Levine said. “I have been in Chicago since October, but being that I don’t know many people in the city, I am slowly building up a friend group here.”

Eli Klein, the current owner of Evanston Games and Cafe, said he hoped customers like Levine can find comfort in an intimate setting that promotes their mutual interests.

“I think it is a great way for people of different backgrounds and experiences to interact and have a shared language to learn about each other,” Klein said. “You can come and be yourself.”

Klein also feels Evanston Games and Cafe is a means of ensuring board games do not become antiques. He emphasized the importance of supporting the next generation of gamers.

When he took ownership of Evanston Games and Cafe in January 2017 from his college roommate, the store was suffering due to poor business management, Klein said. He hired an employee quickly and raised money through increased advertising.

Now sustainable, Evanston Games and Cafe hosts a variety of tournaments for all skill levels. Friday night and Saturday afternoon tournaments are mainly for new players while Wednesday nights tend to be for more experienced players.

With as many as 30 people coming to participate in any given tournament, Klein said he recently has had trouble fitting everyone in the space.

Patrick Eastman, a clerk at the store, attributes the rising popularity of the store to the belief that board games give gamers a comforting blast from the past.

Eastman also believes board games give people the chance to enjoy themselves.

“Life’s difficult, and it’s nice to have something that makes you able to pull away, even (for) a moment,” he said. “Distraction makes life a little more bearable.”