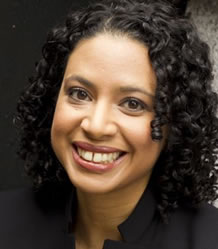 Communication Prof. Masi Asare launched “Mirror of Most Value: A Ms. Marvel Play,” in June as part of a trio of one-act Marvel plays intended for high school audiences. Asare’s play — which she first pitched in December 2017 — follows Kamala Khan, a Muslim teenager in Jersey City, New Jersey, who is secretly the superhero Ms. Marvel. In the play, Kamala writes fanfiction about Ms. Marvel but gets caught up in her fame, or lack thereof, and must learn how to accept her imperfections.

The other two plays in the trio are Christian Borle’s “Hammered: A Thor & Loki Play,” and Karen Zacharías’ “Squirrel Girl Goes to College: A Squirrel Girl Play.” All three are based on Marvel characters.

The Daily spoke with Asare to hear about her impressions of her play and the writing process.

This interview has been lightly edited and condensed for clarity.

The Daily: What made you want to write about Ms. Marvel?
Asare: She’s an amazing character. She isn’t as well known — she’s pretty new — but it’s an amazing comic. Her story is about coming to terms with her identity and really understanding how that’s part of her superpower, and to write about an immigrant character specifically in this moment — it’s an exciting project to put my name behind. But also, she’s just a great character. She’s really funny, she’s always doing hilarious stuff, and so to get to dive into that was really exciting.

The Daily: What was it like watching your play on the stage a few times?
Asare: It was really fun. They videotaped all the productions, and I was able to see one in person. I learned a lot. The thing that I had to fix actually was that there was not enough time to allow her to do her costume changes when she’s in her superhero outfit. That’s just a really practical thing that came about. Some students (also) gave feedback, which was really helpful. One thing that moved me the most was students who said ‘this really reminds me of my family,’ or ‘I feel well represented on stage,’ specifically students who came from Muslim families, who came from South Asian families. That was some of the most rewarding feedback I got.

The Daily: How did your background help inform your writing, if at all?
Asare: I don’t come from a South Asian background. I’m mixed race — my dad’s from West Africa and my mom’s white American, so I definitely relate to the immigrant background. A number of members of my family are first-generation immigrants, so that piece of it definitely resonated. I will say that my in-laws are Muslim, so I myself am not Muslim, but I have some windows into that world. There’s one character in the play who wears a hijab, and it was really important to me that for actors who do not wear a hijab in their regular life, that they consult a Muslim woman about how to do that respectfully, and that was another thing that was well-honored in all the productions I saw.

The Daily: What do you like most about the play?
Asare: There’s a speech at the end that I really love. Kamala’s trying to be better known as a superhero and the fanfics she’s telling are coming into conflict with other kids at her school, so she’s having a hard time getting fans. Then right toward the end, after she’s been able to be honest about who she is, she gets a fan. I really love her fangirl’s speech (and) what it really says about how we don’t have to appear perfect all the time. And actually what the fangirl likes about Kamala is that she’s ordinary and relatable, and that’s a way to be a hero, too.

The Daily: Is there anything from this experience that you’re going to bring back to your classes at Northwestern?
Asare: Being a practicing artist is important in teaching and encouraging the next generation of students to write for the theater because it means that one has a certain humility. I face the blank page every day, and I know how scary it is, and I know how much one has to fight one’s own insecurities. And I know how much work it is to rewrite things. I think hopefully it will help me continue to bring some compassion to my students.