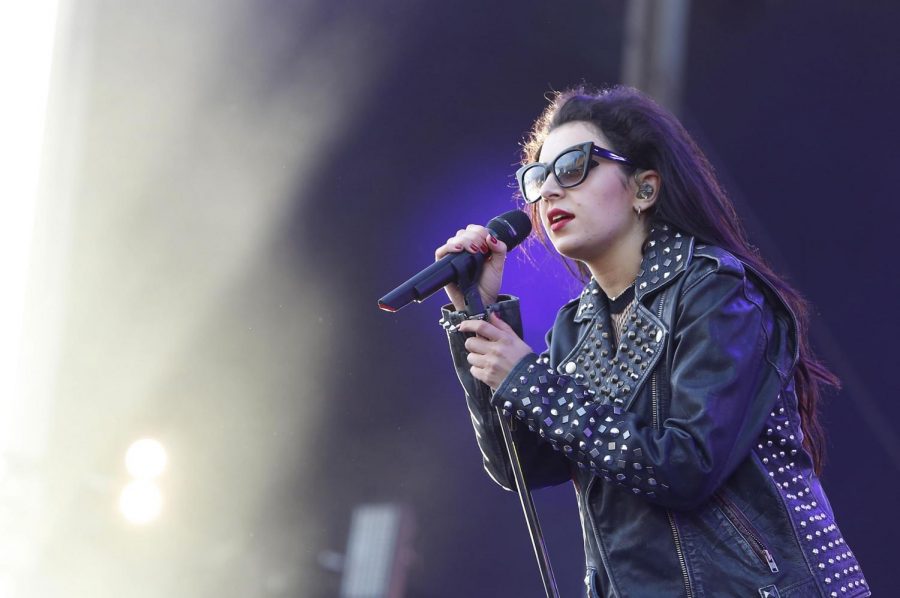 Charli XCX performs in 2015. Pitchfork Music Festival will feature Charli XCX and many other artists from a variety of genres.

Pitchfork Music Festival, a three-day music festival that runs from July 19-21, is gaining popularity in Chicago as a counterpart to the established and popular Lollapalooza, which will occur just two weeks later. This year, the Pitchfork lineup boasts several well-known headliners as well as up-and-coming artists from a variety of genres. Here’s who to see if you’re planning on heading to Union Park this weekend.

Sister trio HAIM headlines the first day, with Mavis Staples, Pusha T and Valee adding sets. Staples, a Chicago-born legendary gospel singer, released her 12th studio album, “We Get By,” at the end of May. Staples performs on the Red Stage at 7:25 p.m.

Valee, a rapper also originally from Chicago, dropped a surprise EP, “Runnin’ Rich,” in June and is signed to Kanye West’s G.O.O.D. Music label. He will play the Red Stage earlier in the day, at 3:20.

Be sure to check out 22-year-old pop-rock artist Soccer Mommy — whose hazy single “Your Dog” has garnered over 12 million Spotify streams. She is scheduled to play the Blue Stage at 6:30 p.m. Rapper Rico Nasty, a member of XXL’s 2019 freshman class, plays the Blue Stage at 2:45 p.m. Her set will undoubtedly feature heavy-hitting yet undeniably femme tracks from April’s “Anger Management,” a joint release with producer Kenny Beats. Rico Nasty played Coachella earlier this year.

For more Chicago sound, don’t miss Grapetooth, a raucous duo who saw the spotlight for the first time with their 2018 self-titled debut. They’re set to perform on the Blue Stage at 4 p.m.

The Isley Brothers, known for “Twist and Shout” and “It’s Your Thing,” headline Saturday for their 60th birthday celebration, along with Belle & Sebastian and Stereolab. Stereolab’s Pitchfork set will be their first U.S. performance in 11 years.

Jeremih, also originally from Chicago, plays the Blue Stage at 7:45 p.m. He has seen large-scale chart success in the past few years with his rhythmic R&B and hip-hop tracks. Disco rap-influenced artist Ric Wilson’s career began with Young Chicago Authors, a program whose open mics famously helped start the career of Chance the Rapper. Wilson dropped his most recent single, “Yellowbrick,” in March ahead of his first-ever tour. Wilson performs on the Red Stage at 1:45 p.m.

Other artists to check out: Lala Lala, the indie rock project from Chicago-based songwriter Lillie West, and Amber Mark, a soul-pop artist who first saw success last year with songs like “Love Me Right.” Lala Lala plays the Green Stage at 1 p.m., and Mark plays the Blue Stage at 5:15 p.m.

Robyn and Charli XCX headline the festival’s closing day, joined by Chicago indie rock band Whitney. Whitney performed at Northwestern’s Dillo Day in 2018, and have succeeded with country-infused ballads like “No Woman.” The band released their achingly sentimental new single, “Valleys (My Love),” from their sophomore record, “Forever Turned Around,” on Tuesday. The band will play the Green Stage at 6:15 p.m.

Tasha, a rising pop and R&B artist, poet and Chicago native, will perform on the Blue Stage at 2:45 p.m., featuring softened and sweet tracks from her 2018 debut, “Alone at Last.” Sunday also features Dreezy, who grew up on the South Side of Chicago — a place that, according to her website bio, helped her develop her writing skills in rap music. Dreezy dropped “Big Dreez,” her most recent studio album, earlier this year. She performs on the Green Stage at 1 p.m.

The final day of the festival features several artists who are rising in popularity, especially among younger demographics. This includes Clairo and Snail Mail, two 20-year-old female artists whose first few records have been shaking up the music scene. Clairo’s mellow yet up-tempo track “Pretty Girl,” which she released in 2017, has over 60 million streams on Spotify. The indie pop artist is gearing up for her debut album, “Immunity,” to be released August 2. Snail Mail, a punk-influenced artist, dropped her first album, “Lush,” in 2018. Clairo plays the Green Stage at 4:15 p.m., and Snail Mail plays the Blue Stage at 7:45 p.m.