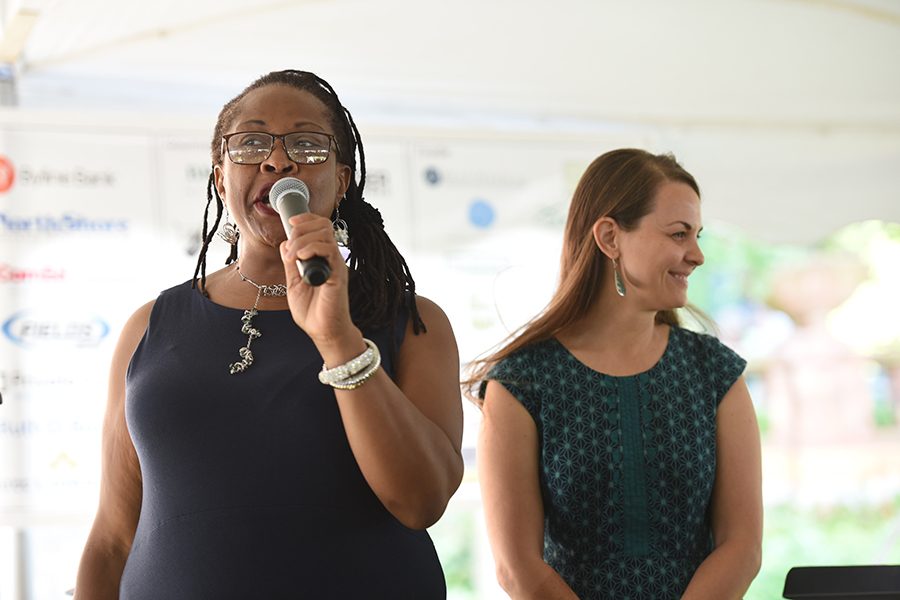 Inside a large white tent packed full of Evanston residents and visitors, the sound of laughter combined with the steady beat of a drum. Onlookers feasted on a host of miniature foods as loud music saturated the crowd.

The fifth annual Taste of Evanston drew a crowd of over 500 residents to the lawn of the historic Charles Gates Dawes House Sunday evening. Hosted by the Evanston Lighthouse Rotary Club, the event featured 40 of Evanston’s most popular restaurants, breweries and wine stores.

The majority of the funds from the event will go toward Connections for the Homeless and Reba Place Development Corporation — two local organizations that help combat homelessness in Evanston. A portion of the funds will also support the Evanston Lighthouse Rotary Club’s charitable efforts.

Ihejirika, a resident of Evanston herself, told The Daily that she was approached to emcee the Taste because organizers knew she cared about the issue of homelessness and knew its importance to the local community.

“The proceeds will be beneficial to Evanston overall,” Ihejirika said. “As part of putting on this program, we wanted to help everyone and actively see the impact on people’s lives.”

Between numbers from the jazz band, Ihejirika introduced Evanston residents Abigail Stone and Courtney (whose last name she wished to remain anonymous) on behalf of Connections for the Homeless and Reba Development Corporation, respectively.

While music blared in the background and residents snacked on everything from goat cheese gelato to pulled pork on crostini, Courtney described how she used to live in Evanston with her children and husband, who was in graduate school. However, following her divorce, she found herself unable to find affordable housing.

“I had a lot of privilege. I knew people who knew about Reba Place Development Corporation and I went there and applied for housing,” Courtney said. “I found myself on a six-month waiting list — sometimes it’s 12 months — and I was fortunate that something opened up quickly.”

Courtney continued by saying how Reba Place Development Corporation helped her get back on her feet.

“The price of the rent there is half of what most people will pay for a two-bedroom apartment in Evanston,” said Courtney. “I was able to save enough for the past two years to feel stable enough to feel like I could go to graduate school and support myself.”

Next month, Courtney said she will start a master’s in social work degree part-time at Loyola University Chicago.

Following Courtney’s remarks, Stone shared a transformative story of how Connections for the Homeless — a nonprofit organization that helps individuals and families who are homeless or threatened with homelessness to achieve stable housing — assisted her family after she fled from an abusive marriage.

“I ended up going from hotel to hotel with my sons — it was Connections who rescued us,” Stone said. “Now, my sons and I are thriving and I am honored to give back and serve this community.”

Stone currently serves on the board for Connections for the Homeless — the very organization she used to find housing.

Correction: A previous version of this story misstated which organizations Abigail Stone and Courtney each represent. Abigail Stone represents Connections for the Homeless and Courtney spoke on behalf of Reba Place Development Corporation. The Daily regrets the error.