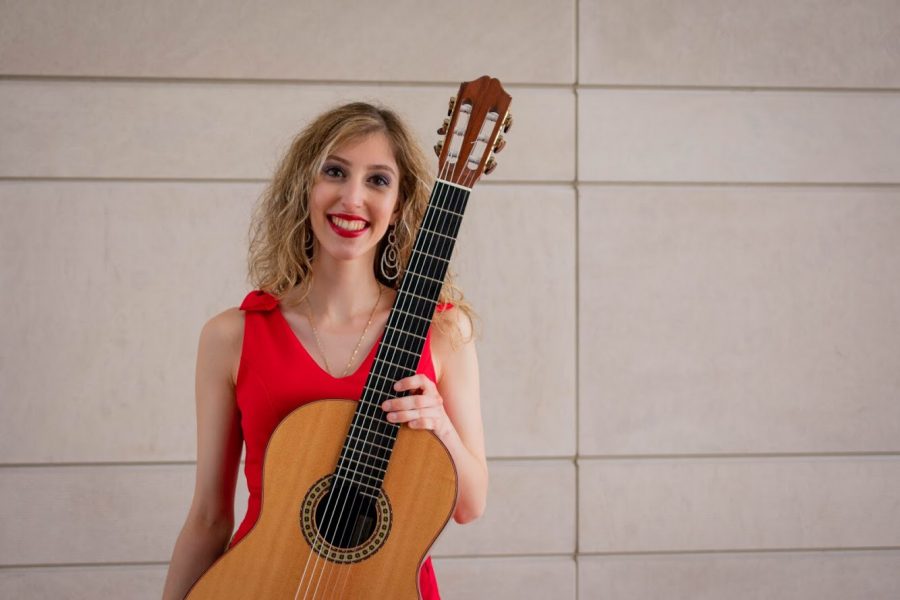 Marisa Sardo. The Bienen Senior will perform classical guitar in Salzburg and Amsterdam this July.

To an average college student, just the thought of being alone onstage in front of an audience is daunting at the very least. But for Bienen senior Marisa Sardo, there’s no place she’d rather be.

Now, through the Grand Prize Virtuoso International Music Competition, the classical guitar performance major has won her way into playing in iconic concert halls across Europe. She submitted a video audition recording of two pieces in early May, and was notified of her selection just a week later.

Sardo will first perform in Salzburg, Austria at Wiener Saal concert hall at Mozarteum University on July 11. Then, she will head to Amsterdam on July 16 to do the same at Kleine Zaal in the Concertgebouw.

“The fact that I won first place and am playing in both locations is huge for me,” Sardo said. “Out of first place, a handful was chosen to go perform in either Salzburg, Amsterdam, or both.”

According to the competition’s website, applicants came from 61 countries and were selected from five age categories. Sardo was a winner in the “Senior” grouping, which includes ages 19 and above. From her video audition, the judges chose “Tarantella” by Johann Kaspar Mertz — which Sardo considers her “all-time favorite piece” — as the song she will perform in both locations.

This is not Sardo’s first time earning an opportunity to play abroad. Last summer, she was selected to attend master’s classes in Siena, Italy at the prestigious Accademia Musicale Chigiana. She also performed while studying abroad in Milan the following fall.

“The most important thing for younger players is an opportunity to be heard,” Sardo’s professor Anne Waller said. “It’s also a great thing for our instrument that this is a place where she’s being presented.”

Waller, a senior lecturer in guitar performance, said classical guitar is unique because it has different strings than other guitar types. Instead of using steel like electric or folk guitars, classical instruments use nylon or carbon fiber. They are also strictly acoustic, and require all the player’s fingers in order to perform music with multiple parts.

The classical guitar world of the 1970s that Waller grew up with used to be very small, where “everyone knew everyone,” she said. Now, it has grown enormously.

“All over the world there are people playing the guitar at very high levels where you wouldn’t have found them 40 or 50 years ago,” Waller said. “Every school has a guitar program — and every conservatory. That really has become an established reality now.”

Sardo, who started playing when she was 4 years old, said she is excited to meet other guitarists from around the world. She enjoys connecting with other musicians who she can relate to, she added.

While Sardo hopes to eventually receive a doctorate’s degree in classical guitar and teach at the college level, she said these upcoming performances are a dream come true at only 21 years old.

“When I’m on stage, that’s who I am,” Sardo said. “I just know that this is the place where I’m supposed to be right now.”