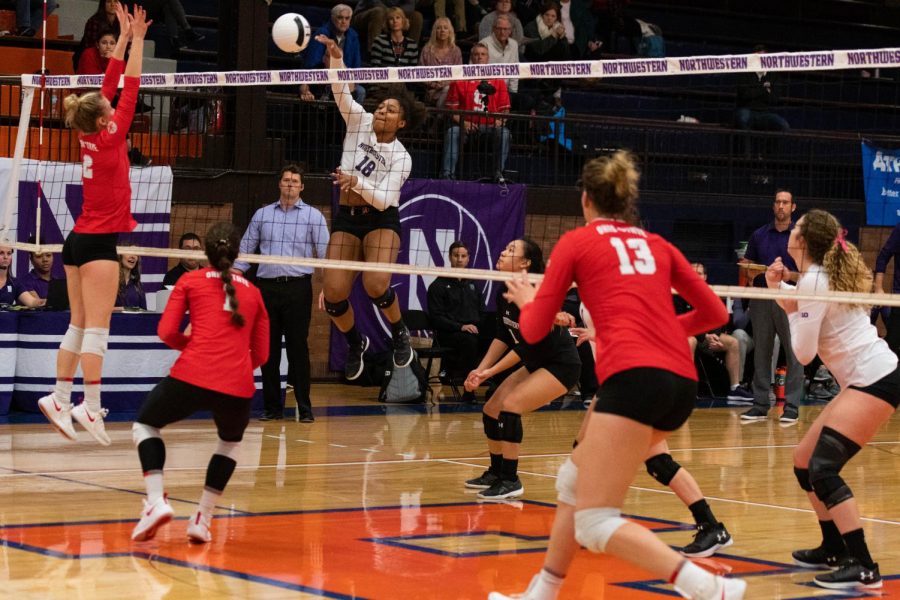 Nia Robinson spikes the ball. The outside hitter traveled to Japan as part of the Big Ten Foreign Tour Team in June.

Just last month, however, Nia Robinson got the chance to travel to Japan — and play volleyball while she was at it.

Robinson, a junior outside hitter, was part of the Big Ten’s Foreign Tour Team, which spent 12 days traveling throughout Japan and playing six games against local collegiate and professional teams. She was the only NU player on the roster, and her teammates came from 10 other Big Ten schools.

“We sat at a conference table when we first got there, so it’s nerve-wracking because you’re staring each other directly in the eye and it’s very formal,” Robinson said. “But it took us probably five minutes to break the ice, and we became best friends.”

The team was made up of entirely rising sophomores and juniors, meaning Robinson was one of the elder statesmen. She was elected captain of the tour team and will also serve as one of the Wildcats’ captains this fall.

Robinson said she asked her teammates from other universities for helpful tips they learned from their captains in order to bring more ideas to the table once she returns to NU.

“She got to work on her leadership skills and bring the group together,” Cats coach Shane Davis said. “It was good that that group saw her as a leader as well.”

The tour team lost five of its six games, but Robinson said the style of play was unlike anything she and her teammates were used to. She said the Japanese teams were much faster than the teams she had played against in college, and Davis added that the games in Japan were played with a lighter ball than the one used in the NCAA.

Robinson totaled 32 kills in the six games, including a team-high 12 in a loss to Ryukoku University in Kyoto on June 18.

“I was actually really proud of how our team played,” Robinson said. “Our first game, we’d just been on a flight for 19 hours, and you get off and you play a game. We were touring in the morning, walking 8 to 9 miles, and then we were hopping on a train to go play a game, so I was proud of everything we were able to accomplish in a short time.”

Robinson said the team was still figuring out how to play together in its first two games, while its opponents did not have that problem. But on June 20, the tour team scored a four-set win in its second of two games against the Denso Airybees, which Robinson considered the best team they played.

One day after losing in straight sets to the Airybees, the Big Ten group won a trio of tight sets en route to its only victory of the tour, with the decisive fourth set going to extra points. Maryland’s Erika Pritchard led the team with 16 kills, Indiana’s Breana Edwards added 12 and Robinson chipped in with nine.

“It was really good to see people grow through the trip and play so much faster,” Robinson said. “In the Big Ten, it’s a lot more height-oriented, but these teams were very fast.”

The team toured every city it visited, including Osaka, Kyoto and Tokyo. Robinson said the group visited several temples and shrines, but her top highlight was going to Tokyo Disneyland. The Big Ten surprised the team with tickets toward the end of the trip, and Robinson said it was a nice break for the tired group.

Davis said volleyball is a global game — it is popular at the college level in the United States, but the professional teams in Europe and Asia are even more well-known. He also said Japan was chosen as the destination to give the student-athletes a different experience. For the first Big Ten foreign tour in 2015, players traveled to Croatia, Slovenia and Italy, and in 2017 the group went to the Czech Republic, Slovenia, Italy and Austria.

Robinson traveled to Europe to play volleyball when she was 13, but had never been to Asia until last month.

“With this trip, it was great because we got to compete and still work on our craft, but we also got to experience life in Japan,” Robinson said. “We would talk to the players after almost every match, we would meet with them and communicate and learn about their lives and they would learn about ours.”